The Packers look to rebound from a 27-22 loss to the Giants last week with a home game versus the Jets, who are 3-2 and 2-0 on the road this season. This is the first meeting between the teams since 2018 when the Packers won 44-38 in overtime.

On the injury front, Jets linebacker Quincy Williams returned to practice this week after missing the previous two weeks and is expected to play. Defensive end Jermaine Johnson is out with an ankle injury. For the Packers, wide receiver Christian Watson is out with a hamstring injury, and Sammy Watkins will miss his fourth game with a hamstring injury.

Rodgers has completed 68 percent of his passes for 1157 yards and eight touchdowns. Romeo Doubs is the top target with 22 receptions. Randall Cobb, Allen Lazard, Robert Tonyan, and running back Aaron Jones should should all be targeted often. On the ground, Jones is first among running backs averaging 6.4 per carry and should be a factor. AJ Dillon leads the team with 63 carries and will probably share the load with Jones.

Defensively, Rashan Gary leads the Packers with 5 sacks, followed by Preston Smith with 3.5. The Packers have only one interception for the season and three forced fumbles.

For the Jets, running back Breece Hall has become a playmaker and along with Michael Carter have combined for 435 yards and 4 touchdowns on the ground. Quarterback Zach Wilson completed 14-of-21 for 210 yards in last week’s win over the Dolphins. Corey Davis and Garrett Wilson each have two touchdown receptions and the Jets have six players with at least 16 receptions.

The Jets have a relatively modest 10 sacks, but their secondary has been excellent, already intercepting seven passes, led by Lamarcus Joyner’s two. The Jets have also forced five fumbles, recovering two. Aaron Rodgers versus the Jets secondary should be the key matchup in this game. He hasn’t been intercepted at least 10 times in a season since 2010. If the Packers can avoid turnovers, they should come out on top.

The Packers are a 7.5-point home favorite. 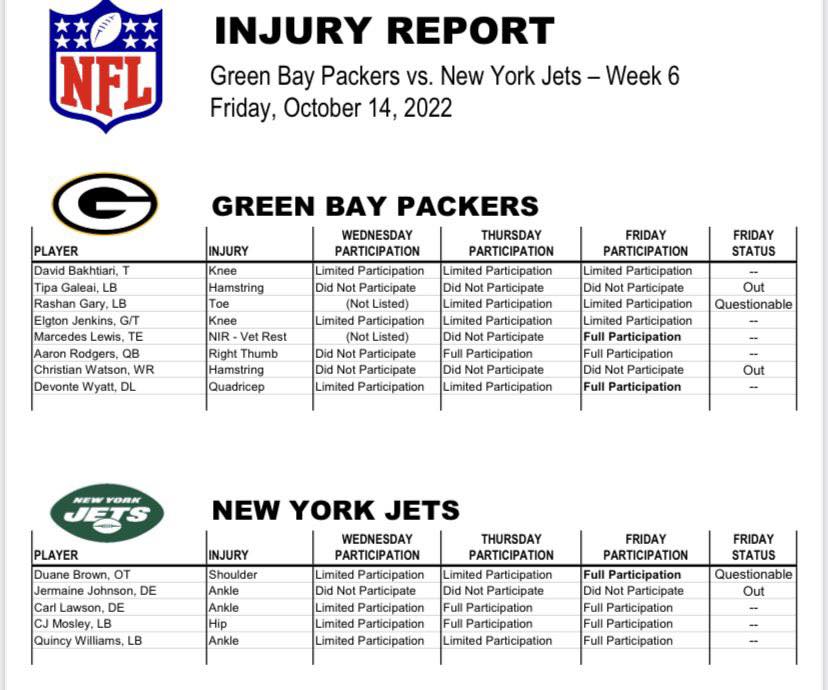 I’ve spoken to some people within the #Packers organization, they told me that QB Aaron Rodgers has “made it clear” that he plans to retire following the season. pic.twitter.com/XAyHX5Etl1