Linebacker Nick Perry has once again become an injury story for the Green Bay Packers. Perry has been injured regularly during his time with the Packers. His 2018 production was more or less nonexistent and then he went on injured reserve.

There were excuses before that, however. Perry’s lack of production was supposedly the result of offseason ankle surgery. Perry finished his season with 24 tackles and 1.5 sacks. Not exactly what you’re looking for from a guy you’re paying $11.8 million annually.

The contract, at this point, is an albatross.

Perry, who has been oft-criticized, pointed out that his latest injury — the one that ended his season — was a fluke. And it would be hard to say that it wasn’t. Or that it wasn’t severe. It happened against Miami.

Yes, Nick Perry has had a lot of injuries and his days in Green Bay might be over given his contract, but he told @jasonjwilde and me to go back and look at the play vs. Miami where he got hurt. So here it is. Not sure what he could’ve done to prevent it. pic.twitter.com/E3miDsofWS

That being as it may, the contract. 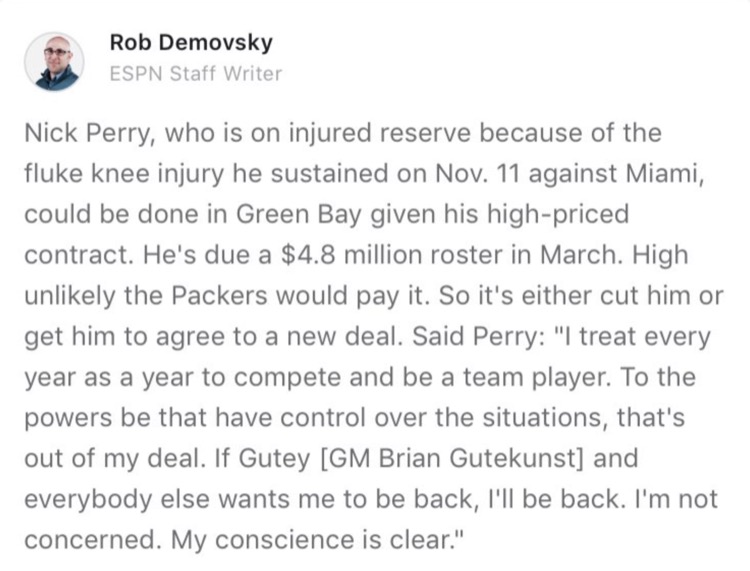 According to USA Today, the Packers would save $3.6 million in cap space if they ditched Perry before June 1. They would save $11 million if it were after June 1. They can designate him as a post-June 1 cut — each team gets two such designations — and cut him before June 1 and still reap the same savings. Unfortunately, that money doesn’t become available until June 1.

If that scenario plays out, it makes for a real interesting outside linebacker group going into 2019. Clay Matthews’ contract expires after the season. The only other outside linebackers on the roster are Kyler Fackrell and Reggie Gilbert.

Fackrell has come on in his third season, with eight sacks thus far. Gilbert hasn’t really been what we hoped for — 28 tackles and 2.5 sacks thus far.

But the Packers will need some bodies at the position, regardless. There is no guarantee they re-sign Matthews. He only has 2.5 sacks this season and appears to be near the end of the line.

The Packers would have to bring in reinforcements from outside, either through free agency or the draft. Probably at least three of them.

All we know at this point is the Packers can’t count on Perry. Whether it’s a fluke play or not, the guy can’t stay on the field. This is going to be an interesting offseason.