El recent Total Packers post by Joseph Bonham, the gist of which is that Green Bay Packers GM Ted Thompson is losing his mental sharpness, was met with widespread agreement. I don’t want to zoom off into wild speculation, but I think there are some rational deductions that can be made based on Bonham’s premise.

The NFL is a business. All NFL teams have annual player payrolls of around $140 million. Business people simply aren’t going to entrust vital player acquisition decisions solely to a person of questionable mental acuity.

Packers’ president Mark Murphy is open to criticism on a number of grounds, but he’s smart (MBA in finance and law degree), he’s experienced (in his 10th year as chief executive), and he would certainly act if his general manager was indeed “losing it.” I suspect CEO Murphy has acted, but has done so quietly.

Over the weekend, television cameras took us into the “war rooms” of many of the league’s teams. Generally, there appeared to be from 12 to 20 people either staring at computer screens or seated around large conference tables.

A still photo ran at the top of this site’s funny 4/17 posting titled, “What Really Goes On In Packers’ Draft Room?” The image shows CEO Murphy, coach Mike McCarthy, and Thompson pow-wowing near the refreshments in the back of the room. Meanwhile, the others are hard at work, manning their laptops and phones. 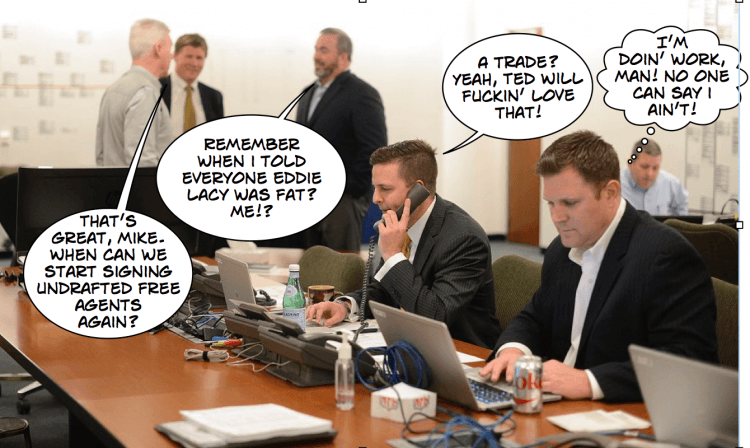 While Thompson might retain the title of general manager, my guess is that picking the team’s draft choices has evolved into a group dynamic. To start with, the Packers’ website lists at 17 names under the banner of player personnel. While several are scouts, at the top are these four: Eliot Wolf, director of football operations; Brian Gutekunst, director of player personnel; Alonzo Highsmith, senior personnel executive; and Jon-Eric Sullivan, director of college scouting.

Candidates Waiting in the Wings

We can assume that Wolf and Gutekunst, in particular, are good at what they do, because each has been looked at as the potential general manager of other teams in the league.

Wolf, who’s been with the team since 2004, and whose father was the team’s GM from 1991 to 2001, has been on the “short list” of candidates for general manager positions around the NFL. In 2016, he was reportedly Detroit’s first choice as their next GM, but the Packers denied the Lions’ request to interview with them. Earlier this year, however, he was allowed to interview with the 49ers for their GM opening.

Gutekunst has steadily progressed through the ranks during his 18 years with Green Bay. After being a college scout for 13 years, he became director of college scouting from 2012-15, and was promoted to his current job in March 2016. He too was interviewed for the GM job with the 49ers.

Given all the personnel experience and expertise the Packers possess, and the obvious slowing down of Thompson, I don’t think it’s much of a stretch to assume that Thompson, Mike McCarthy, Dom Capers, the above four player personnel guys, and probably with Mark Murphy observing, are keenly involved in the draft process. I would guess that they assemble and winnow down their draft lists by position, by overall need, and probably by a best overall player rankings too. In most cases, I would think there is a clear preference for one player over another. When there isn’t they might actually have a show of hands.

When there are strongly differing views, I imagine that McCarthy and Capers, by virtue of their many years with the team and their records of success, have even more influence than the personnel guys.

The suggestion that McCarthy and Capers aren’t fully involved in the process seems absurd.

I’ve left Ted Thompson out of the equation. I don’t doubt that Ted has all the input he wants, but it’s my guess that most decisions are reached by the above committee approach, with Thompson then giving his blessing to the group’s recommendation. It’s possible that when two or more factions have stalemated, Thompson acts as tie-breaker.

On the draft days, I’m sure there is a flurry of activity when it comes to arriving at trade deals that have to be worked out in a matter of a few minutes. No way is slow-talking Ted the guy holding the phone in these rapid-fire situations. In the few cases that the player the team has targeted is picked off shortly before the Packers go on the clock, there is usually a Plan B or Plan C that goes into effect based on charts pre-determined by the group.

The final bit of deduction that makes me think this scenario is close to what actually occurs has to do with the unique personality of Ted Thompson. Thompson certainly doesn’t come off as a dictatorial, bullying or obstructive kind of guy. He has to know he’s no longer able to keep up with most of the dozen or more guys in the room. And finally, I’ve never heard anyone say that Ted puts his own interests or ego ahead of his desire for the team’s success.

After all is said and done, Thompson is a “team” guy who’s been with Green Bay for 25 years now. The Packers are Thompson’s family. By quietly relegating himself to a figurehead, or mostly ceremonial role during draft days, he must be aware that he’d be acting in his team’s best interests.

It would also be in the team’s best interests for him to now honorably retire.