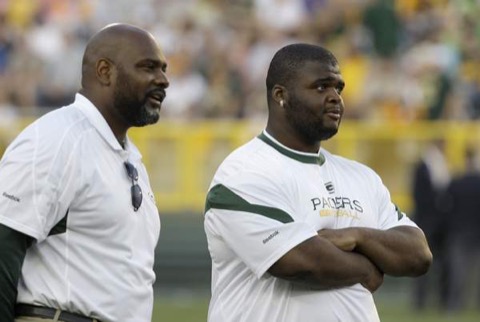 The Journal Sentinel released a report on Green Bay Packers defensive end Letroy Guion’s questionable history with domestic violence last Sunday. The report did not paint a pretty picture and the Packers’ brass, as we have come to expect, refused to comment.

That is, until Monday when coach Mike McCarthy called it “garbage,” while, it should be noted, also refusing to comment.

The report made the Packers organization look stupid. Simply, they either failed to sufficiently look into Guion’s past before signing him or they were aware of what appears to be a troubling pattern and swept it under the rug in hopes that no one would find out. Then they decided that hey, how dare you question us. We do no wrong and therefore will refuse to address the matter.

And of course none of their local media lap dogs pushed the issue. Why would they? They’re on the inside, livin’ the dream!

And that’s typical. There’s no one to hold the people who run the Packers organization accountable. There’s no owner upstairs signing the checks and the team’s actual owners have no say over anything. The organization is run in a vacuum where those in charge can do whatever the fuck they want and not have to pay — or even answer for — anything the rest of us may find questionable.

And in a clear example of much they look down on their fans and “owners,” those in the upper tier of the organization at once talk about the “Packer way” and how they only look for high-character guys and continue to employ guys like Guion and gun-toting, foliage aficionado Andrew Quarless.

Look, we’re all for second chances, but we’re also for accountability. It sure as shit isn’t too much to ask someone in a position of power to explain themselves and expect an answer.

Today, Bob McGinn dropped another bomb on the Packers leadership. McGinn also writes for the Journal Sentinel and has covered the Packers for a long time. Unlike most of the scrubs who cover the team, here’s a guy whose knowledge of the game, ability and writing we actually respect.

He isn’t afraid to write it as he sees it.

McGinn’s piece details how the Packers — like most other teams — take on character risks all the time, despite all their talk about the Packer way. He lists Colt Lyerla, Johnny Jolly, Guion and Quarless.

He also details the lack of accountability at the upper levels of the organization.

We were well aware of these things. We’ve pointed them out many times, but it’s nice to see someone else take notice of the hypocrisy.

The really damning part of the report is this, however.

On Monday afternoon, the Journal Sentinel’s Michael Cohen, one of the two writers on the Guion story, was on the sidelines covering practice. Rob Davis, the team’s director of player engagement since 2008, continually gestured and stared in Cohen’s direction.

When Cohen was looking down at his roster taking player attendance, Davis came over and placed his head about a foot from Cohen’s head. Startled, Cohen introduced himself to Davis and extended his hand.

“No, we haven’t met,” said Davis, refusing to shake Cohen’s hand. “And I don’t want to know you.”

Later, Davis told me he confused Cohen with another reporter. That’s a reporter he has known for about 20 years and outweighs Cohen by at least 50 pounds.

Davis, a one-time bouncer for Dennis Rodman, is part of the team’s inner circle and a first contact for players, wives and girlfriends on all types of issues. One interpretation is Davis bullied Cohen, and in a league with many anti-bullying initiatives his actions were regrettable, to say the least.

Now, that sure sounds like some bullshit on the Packers part.

Did someone put Davis up this or did he act alone? We probably won’t ever know, although the ham-fistedness of it suggests it’s probably Davis acting alone.

Now that this has been reportedly publicly, we will know what the Packers will do about, however. The organization’s M.O. up to this point suggests they’ll just pretend there’s no issue and wait for people to forget about it, safe in the assumption most people think they can do no wrong.

Will that happen in Green Bay?

The Packers organization can do wrong and someone has to hold them accountable for their bullshit. There isn’t anyone else to do it besides you, me and the Journal Sentinel.