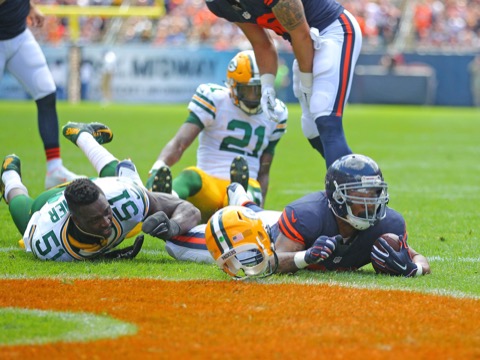 The Green Bay Packers pulled out what was a fairly nondescript 31-23 win over the Chicago Bears on Sunday.

That is, at least from an offensive standpoint. No one really went out there and lit it up.

About as close as anyone came to that was running back Eddie Lacy, who carried 19 times for 85 yards and added two receptions for 14.

Maybe that’s the reality without Jordy Nelson on the field. And maybe Randall Cobb not being at 100 percent also had something to do with it. The Packers will spread the ball around and grind it out.

Hopefully, they’ll get some more help from the defense in the future. And one of these days, maybe those guys will learn how to tackle, but Sunday was clearly not that day.

At any rate, here’s where we single out five things that stood out during the game.

James Jones can still catch the ball
Everyone is jumping on the James Jones bandwagon today and that’s fine. The guy caught two touchdown passes a week after being brought back to the team. We’re not going to anoint Jones as the second coming of Don Hutson, but we will say this. He is clearly an upgrade, at least right now, over Ty Montgomery, Jeff Janis or Myles White as the No. 3 receiver. The knock on Jones is that he’s lost a step and he probably has. It certainly doesn’t look like he’s out there blowing by guys like he used to. He can still catch the ball though. Jones’ two touchdowns were both good grabs, especially the first one, where he had a DB all over him and was inches from the sideline. It helps when you have the most accurate quarterback in the game, but not a lot of guys make the play on that first touchdown catch. James Jones still has something left to give.

Julius Peppers: still a boss
There were really only two guys who stood out in a good way on the Packers defense on Sunday — Clay Matthews and Julius Peppers. And Peppers was head and shoulders above Matthews. It was the kind of borderline dominant performance that you really don’t expect Peppers to turn in at 35 — five tackles, 1.5 sacks, one TFL and two QB hits. Matthews had the interception that essentially sealed it, but he probably wouldn’t have had that opportunity if it weren’t for Peppers’ play.

Ty Montgomery: doin’ work
The rookie wasn’t involved in the Packers offense, but he certainly did his part in putting the offense in great field position. Montgomery returned three kicks for 106 yards, which is a 35.3-yard average. It’s one game, but here’s an interesting comparison. In Randall Cobb’s best season as a kick returner, he averaged 27.7 per return.

We’re giving the Bears some credit
We pretty much wrote the Bears off as being in the general vicinity of the worst team in all of football. Well, that doesn’t appear to be the case. The Bears gave the Packers a decent game in one that everyone thought would be a blowout. They had a great game plan. Run the football (because everyone knows the Packers will NEVER be able to tackle Matt Forte) and control the clock. It became much more even at the end, but Chicago still held a three-minute advantage in time of possession at the end of the game. They dominated the ball in the first half, en route to taking a 13-10 halftime lead. It looks like the Bears are going to be better than anyone thought and maybe they finally have the right coaching staff in place.

The good, the bad and the ugly
Good: The Packers were uncharacteristically efficient in two areas where they never seemed to be efficient last season — in the red zone and in goal to goal situations. They were 4-for-5 in the red zone and 2-for-2 in goal to goal. Bad: 10 penalties is a pretty piss poor number. Ugly: The Bears averaged 5.7 yards per rush. They only averaged 5.6 yards per pass play. That, is disgusting.