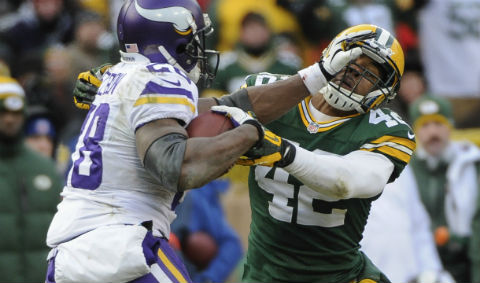 We could dream, couldn’t we? Of course we could, but that dream has now, officially been shattered. Morgan Burnett is definitely starting at safety for the Green Bay Packers this year.

“Morgan’s our starting safety,” safeties coach Darren Perry said Wednesday. “And the other guys are competing, unless I’ve been told differently.”

I think you mean “unless I’m told differently,” Darren.

At any rate, we suspected the Packers had handed Burnett a starting job, despite coming off a truly disgusting campaign, and now that has been confirmed. Doesn’t matter how badly Burnett plays or how well someone else plays, Burnett is starting anyway. Obviously, that’s the totally logical way to make any decision: because.

Competition? It’s not proven that competition brings out the best in the individual or even puts the most-deserving person in a defined role. Those are just “theories!”

We’ve got no time for such crazy “theories” in Green Bay!

Interestingly, no one has even bothered to sugarcoat it. Perry didn’t cite Burnett’s stellar play (probably because everyone would laugh in his face) for the reason he’s going to start. He cited Burnett’s experience.

“He’s one of our communicators,” Perry said. “He’s a leader on this defense. He knows it about as well as anybody back there. I would expect him to be able to command and communicate amongst the other guys in terms of what calls and what coverages and what checks we’re supposed to be in. That’s the standard operating procedure for him.”

The funny thing is, the Packers secondary consistently has communication breakdowns. How many times do you remember some receiver running wide open on a deep route last year because some guy dropped off his coverage too soon or some other guy didn’t give help over the top?

We don’t have a number, but it happened a lot.

You’re telling me that could actually get worse?

And are you also telling me no one else could possibly figure out all of these calls and coverages?

Micah Hyde is obviously deserving of a starting spot. The Packers picked Ha Ha Clinton-Dix in the first round. Sean Richardson is having as good a training camp as anyone.

In a normal environment, those four guys would all have a shot at both starting spots and let the best two win.

Oh, I forgot. The Packers just gave Burnett a totally-undeserved $25 million contract prior to last season. They HAVE to start him, lest someone look foolish.

Julius Peppers will Start Playing When He Feels Like It