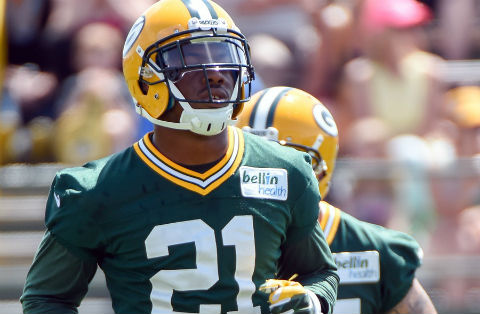 We predicted that, in time, Micah Hyde and Ha Ha Clinton-Dix would be starting at safety for the Green Bay Packers. Well, that day is not here yet, but the two did spend some time on the field together on Monday.

Unfortunately, it was only in a sub-package, which means that as we also predicted, the Packers will be sticking you with Morgan Burnett again whether you like it or not.

Here’s how it breaks down currently. Burnett and Hyde are the starters. Clinton-Dix, who the Packers spent a first-round pick on, has gotten minimal work with the No. 1 defense… in place of Hyde, of course. The three safeties have also spent a little time on the field together though.

Why, buffoonery, of course!

Hyde and Clinton-Dix are probably going to end up sharing snaps, much like the dynamic duo of M.D. Jennings and Jerron McMillian did two years ago.

Now, clearly Hyde is the best player of all the safeties right now. You would think you’d want him on the field all the time. But no, not the Packers.

They want Morgan Burnett on the field at all times because he was one of their worst players last season, but this is totally his year!

Also, don’t want to make anyone look bad — anyone who might have given that guy a huge contract extension — by taking Burnett off the field. I mean, he’s clearly an All Pro in the making. That contract proves it!

Yeah, we know. It’s early, but this movie looks like one we’ve already seen. All offseason we hear about competition. Then training camp rolls around and certain guys just get handed starting jobs.

We don’t want you to earn this or be forced to improve upon your performance from last year. Just get out there! You’re our guy!

It certainly looks like the Packers have decided to hand Burnett a starting job this year, despite the presence of two guys who might well be better safeties.

DuJuan Harris is Too Damn Big for that Bike!

DuJuan Harris is Too Damn Big for that Bike!