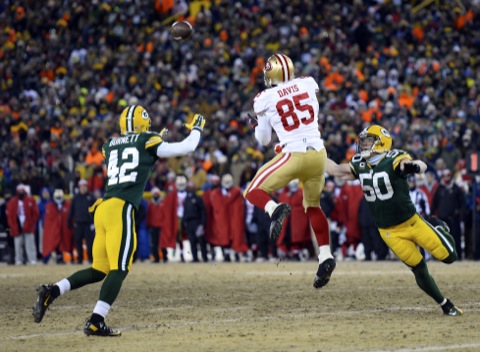 So what’s the problem with Morgan Burnett? After signing a contract extension that paid him more than $5 million per year in the summer of 2013, Burnett went out and and turned in his worst season since he became a full-time starter.

“You know, I don’t think it’s, ‘Oh my God, he’s a bust,’” McCarthy said. “It’s nothing like that. I think the guy needs to – and I think he will – he’ll be coached to make more impact plays. That’ll be his emphasis next year, and he’s the type of guy that will do it. The guy will go about it. He’s a pro. I wish he’d be more assertive, but that’s not really his personality, either. He’s a soft-spoken young man.”

McCarthy pointed to a specific instance in the playoff loss to the 49ers where Burnett failed to break up a pass to tight end Vernon Davis, even though he was in perfect position to do so.

“I look at the San Francisco game, he’s got to make that play,” McCarthy said. “To me, it looked like he didn’t know whether to go hit him or go for the ball.

“That’s not a confident [action],” McCarthy added. “I mean, playmaking, you go get the football.”

So, not assertive enough and lacks confidence. Just the guy you want quarterbacking your defense.

Hey, we heard Nick Collins wants to come out of his forced retirement.

That’s probably not going to happen, of course. At least with the Packers. So we’ll just have to wait around and see if Burnett improves.

If he doesn’t improve and McCarthy doesn’t want to call him a bust, we’ll be happy to.

James Jones Won’t Be Back with the Packers

James Jones Won't Be Back with the Packers