Packers Will Go With Two Running Backs on Sunday 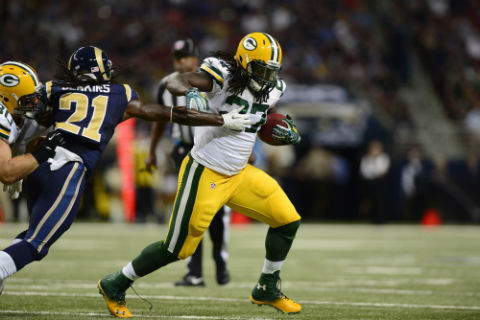 Nothing has changed on the injury front for the Green Bay Packers, which means they’ll be light at running back on Sunday.

Both Eddie Lacy and John Kuhn sat out Friday’s practice. Lacy is listed as questionable with a concussion, but coach Mike McCarthy said yesterday he’d need to practice on Friday to play on Sunday. Kuhn is out with a hamstring injury and is listed as doubtful, meaning tight end Andrew Quarless is your fullback this week.

It also means James Starks and Johnathan Franklin are the only healthy running backs. So hopefully Starks doesn’t suffer his annual injury this week.

And last, but not least… or yeah, probably least… cornerback Jarrett Bush sat out practice on Friday, as well. He has… wait for it… a hamstring injury!

The secondary will have Tramon Williams and Sam Shields at the corners and most likely Davon House in the slot. M.D. Jennings will be joined by Jerron McMillian and undrafted rookie Chris Banjo will likely also see some playing time.

Brett Favre Did This 21 Years Ago Today