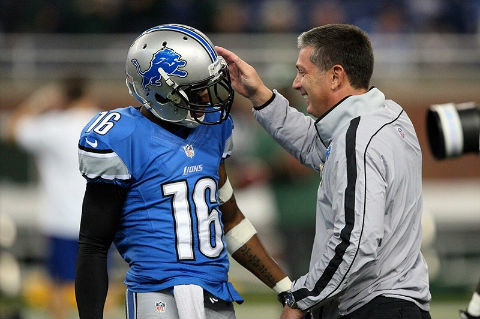 El Leones de Detroit are a high-quality organization. No one epitomizes that more than receiver Tito Young.

You know, the guy who got suspended for sabotaging plays against the Los Packers de Green Bay. Also the same guy who punched one of his own teammates.

What’s Tito Young up to now you ask?

He’s letting everyone know that if he doesn’t get the ball, he’s not going to play football anymore.

That’s the team-first attitude we’ve come to expect from the Lions, especially Young. He went on to claim he’s never sabotaged a play.

They put Young on injured reserve toward the end of the season even though everyone knew he wasn’t really injured. Most people figured the Lions would get rid of Young in the offseason, but coach Jim Schwartz has softened his stance on the former second-round pick since the season ended.

Let’s face it. This guy was meant to be a Detroit Lion.

And since we’re talking about idiocy, our favorite member of the team, Ndamukong Suh, will soon be fattening up your TV screen. He’ll be appearing on Celebrity Diving.

Be sure to set your DVR!

Packers No Longer Among League’s Worst on Special Teams