The White Elephant in the Room 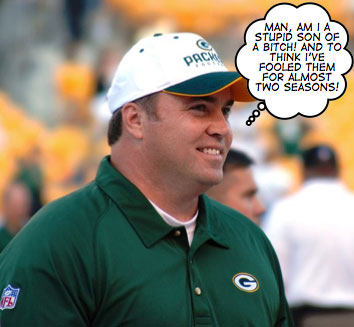 Most everyone is quick to point the finger at defensive coordinator Bob Sanders as the scapegoat in this dismal Green Bay Packers’ season. And the proverbial finger has good reason to be pointed in Sanders direction, especially after a disgusting 24-21 home loss to the Houston Texans, in which the defense was carved up for 549 yards.

It makes me throw up in my mouth a little bit every time I think about it.

This, of course, is the same defense that had 51 points dropped on it two weeks ago in New Orleans, on national television, and that lost at home to rookie-quarterback-led Atlanta, 27-24.

Understandably, the heat is on Sanders.

Taking a quick look around the Interweb, the displeasure is brewing.

In a (totally unscientific) poll at Football’s Future, 82% of fans called for Sanders’ head.

On the Sportsline Forum, fans are calling for both Sanders and special teams coach, Mike Stock’s jobs.

Mike McCarthy, meanwhile, is standing by his man.

“When the defense is called, we need to play the defense,” McCarthy told the Journal Sentinel. “No different on offense. As long as we’re not putting our players in bad angles, overload situations and things they can’t win in, that’s really I think the key to evaluating your game plan.”

Let’s be realistic. The defense is bad, in part due to injury. But remember that even before the Packers lost Cullen Jenkins, Nick Barnett, and cut KGB, their defense wasn’t stopping the run and it wasn’t getting pressure on the quarterback. It was supported almost entirely by the outstanding early play of the secondary.

Should Bob Sanders be held accountable for that? Absolutely.

Should Mike Stock be held accountable for the Packers’ (outside of the occasional Will Blackmon flash of brilliance) terrible special teams play this year? Damn right.

Which brings me to the white elephant himself – Mike McCarthy.

It baffles me why no one is calling for the head coach’s job. The Green Bay Packers were a 13-3 team last year. They were one game away from the Super Bowl.

This year, with essentially the same personnel – many a year older and wiser, the Packers are an underachieving, discipline-lacking, losing-to-teams-they-should-beat-at-home, shell of last year’s team.

If anyone wants to tell me that a new defensive coordinator and special teams coach is what it’s going to take to remedy all of that, then I say you are a fool.

Not only do the Packers lack discipline, they lack any sort of fire. Oftentimes, they seem to lack confidence. The Packers certainly don’t have a swagger, and after pounding visiting teams into submission last year at Lambeau, they’re now getting pounded on hallowed ground.

The Packers head coach is responsible for all of these things and too many times at the end of the day, he hasn’t delivered.

This is to say nothing of the bone-headed play calling that often makes me want to rip my hair out, or the seeming complete lack of understanding of the term “half-time adjustment.”

We are not the Green Bay Packers this year, and for that, I hold Mike McCarthy responsible.

So let me be the first to say publicly what everyone else seems to be afraid to.

Fire Mike McCarthy, and give me some Green and Gold football where an opposing team comes into Lambeau and gets punched straight in their fucking mouths for 60 minutes!