Forbes released their annual valuation of NFL teams on Friday. The Packers ranked 16th, with a total valuation of just over $1 billion, which isn’t bad for a small-market franchise. Dallas came in first at $1.6 billion.

The Packers valuation is a 10 percent increase over last year, although analysts predict the team will take a hit in merchandising revenue this year due to the lack of some guy who wore #4.

But the bottom line in the post-Brett Favre era could get a bit smaller as a result of lower merchandise sales. Number four jerseys were a hot commodity at the team’s store, helping to push marketing revenue up 23% last year, to $50 million.

The rest of the NFC North rankings were fairly predictable, with the Bears ranking ninth at $1.1 billion, the Lions ranking 24th at $917 million, and the Queens coming in dead last at $839 million.

We’ve heard the Queens have been hurting for years, largely because of that atrocity known as the Metrodome, and unfortunately, owner Groucho Marx doesn’t appear any closer to remedying the problem.

It looks like the Minnesota Vikings will not be getting a new stadium any time soon unless team owner Zigi Wilf is willing to forgo large taxpayer subsidies. In April the state Senate turned down a proposal for a $2 million study on how to replace the Metrodome with a $954 million stadium 75% funded by taxpayers.

So, you’re telling me that Minnesotans are a bunch of poor deadbeats that talk a big game, but can’t back it up with any substance? 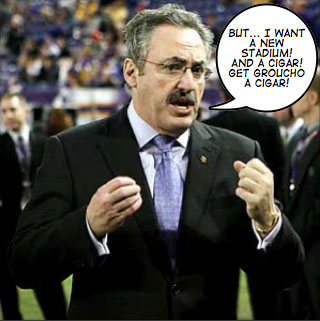 Lions – Trap or Statement For Packers?