The Packers head into their game on the road against the Commanders looking to rebound from a two-game skid. Their 27-10 loss to the Jets at home has been the low point of the Packers 3-3 start. Washington enters play last in the tough NFC East with a record of 2-4. Green Bay is currently a 5-point favorite.

Aaron Rodgers has completed 67 percent of his passes for 1403 yards and nine touchdowns, but has been sacked 15 times. Allen Lazard has stepped up to be Rodgers’ biggest touchdown threat, scoring four times on his 20 receptions. Robert Tonyan and Romeo Doubs have surpassed 20 receptions. On the ground, Aaron Jones and AJ Dillon have shared the load. Jones has 409 yards on 70 carries and Dillon has 286 yards on 73 attempts.

Defensively, Rashan Gary is having a Pro Bowl type season with six sacks, a forced fumble and 26 tackles. The Packers continue to be woeful at forcing turnovers with only a single interception and three forced fumbles on the season.

For the Commanders, Carson Wentz is out with a broken finger. Up steps Taylor Heinicke, who threw for 3419 yards and 20 touchdowns with 15 interceptions last season. He will probably look for Curtis Samuel as his primary target. Samuel has 34 receptions and two touchdowns. Terry McLaurin is the biggest deep threat, averaging nearly 17 yards per catch. Rookie Jahan Dotson has four touchdown receptions but is listed as questionable for the game. On the ground, the Commanders rely on Antonio Gibson, who has 214 yards and two touchdowns, but averages only 3.5 per carry.

Defensively, the Commanders can apply pressure, recording 19 sacks as a team, led by Jonathan Allen and Daron Payne with 3.5 each. Much like the Packers, the Commanders haven’t forced many turnovers, having intercepted only two passes and recovered one fumble.

Both teams are near the bottom of the league in turnover differential. The Packers are –4 and the Commanders are –5. 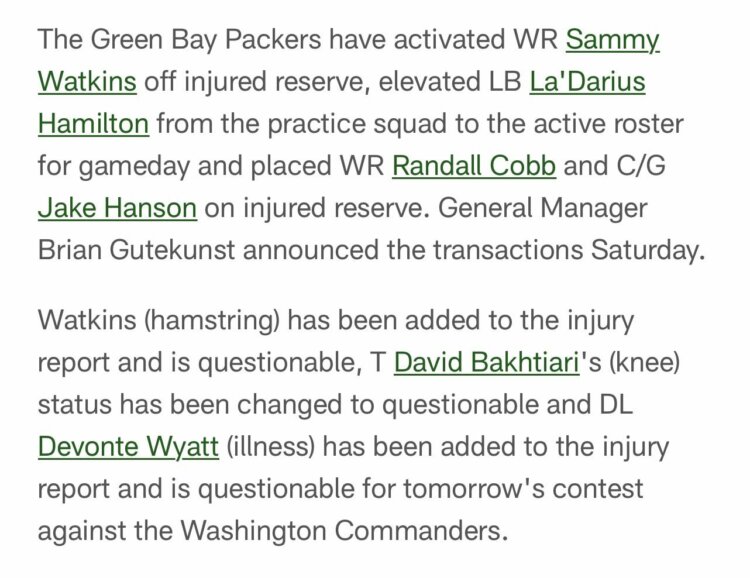 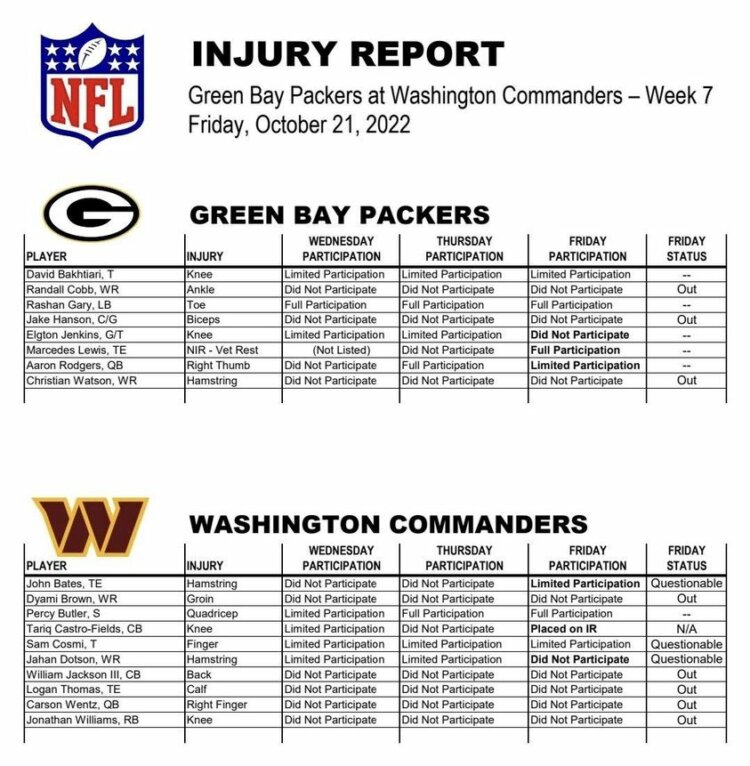 WR Sammy Watkins Should Be Active

Packers anticipate that WR Sammy Watkins, who was activated off IR on Saturday and is listed as questionable for today, will be available to play vs. the Commanders. One more wideout for Aaron Rodgers.