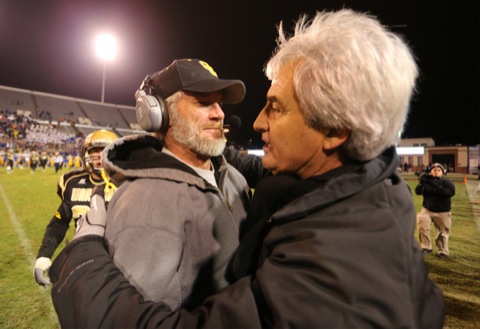 We’re sure you’ve heard something about this because, look, we know you secretly love you some Brett Favre. You know, greatest Minnesota Vikings player of all time. Third-greatest Green Bay Packers quarterback of all time.

In any case, old Farvealicious has been coaching himself some football. High school football! And what were those kids destined to do?!

Win it all, of course!

Either that, or get close to winning it all before their quarterback threw an inopportune pick at the last second. One of the two!

And they actually won despite Brett Favre being their offensive coordinator.

Brett Favre. The old cockslinger. He’s coaching the offense for some high school team in Mississippi.

How do you think that goes?

“Hey, listen, when the pocket breaks down, who gives a shit!? Just sling that fuckin’ ball out there like you mean it! You’re just like a kid out there! You’re just havin’ fun!”

Anyway, old Favrelous compared it to a Super Bowl.

“I can’t say it’s a Super Bowl, but it’s pretty close,” said Favre. “It really is. It’s a different kind of feeling, but I’m awfully proud of these kids.”

In any case, yeah, we go out of our way to make fun of Brett Favre. But hell, good for those kids and good for that fucker for doing something for someone else (other than the Packers’ opposition). We’re totally sure he had nothing to do with the state championship, but let’s throw it the fuck up anyway.