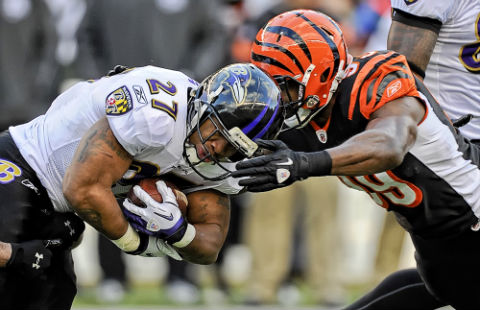 Die Green Bay Packers were reportedly interested in Cincinnati Bengals free agent outside linebacker Manny Lawson, but it doesn’t look like they’ll be signing him.

Lawson is telling teammates he has a deal in place to return to Cincinnati.

Although they didn’t bring him in for a visit, the Packers at least inquired about Lawson. The team is looking to improve the outside linebacker spot held down by Erik Walden, Frank Zombo und Brad Jones last season. Walden is a free agent and isn’t expected to return.

Lawson wouldn’t have done much to improve the Packers’ anemic pass rush — he has only 16 sacks in six pro seasons — but is solid against the run and in coverage, two other areas the Packers weren’t particularly good in last season either.

Still, he probably would have been an upgrade over Walden, who seemed to regress as the 2011 season wore on.

If the Packers do bring in a free agent at the position, it may be New York Giants defensive end Dave Tollefson. He’s scheduled to visit the team on Thursday.