Packers hold a 13.3% chance to make the playoffs, according to The Athletic

by Andrew Rockman
in Articles & Analysis
23

The 2022 NFL season hasn’t gone as planned for either the Packers or the Rams entering their week 15 contest. The Rams are coming off a 17-16 win to end a six-game skid and are 4-9 on the season. Meanwhile, the Packers are just 2-7 over their last nine and 5-8 on the season. Green Bay won last year’s meeting between the teams, 36-28, and are 7-point favorites at home in this one.

The Rams are led by quarterback Baker Mayfield, who went 22-of-35 for 230 yards and a touchdown in his only start. Without wide receiver Cooper Kupp, who has been out for the last month, Mayfield’s top target against the Packers’ 5th ranked pass defense is tight end Tyler Higbee. The Rams should have a better chance moving the ball on the ground against Green Bay’s porous run defense that is third from the bottom, allowing 155 yards per game. The problem for the Rams is they are averaging only 86 yards per game rushing, third worst in the NFL. Cam Akers leads the Rams with 376 yards rushing, but only averages 3.3 yards per carry.

Rams’ HC Sean McVay told reporters that QB John Wolford has a neck injury expected to sideline him Monday night in Green Bay. This means the Rams’ starting QB vs. the Packers, to no one’s surprise, will be Baker Mayfield.

Aaron Rodgers is having a solid season with 2864 yards passing and 22 touchdowns, but has thrown an uncharacteristically high nine interceptions, his highest total since 2010. Allen Lazard, Robert Tonyan, and rookie Christian Watson have been Rodgers’ primary targets, connecting with the trio 115 times. Watson has been the big-play threat, scoring seven times on 25 receptions. The Packers should have success through the air against a Rams’ passing defense that is in the bottom half of the league in yards allowed.

On the ground, the Packers are led by the duo of Aaron Jones and AJ Dillon, who have combined for nearly 1500 yards and five touchdowns. Green Bay’s 12th ranked rushing attack will be tested against the Rams’ 5th ranked run defense which allows a shade under 100 yards per game.
On special teams, Mason Crosby is 15-of-18 on the season but has made just 3-of-6 from beyond 40 yards. For the Rams, Matt Gay has been outstanding, hitting 19-of-21, including 4-of-6 from beyond 50 yards.
As is the case with most NFL games, the turnover differential will be key. Green Bay is –2 on the season, while the Rams are third from the bottom at –6.

Biggest hurdle to Packers winning out is the defense, in my opinion. They get the Rams on Monday night but then three straight games against top 10 scoring offenses.

Romeo Doubs’ Return for the Rams is Much Needed 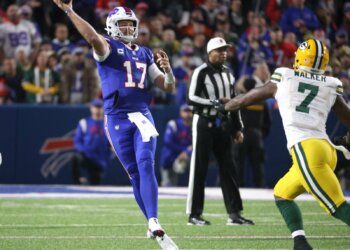 Romeo Doubs' Return for the Rams is Much Needed