by Jason Parker
in News and Rumors
26

After the Packer defense stuck it to Tom Brady in front of a home crowd in Tampa Bay, they get to return to Lambeau Field to host the New England Patriots. Packers vs Patriots isn’t something that happens often, and this will be the first meeting since 2018.

Joe Barry and his 2022 defense has been quite impressive and any lingering doubts were quelled after last weeks victory over the Tampa Bay Buccaneers on the road.

The Patriots are more of a running team these days, specifically a run game by committee, with RBs Damien Harris and Rhamondre Stevenson averaging 4.8 yards a carry(Packers defense has allowed 4.9 yards per carry so far this season — a stat driven up a bit by the fact they allowed the Bears to run the ball a bit once in a comfortable lead).

Meanwhile, the Patriots will be without their starting QB, Mac Jones(Replaced by Brian Hoyer). This helps alleviate the fact that Packers CB Jaire Alexander is still listed as being questionable.

Any given Sunday always applies, but this is shaping up to be a bit of low hanging fruit for the Packers relative to the rest of their schedule with a bye week still far off. The Packers are currently on a home win hot streak and the 2022 Patriots without their starting QB does not look like the ones to show up and put an end to it. [Coach Matt LaFleur is 23-2 at Lambeau] If the Patriots manage to get their run game going strong AND manage to stop the Packers’ own run at the same time, then they might have a chance. 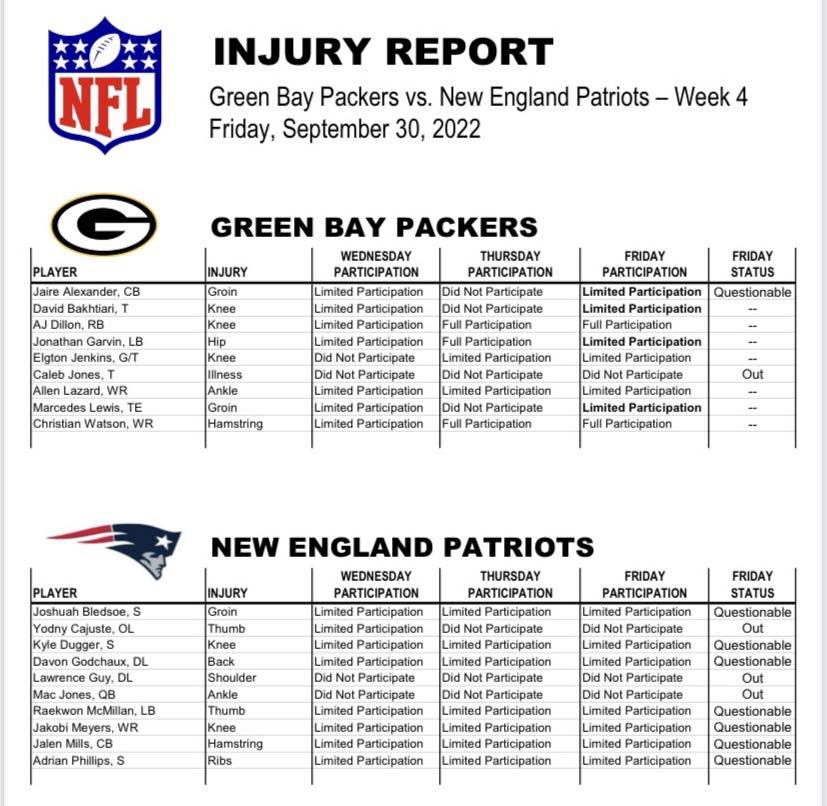 The New England Patriots are the 9.5-point underdogs going into the game. Here is an interesting fact from ESPN on the odds of this game:

If the spread ends up back in double digits, it would be just the fourth regular-season game in coach Bill Belichick’s 23-year tenure in which New England would be projected to lose by 10 or more points. Only the Packers (3 times) have been double-digit underdogs in fewer games since 2000.

Patriots coach Bill Belichick, well-regarded for his knowledge of NFL history, went out of his way to talk about #Packers legend Cecil Isbell in his Wednesday news conference.

Isbell was a senior-committee finalist for the Pro Football Hall of Fame. pic.twitter.com/S1a9t4gYEl