by Jason Parker
in News and Rumors
6

For the second season in a row, the Packers home opener is going to be a primetime banger. Coming off a loss against another NFC Rival, the Minnesota Vikings, Aaron Rodgers and the Packers will be plenty motivated to avoid another disappointment.

Meanwhile, the Bears are coming off a big win against the San Francisco 49ers at home on Soldier Field. They might be willing to take some risks to keep that momentum going against a division rival.

The Packers have not loss two in row under coach Matt LaFleur’s tenure and Lambeau Field is the perfect place to keep that from happening. 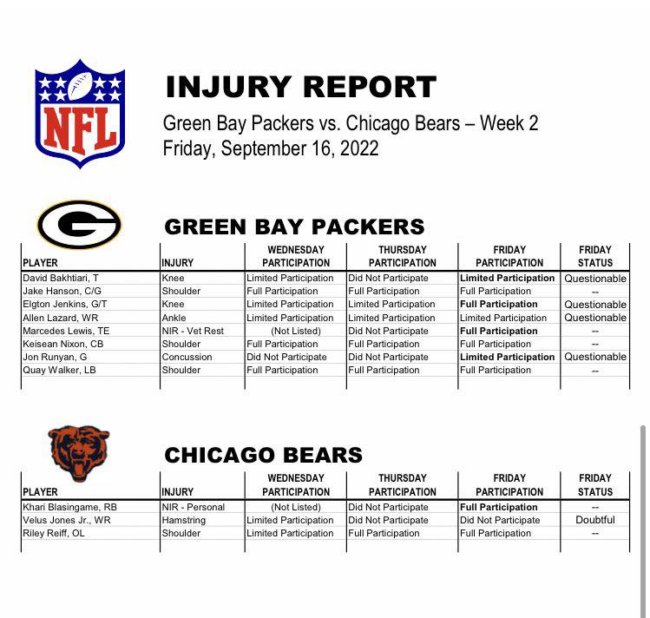 According to Rob Demovsky, all 53 players were active in the earlier half of practice on Friday. This includes David Bakhtiari, Elgton Jenkins, and Allen Lazard. Overall, the injury situation is showing improvement going into week 2.

For the Bears, only WR Velus Jones, Jr. is listed as doubtful.

Adam Schefter reports that WR Allen Lazard should be active:

Packers’ WR Allen Lazard, listed as questionable for Sunday night due to a sprained ankle, is expected to play vs. the Bears, per source.

Lazard on the field with an Aaron Rodgers coming off a loss with something to prove could be a killer combination, especially when playing at Lambeau. Let’s hope the duo still has it this season. Hopefully, we’ll see more of the run game overall this week, but these two will shine once that gets established.

Miscellaneous Packers News for the Week:

Aaron Rodgers was serenaded by Packer fans at a Luke Combs concert:

Can confirm that loud ‘Go Pack Go’ chants have broke out at the Luke Combs concert in Green Bay with #Packers QB Aaron Rodgers in attendance.

Buddy sent this video to me. Between the two Luke Combs concerts and the Packers home opener on SNF vs. the #Bears – Green Bay is lit. pic.twitter.com/xtjc7XKz23

There will be a lot of Packer alumni in attendance for tonight’s game:

RB Patrick Taylor was elevated from the practice squad:

The Packers elevated RB Patrick Taylor from the practice squad for tomorrow night vs. the Bears. So they’ll have three backs up instead of two like last week.

Packers Sputter to Defeat Against Vikings