In 55 years as a Packer fan and a fan of the NFL in general, I had never heard of Hub Arkush. In all fairness, I never read Chicago papers. Never felt the need. I am sure I have at least a few times in my lifetime perused articles offered by Pro Football Weekly. If Arkush wrote the articles I read, I never noticed. Arkush’s job title is Editor and General Manager of Chicago Football and Chicagofootball.com. He says he has been covering Chicago Football for 44 years. He is also the publisher and editor of Pro Football Weekly. Maybe I heard his voice when he was a broadcaster of the Bears radio network from 1987-2004. If I’ve heard him on Westwood one as an NFL sideline reporter or analyst his name never stuck. It’s almost like I spent my entire adult life as an avid NFL fan and Arkush never made a mark, not even a drop in the pond. In my world he was a nobody. Nonexistent.

Today, Arkush is making front page news by calling Aaron Rodgers “the biggest jerk in the league” and “a bad guy”. His comments were a direct personal attack. In the only football related comment he made about Rodgers play on the field he acknowledged that Rodger’s play was sufficient to argue he deserved the MVP award. Arkush’s stated reasons for not voting for Rodgers included Rodger’s off season actions with the team. He claimed that Rodgers held his team and fan base hostage and “ruined” the off-season program. Arkush said Rodgers vaccination status was just, “a log on top of the fire.” He said that it was possible that Rodgers vaccination status could have impacted their season and come down to the Kansas City game. He then acknowledged that it didn’t impact the Packers status as the league’s top team in wins and clinching the conference a game before the season ended, “but it could have” Arkush surmised.

In 55 years as a fan, I have seen players win the MVP award who were later accused of murder and convicted of robbery and sent to prison. (O.J. Simpson) I have seen award winners who have been accused of sexual harassment (Peyton Manning and yes, unfortunately Brett Favre via photograph) One MVP was convicted of child abuse (Adrian Peterson). I never heard Mr. Arkush speak publicly that those trophies should be taken away, but maybe I just wasn’t listening. There has been one MVP accused of deflating footballs on a cold day. That QB destroyed his cell phone before NFL investigators could search it. If we were going to vote for the biggest jerk or bad guys, would Henry Riggs III or Nate Hobbs or one of the players arrested for assault or maybe a player kicked off a team for violating rules beat out Rodgers? Not mentioned by Arkush. 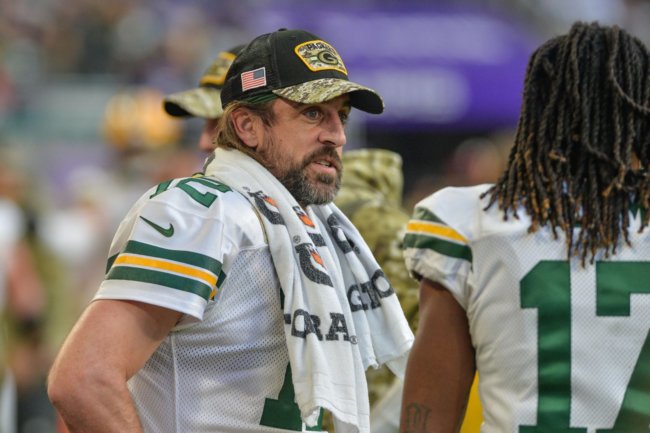 Rodgers seems to be loved by his teammates. If you listen to players like Aaron Jones talk about how Rodgers went out of his way to support him it is hard to fathom Rodgers as a “bad guy.” I wish Arkush had been asked if he voted for Rodgers in the past.

To make up for my lack of education on Arkush I decided to do some research. Look up his past comments. Here was the first one I found on twitter:

“I like the Packers and I hope they are back in the hunt this year, but Ha-Ha Clinton Dix is a more complete safety than Adrian Amos. Just deal with it guys. Telling the truth isn’t a slap at the Packers.”

Before the 2019-2020 season, Arkush doubted the Packers stating Matt LaFleur didn’t have the resume of Matt Nagy, but admitted LaFleur was a well thought of young coach. Arkush thought the real issue was going to be Aaron Rodgers and he didn’t think he would change. Arkush stated the talent on the Bears team would win the division with the Vikings playing a role in the outcome. He also questioned the moves of Brian Gutekunst in free agency, calling them risky and doubted if the Packers could contend, likening their outcome to be the same team as 2018-2019.

So Mr. Arkush has been wrong before, but in all of my research I never saw any report or article where he made such a personal attack. Players trying to leverage their teams is part of the NFL and other pro sport landscape. I don’t condone it from a fan perspective, but it is part of the off season game. Many have piled on Rodgers for his vaccination status or his vaccination “lie”. The conversation doesn’t usually include the only people he lied to were the press. His teammates and coaches knew his status as did the NFL. He did not drop a fake covid card into the hat and he followed protocols around his teammates.

Rodgers’ fight with the front office was not fully revealed and has seemed to have no effect on team chemistry. He has always maintained his love of his team and his coaches. So why is he such a bad guy according to Arkush? Is Arkush nothing more than a Bear homer who hates this Cheesehead QB who openly yells he “owns” the Bears when their fans flip him the bird after a hard fought touchdown? Perhaps. Perhaps he was just wanting his 15 minutes of fame. Hope you enjoy it Hub. It won’t last.

Previous Article
Victory Over Vikings Is the Ideal Launching Pad to the Playoffs
Next Article
Game Day: Green Bay Packers at Detroit Lions