A complete breakdown on Special Teams stole a victory from the defense on a cold and snowy night at Lambeau. The defense deserved this victory. They kept the 49er offense out of the end zone, limiting them to six points. The first 49er field goal could be blamed on the 50 yard kickoff return allowed by the Packers. The difference in the score can be placed squarely on Mason Crosby’s blocked field goal and the blocked punt of Corey Bojorquez. These three plays swung the score in favor of the 49ers.

During the season the Packer Special Teams continually faltered but the Packers still led the NFC in wins. On a chilly night at Lambeau there would be no miracle last second defensive interception, no 4th quarter drive by the offense, there would only be failure. 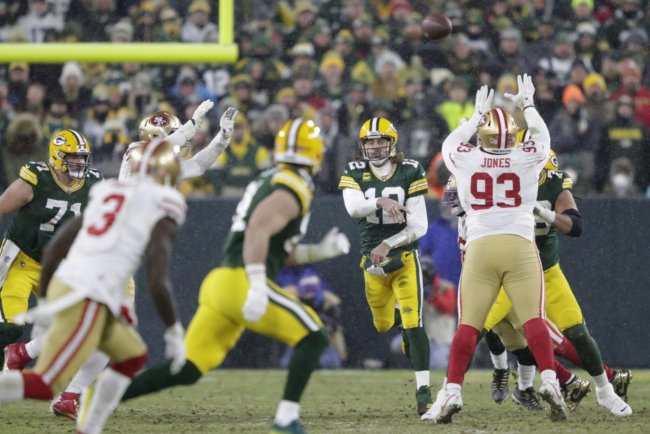 The offense opened up with a quality drive that mixed pass and run ending with a driving burst by A.J. Dillon into the end zone giving the Packers a quick 7-0 lead. The defense walked off the field at halftime forcing four punts and an interception. The defense was not finished coming up with what seemed like a game sealing 4th down stop with 6:14 in the game, preserving a 10-3 lead. But Aaron Rogers and the offense failed to gain a first down and the punt team gave a touchdown and the momentum to San Francisco. With just over four and a half minutes left in the game the offense would again fail to gain a first down. The quick punt after two incomplete passes gave the 49ers time to gain three first downs and 44 yards to allow Robbie Gould to kick a 45 yard field goal as time expired.

This game may go down as the worst failure in Packer playoff history. And it was sadly foreseeable. The Packers think they spend enough time, effort and strategy on Special Teams. They do not. This has been a failure many years in Green Bay. Blame could be pointed in many directions but one point is clear. Their entire approach has failed and needs to be changed.

Previous Article
Game Day: NFC Divisional Playoff – 49ers vs Packers at Lambeau Field
Next Article
Repeated Negative Happenings Can Get in Your Head