It wasn’t Christmas, it wasn’t Boxing Day, but our friends and family from around the NFL were still in the giving mood as the Cousin-less Vikings failed to mount any real resistance to the Packers on a cold Sunday night at Lambeau Field.

The Packer win clinches the NFC for the Green and Gold after Mike McCarthy’s Cowboys also gifted the Packers the opportunity to clinch home field a week before the season ended by allowing the Cardinals to come into AT&T stadium and rock the home team with a critical late season loss.

Aaron Rodgers started the game with some pinpoint passes to Davante Adams for 19 and then 30 yards setting up a 35 yard field goal that Crosby punched through the middle of the uprights despite a slight bumble on the hold attempt by Corey Bojorquez. Crosby had a good night hitting all his extra points and field goal attempts.

The Packer defense feasted on a conservative game plan that seemed to focus on runs to Dalvin Cook and short passes from backup QB Sean Mannion. Mannion did not make a turnover, but that was about as positive a critique as one can deliver. The contrast between Rodgers, who threw two touchdowns for 288 yards and a 114 rating, and Mannion, was clear from Rodgers first pass. Rodgers was dropping passes into tight windows the entire game, while Mannion was missing open targets. 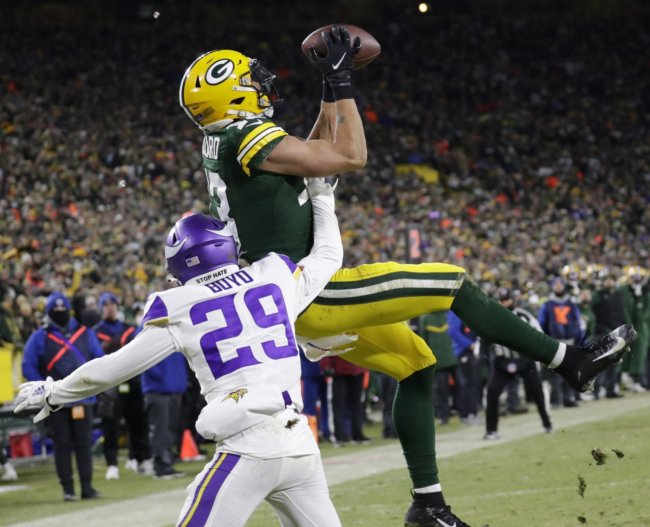 The Packers defense held the Vikings to 27 total rushing yards. The defense ended the night with two sacks but seemed to have pressure on Mannion on almost every pass attempt. Until K.J. Osborn caught a one handed 30 yard sideline pass in the closing minutes, it looked like the Vikings longest play from scrimmage was going to be a fluke catch and run off of a ball that was thrown to Tyler Conklin but was caught by center Garrett Bradbury. Conklin was met by a viscous hit by Adrian Amos as he attempted to catch the pass, which caused the ball to ricochet back ten yards to Bradbury. Bradbury made a great catch as the ball was at his feet and then ran through the surprised Packer defense for 21 yards. 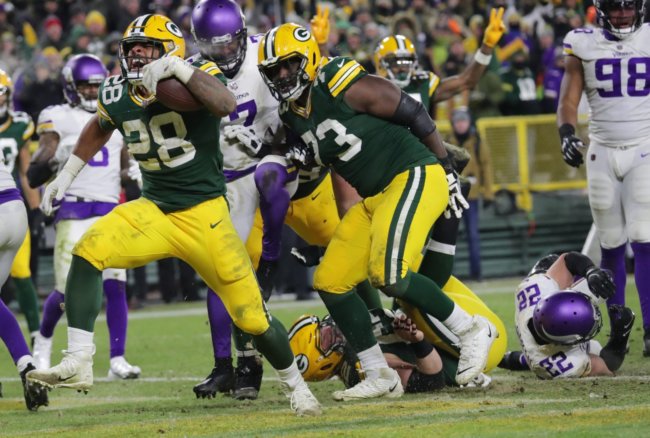 The Packer run game was again split between Aaron Jones and A.J. Dillon. The two runners combined for 189 total yards, including two touchdowns by the bulldozing Dillon. The Vikings official game yardage totaled 206 yards. Needless to say the Packers were dominant on both offense and defense and new Packer punt and kick returner, David Moore, had a 21 yard punt return. Packer fans have good reason to celebrate and watch next week’s game that should surely be quarterbacked by Jordan Love, with curiosity and satisfaction.

Meanwhile, the Tampa Bay Buccaneers have dismissed Antonio Brown after he melted down and left the team in the middle of the game. The Bucs almost lost to the lowly Jets. As a Packer fan, this Sunday was a true holiday of gifts. Let’s enjoy and be sure to write our thank you cards.