De’Vondre Campbell is a guy who, ever since he was a high schooler in Florida, has been working, learning, and improving as a football player. It’s been a long and winding road, but Campbell now has landed where he belongs. With Jaire Alexander and Za”Darius Smith sidelined, I’d say he’s Green Bay’s most valuable defensive player so far this season.

De’Vondre was no five-star recruit. His first college ball was played out in Jordy country, at Hutchinson (Kansas) Community College. He got enough notice as a Blue Dragon to go on to play at the University of Minnesota from 2013 through 2015. While there, he improved his tackle totals from 39 to 75 to 92. He showed himself to be an all-purpose defender, adept at tackling, blitzing, forcing turnovers, and playing tight pass defense.

The Falcons liked what they saw and drafted him in the fourth round in 2016. He proceeded to start at outside linebacker in his first game as a pro. Though injuries limited to him playing in only 11 games that season, he stayed healthy all of 2017, and his stats shot up to 92 tackles, four pass deflections, and two sacks. The victim of his first sack as a pro happened to be Aaron Rodgers. It appeared that Campbell was on his way to secure employment, if not stardom.

De’Vondre finished out his four-year rookie contract with the Falcons, getting better each season: in 1918 he recorded 88 tackles (according to nfl.com) and that number then soared to 122 in 2019.

Following that great season, as a free agent in April of 2020, he pocketed good money by signing on with the Arizona Cardinals, for $6 million for one year. Though he started all 16 games in 2020 for the Cards, and recorded 91 tackles, the Caards let him go, and he still was not a highly sought-after free agent in 2021.

The Packers didn’t pick him up until June, when GM Gutekunst obtained him at the bargain rate of $2M for the year. It’s been said that he passed up offers of more money to play for the Packers. Rob Demovsky recently described the situation this way:

“His previous team, the Arizona Cardinals, had loaded up on young, high-draft pick players at his position – Isaiah Simmons (No. 8 overall pick in 2020) and Zaven Collins (No. 16 in the 2021 draft). If the Cardinals didn’t land Collins in the first round, they may have taken another look at Campbell.”

Campbell has started every game since for the Packers, including last Thursday’s big win. His stats stand at: 76 tackles, 3 TFLs, 2 QB hits, 3 passes defended 2 forced fumbles, a fumble recovery, a sack, and 2 interceptions. Seven of those tackles were recorded by Campbell Thursday night – against his former team – along with a sack and two tackles for loss. Campbell was on the field for every defensive snap against the Cards.

Projected over a 17-game season, Campbell would be in store for accumulating 161.5 tackles. He currently ranks fifth in the league in tackles. There’s already talk of him being named a Pro Bowler or even All-Pro at season’s end.

Campbell has all the physical equipment needed to be a formidable inside linebacker. He’s 6’4” and weighs 232 pounds, which strikes me as a perfect size for the job – though the prototype for ILBs for the past decade has been the Seahawks’ Bobby Wagner, who at 6’ and 241 pounds posted a 4.46 dash time in 2012. Campbell’s speed (4.58 dash time) is fast enough to allow him to make plays all over the field. The Packers alternate at lining him up next to Kris Barnes at inside linebacker, or letting him be the sole ILB, similar to how Blake Martinez was employed for all those years.

He’s probably the most adept pass defender the Packers have had as a linebacker in more than a decade. And while on that subject, when have the Packers ever had so many pass break-upping players? Besides Campbell, there’s the incomparable Jaire Alexander, Eric Stokes, Adrian Amos, Darnell Savage, and Chandon Sullivan. This is a scrappy group of ball hawks.

Since pundit Aaron Nagler has been critical of those who are all-negative concerning Kevin King, I’ll provisionally add his name to the above list. It seems that when KK can play without worrying about whether his quarry will go deep, he clings closely to his man. He has recently shown some ability to provide good coverage when playing slot CB – but so has Sullivan.

As to other attributes, Campbell is a sure tackler, and one who has no trouble putting running backs of his own size on the ground. He also wears the helmet with the headset that relays the defensive play calls from the sidelines. Because of his long dreadlocks, it’s easy for fans to spot him as he covers a lot of real estate on the field.

Going into this season, I was concerned that the Packers had failed to plug a gap they’ve had for years in their defense at ILB. To the surprise and relief of a great many fans, GM Gutekunst took to the streets and enticed De’Vondre to come and help Green Bay go all the way this season. If it happens, Campbell will be in line for a heaping amount of the credit.

It’s been an uphill but steady journey for De’Vondre, but at 28 years of age he has seemingly found his niche in the NFL: smack in the middle of the underrated Green Bay defensive alignment.

This brings us back to the rhetorical question that Aaron Rodgers shouted out during the Bengals’ game: “How in the hell was this guy [Campbell] on the street?”

Rob Demovsky provides us with part of the answer, as he has described the situation this way:

“His previous team, the Arizona Cardinals, had loaded up on young, high-draft pick players at his position – Isaiah Simmons (No. 8 overall pick in 2020) and Zaven Collins (No. 16 in the 2021 draft). If the Cardinals didn’t land Collins in the first round, they may have taken another look at Campbell.”

These are very high draft choices, and ones not normally spent on inside linebackers, who are generally considered to be of much less value than QBs, edge rushers, cornerbacks, and the like.

In his season and a half with the Cards, and playing in every game, Isaiah Simmons has recorded 107 tackles, 4 TFLs, 4 QB hits, 2 INT’s, and six passes defended. Arizona rookie Zaven Collins has played in all eight of the Cards’ games this season, and started in five of them. His stats, however, are meager: 17 tackles, 1 TFL, and 2 PDs. De’Vondre’s numbers by the end of this season will likely surpass those of both of Arizona’s two spendy ILBs combined.

In the meet-up with Green Bay, Simmons did have six tackles and 1 PD, but was otherwise not a factor. Collins, who has handled just 32 percent of the defensive snaps on the year, was on the field for only three plays against the Packers.

As to which general manager is the better talent evaluator, it appears to be Gutekunst in a rout over Cards’ GM Steve Keim (and for that matter Thomas Dimitroff, the Falcons GM from 2008-20). Keim has been the Cards’ GM since 2013. Had the Cards not let Campbell get away at the end of his 2020 contract, they likely would have emerged the winner a week ago. Score one for Gutey, as well as for Campbell. 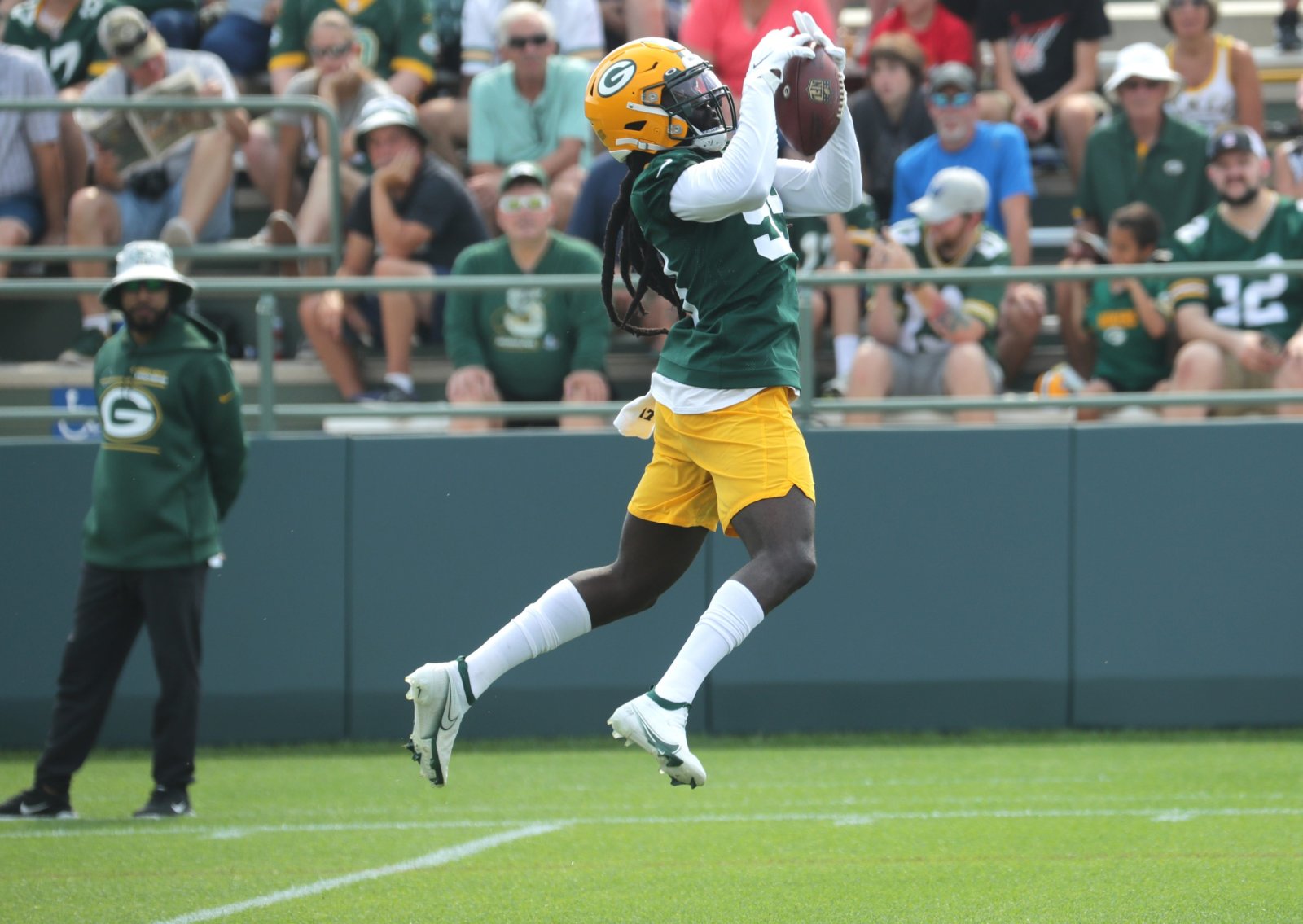