Wooooo boy, on the west coast this week and the time zone change, in addition to daylight savings(fuck that btw), I got all screwed up and I’m late making this post. Nothing at all to do with the legal dispensaries here. No, sir. I’m just researching.

Anyways, so how ’bout them Packers? Amirite? Nothing exciting around these parts except for fucking everything. I’ll spare the Kaaron Rodgers drama in this post, but expect more on that in the future.

We’re not going to get the great (read: hyped) Mahomes vs Rodgers matchup, but I know everyone around the league has eyes on Love and the rest of the team today. LaFleur has honestly done a fantastic job staying out of the recent drama and not letting it be a distraction. That’s a quality of a great leader and that’s certainly what the Packers have in him.

Either way, the Chiefs are 4-4 going into this game and the Packers were the odds favorite before a certain virus infected a certain soccer mom.

The Chiefs lead the all-time series between the teams with 7-4-1. The Packers have won three of the last four games in the series since 2007.

(this heading makes no sense, but I really wanted to use it)

The Packers have won six games without Rodgers starting and Love faces an uphill battle with current injuries and the fact that it’s going to be played in a hostile environment.

With the bad luck mounting, the Packers learned just last week that they lost TE Robert Tonyan to a torn ACL. Also, RB/KR Kylin Hill will not be returning this season. In addition to that, the team did not activate LT David Bakhtiari this week(it’s still possible he will be activated from the PUP list next week – they have until November 10th). Do not worry though, WR Davate Adams will be active.

Fun fact: Both Jordan Love and coach Matt LaFleur celebrated their birthdays this week. Love on the 3rd and LaFleur on the 2nd. 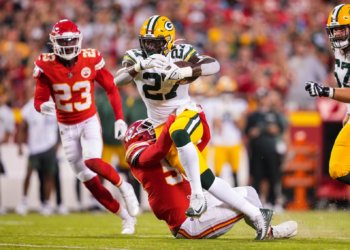