After reviewing tape of the Packers flop in Jacksonville, ten plays stand out as critical failures. 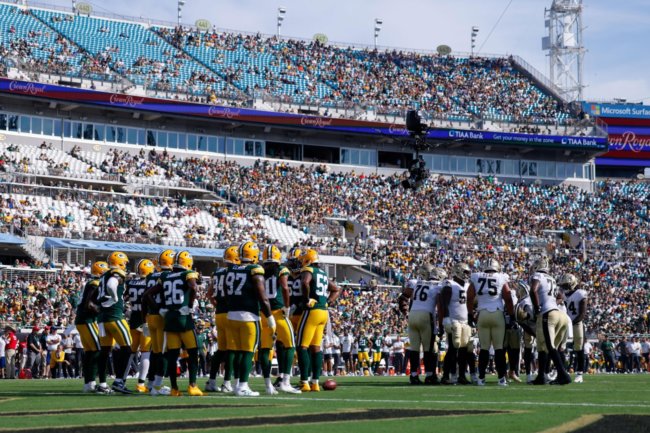 Play 2; second and nine from the NO 26. Result: 14 yard completion to the NO 40 yard line. The Saints threw to the slot receiver who ran a square in across the field. The Packers seem to be in zone coverage that is very soft. Sullivan lines up 7 yards off the line of scrimmage and back peddles to ten yards. He seems to know the receiver’s route and communicates to his left following the receiver all across the field but never gets closer than two yards to Callaway, the Saint’s receiver on the play. Callaway crosses behind LB Krys Barnes who has his eyes locked on the Saints QB Winston. Barnes lets Callaway run past him and Sullivan seems to trail at a distance. No other Packer defender recognizes Callaway’s route or attempts to close on him. Callaway is wide open when he catches the ball and is finally tackled by Alexander. Also open on the play was RB Alvin Kamara in the right flat. A third Saint receiver, Deonte Harris does a 15 yard square in that turns DB Kevin King around leaving him wide open on the top half of the field. This play combines all of the Packer defensive problems against the pass in week one. Linebackers and DB’s not working together. Soft coverage, and a failure to anticipate and then drive on route breaks.

Play 3; first and ten at the 40 yard line. Result: 11 yard scramble by Winston for a first down. Winston’s scrambles were a recurring unresolved problem for the Packers. On this play Rashan Gary lost contain allowing Winston outside the tackle. On the next scramble of that drive Kenny Clark whiffed on a sack and Winston made the Packers pay to the tune of a 16 yard run. The scrambles were in part gap integrity and QB awareness by the D-line and part lack of an effective plan by the Packers to shadow or contain Winston. This containment failure by OLB’s reappears on a number of run and pass/scramble plays.

Third and seven from the GB 28. Result: Six yard pass completion to Aaron Jones. This play had Jones open in the middle of the field but Rodgers waited to release the ball. By the time the catch was completed Jones momentum put him into the sideline. This hesitancy by Rodgers to take the underneath option reoccurred on later plays.

Second and seven at the NO 27. Result: gain of six setting up third and one. On this play De’Vondre Campbell is the single LB and at the snap he vacates the middle of the field shadowing Alvin Kamara, apparently playing pass, leaving a huge open space for RB Justin Hardee. Campbell doesn’t even seem to be looking at the QB or the exchange when it occurs and is too late to recover to make a play. Luckily, Adrian Amos trips him up to save a big play.

First and ten at NO 46. Result: Seventeen yard completion to Harris for a first down. Again Kevin King is turned around and has no closing burst on the ball. This play set up the long TD against King later in the game. The Packers either have to bring King off of speedy receivers or give him safety cover help. This coverage weakness was exposed by Tampa last year and will be a recurring theme until the Packers find a winning countermove.

First and ten at the GB 37. Result; Sack for minus 11 yards. This play seemed to scheme leaving DE Marcus Davenport unblocked. That required Rodgers to outmaneuver Davenport to make a throw. Rodgers is at the age/stage of his career where failure to execute could be career ending. This was not a failure of the o-line. It was a failure of game plan and execution. The Packers had just had back to back positive run plays by A.J. Dillon for a first down. After this sack Dillon seemed to disappear. The Packers might be better off starting Dillon to soften a defense up and then unleash Jones’s quickness. The run sets up the pass but play action needs a blocking scheme that does not allow free runs on your QB.

Fourth and seven at the GB 41. Result; screen pass completion to Johnson for 12 yards. This back breaker play was a lack of awareness/diagnosis by Gary, L. Smith who lined up inside Gary, and LB Campbell. Nobody anticipated the TE screen. Smith made no impact or pressure on this play. His only plays of notice was a play he lost contain on a run and the penalty for roughing the passer. Gary is athletic but lacks awareness at times. He must also improve his closing burst on the QB.

Packers first drive of second half

Second and seven at the NO 9. Result: interception. Rookie Royce Newman picked a bad time for his worst play of the game. He whiffed, allowing Cameron Jordan a free shot at Rodgers. Rodgers hurried a short toss off target. Adams had a step but it would have been a minimal gain.

Third and eight on the GB 8. Result: interception. The pass was so far away from MVS that it seems Rodgers was throwing it away. If he was, it made no sense to throw it in bounds. If he was trying to hit MVS there was a serious miscue by one or both. Poor play selection and execution.

Second and ten at the NO 45. Result; 55 yard TD pass. The hard part of comprehending this play is the failure of the Packers to adjust. Until they do, every team will scheme their speedy receiver to King’s side.

The Packers have ways to right this ship. Can they up their game against Detroit? Monday night is coming fast. Let’s hope this team learns quickly.

Previous Article
Packers Melt Under Saint’s Heat
Next Article
The Bigger They Are, the Harder They Fall