Head coaches and quarterbacks ultimately take the blame for an NFL loss. Unfortunately, Sunday’s Packer starters had a laundry list of volunteers for some of the blame. Coach LaFleur rested his starters for most of the preseason. The Packers had a new defensive coordinator so preseason play by starters to iron out assignments would seem logical. The defense started the game giving up two fifteen play touchdown drives. The defense was beaten on almost every rep of the first half. It was historically bad. Five TD’s by Winston. No sacks. The Saints totaled 171 yards rushing averaging 4.4 yards a carry with a long run of 14 yards by a running back. Just a steady diet of moving the chains. Winston also rushed for 62 yards The Pack defense totaled four pressures while picking up a penalty for roughing the QB on 4th down.. Green Bay’s defense had no answer. The also had no plan B. LeFleur described the defense as nonexistent in the first half. An accurate summary. The Saints offensive line was dominant, putting aside all of the hurricane distractions and taking it to the Packers. 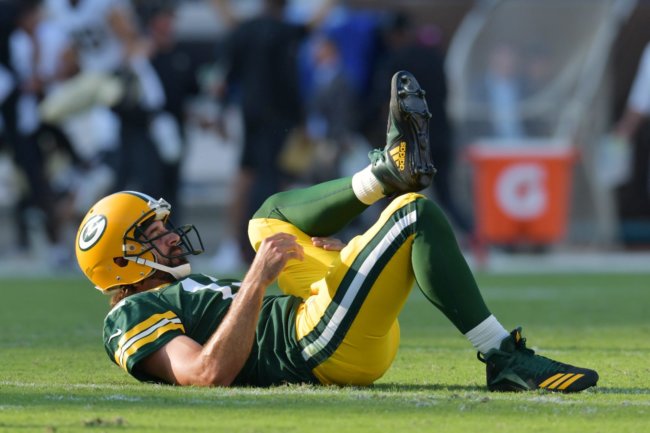 Green Bay Packers quarterback Aaron Rodgers (12) on the turf after throwing a pass that was intercepted by New Orleans Saints cornerback Paulson Adebo (29) during early third quarter action. The New Orleans Saints hosted the the Green Bay Packers at TIAA Bank Field in Jacksonville, FL Sunday, September 12, 2021 after the Saint’s home game had to be move from New Orleans after Hurricane Ida hit the Louisiana coast. The Saints went into the half with a 17 to 3 lead over the Packers and walked away with a 38 to 3 win in their season opening home game away from home.

The Packer vaunted offense? What offense. The offensive line could not sustain blocks. Nor could they keep pressure off Rogers. Rogers seemed befuddled, unable to find open options and too slow to run away from pressure. With Saints breaking free he looked like Jordan Love’s failed attempts under pressure in the preseason. The interceptions rank as two of the poorest decisions of his storied career.

Other failures on this humid Sunday? The short list includes:

Dean Lowry getting beaten physically on many plays and then making a critical 4th down mental error penalty.

Did anyone see Randall Cobb get open on any play before garbage time?

L. Smith flattening Winston after the ball was out. Packer fans can scream all they want, but he could have let up, not thrown him to the ground, and kept the zebras from taking their opportunity.

Gutekunst for not addressing the D line early last year or early in this year’s draft. Add on a failed approach at linebacker.

LeFleur for a failed game plan, picking Joe Barry, resting all the starters and being out-coached by Sean Payton and staff in every phase of the game. Counting the NFC championship Lefleur has now been out-coached in his last two games. He fired his defensive coordinator after the last loss. Sunday’s debacle seems infinitely worse as far as game plan and execution. The defense looked lost. The Saints defense seemed to know the Packer plays so well one would think they were in the Packer’s huddle.

Last but certainly not least, Aaron Rodgers for a putrid performance.

Ironically, the Packers are tied for the North Division league. There are 15 more games on the schedule and nowhere to go but up. Time for Plan B, please. Next up, Detroit.

Previous Article
Sliding Further to a Bitter End: No Super Bowl Title This Year
Next Article
Ten Critical Plays vs. the Saints