After a surprising blowout loss to the Saints in week one, the Packers bounced back against the Detroit Lions at home last week, winning by a comfortable score of 35-17. Getting some confidence back, the Packers took their game to the west coast for a Sunday Night Football contest against the 49ers, who were coming off a 17-11 win in Philadelphia.

The Packers took the drive 39 yards on eight plays to set up a 54-yard field goal by Mason Crosby. After stopping the 49ers on their opening possession, the Packers marched 80 yards on seven plays, resulting in a one-yard touchdown from Aaron Rodgers to Davante Adams. The Packers led after one, 10-0.

Green Bay continued their dominance late the second quarter, steamrolling 86 yards on 9 plays. The end result was another touchdown, this time on a 3-yard run by Aaron Jones. San Francisco got on the board right at the half, going for it on 4th and goal from the one. Rookie quarterback Trey Lance entered for one play and scored on a run around the end. The Packers led at the half, 17-7.

The 49ers got right back into the game on the opening possession of the second half. With a solid mixture of run and pass, the 49ers marched 83 yards on 13 plays, ending with an 8-yard touchdown pass from Jimmy Garoppolo to Brandon Aiyuk. The Packers offense stalled on their next possession and the third quarter ended with the Packers up, 17-14. 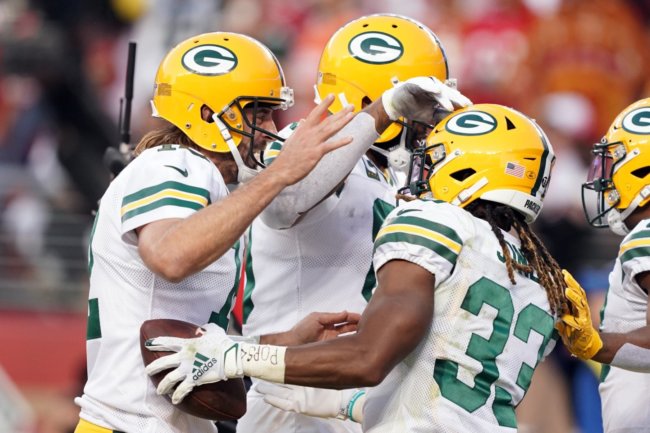 The Packers extended their lead to 10 after an 86-yard drive on 10 plays. Aaron Rodgers found Marquez Valdes-Scantling from 12 yards out. For Rodgers it was his second touchdown pass of the game. The offenses dominated in the last 15 minutes as the 49ers scampered down the field 81 yards in 5:39 to cut the lead to three after a one-yard run by Trey Sermon.

A Mason Crosby field goal from 38 yards out put the Packers up, 27-21 with 2:39 to play. With all three timeouts left, Garoppolo led the 49ers on a scoring drive of 75 yards, ending in a touchdown pass to tight end Kyle Juszczyk. The 49ers went back on top, 28-27.

With just 37 seconds left to play and no time outs, the task seemed nearly impossible, even with Rodgers at the helm. But passes of 25 and 17 yards down the middle of the field to Davante Adams set up Crosby for the game-winner from 51 yards out. The Packers prevailed in a wild one, 30-28.

Rodgers threw for 261 yards and two touchdowns. Davante Adams caught a game-high 12 passes for 132 yards and Aaron Jones 82 rushing yards on 19 carries. Defensively, the Packers had three sacks and an interception.

The Packers head to the road to face the Steelers on October 3 at 4:25 PM Eastern Time.