Rashan Gary Expected to Stand Out in 2021

Obviously, every player approaches the upcoming season with the intention of it being their best, but there are certain players that stand out as not only needing a better season, but it’s also obvious they have plenty of untapped protentional. Rash Gary is worth mentioning in this regard. The odds of him continuing to show improvement are high and it’s a safe bet with a Betfred bonus that he knows this is his biggest season yet.

Rashan Gary is now entering his third season with the Green Bay Packers. A standout at Paramus Catholic High School in New Jersey, Gary was the number 1 recruit in the class of 2016. As a sophomore at Michigan, Gary appeared in every game and has his best performance against UCF on September 10, recording six tackles. He had 58 tackles as a sophomore and was named to the All-Big Ten defensive first-team.

Before the 2018 season, Gary was a preseason All-American. He registered 38 tackles, including 6.5 sacks during the season, despite being hampered with a shoulder injury. Gary was named to the All-Big Ten defensive first-team Following the season, Gary announced he would not return for his senior season.

Entering the 2019 NFL Draft, Gary was selected by the Packers with the 12th pick overall. Mainly a defensive end on college, Gary would play outside linebacker for the Packers. Having to overcome a torn labrum in his right shoulder during the summer before his first NFL season, Gary recovered to registered his first sack in week three. The highlight of Gary’s rookie season was a three-tackle and sack performance against the Bears. He appeared in all 16 games, recording 21 tackles and two sacks. Gary added two tackles in two postseason games. 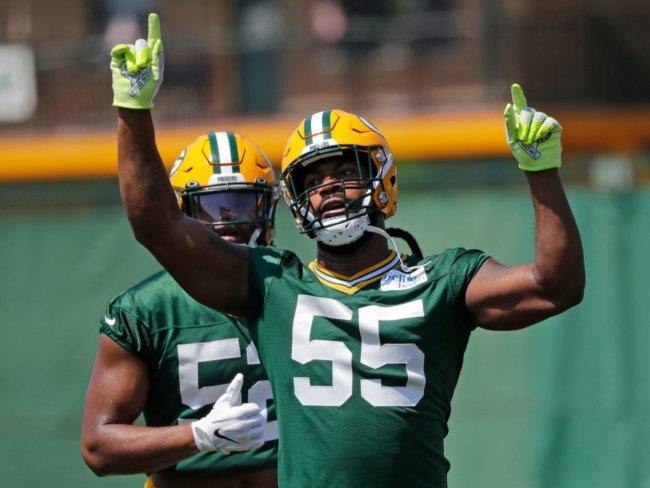 It didn’t take long for Gary to show he was improved over his rookie season. In week two of the 2020 season, Gary took down Lions quarterback Matthew Stafford 1.5 times in a blowout win. Gary more than doubled his season sack total to five and registered 34 tackles. Gary made his presence felt in the playoffs as well, recording five tackles in two games, including 1.5 sacks against the Rams’ Jared Goff.

Despite the improvement, the Packers have announced during training camp this season that Gary will be on the second team behind Preston Smith. A six-year NFL veteran, Smith had a career high 12 sacks in his first season with the Packers in 2019 and 42 tackles and four sacks last season. His willingness to take a pay cut to stay on the team may continue to interfere with Gary’s potential playtime going into the future.

Smith did have some good things to say on Gary recently:

I can tell you one thing: from the day Rashan has gotten here, you talk about a guy that puts everything into whatever it is he’s doing. He’s going to bring tremendous energy and tremendous effort on every play, and it’s shown. I really think probably as much as everybody in two years on the defensive side of the ball, you see it paying off for him. He’s going to be a big-time player for us and I think he’s going to be a big-time player in this league for a really long time, and it all starts with that work ethic and the detail. Rashan’s working hard to develop multiple moves coming off the edge, but one thing that definitely jumps, we see it every practice and every game, is just the effort he plays with.