The Shanahan Offense Is in Place in Green Bay

Well, Packer fans, that era is over in Green Bay. With the hiring of Matt LaFleur in 2019, the transition to a new offensive philosophy began. While the transition was not greatly noticed in Matt’s first year, it progressed in 2020 to the point that Green Bay became the NFL’s highest scoring team. The 2021 season, however, will mark the first time that the new offense will be fully installed and operating. Personnel-wise, 2021 might be an uncertain time, but scheme-wise it’s a time of immense promise and potential. Embrace it!

The new offense is often called a wide zone offense. It’s actually been around for a while, and it’s continually undergoing change and refinement. Mike Shanahan, a primary architect of the scheme, took it to its peak in 1997 and 1998, when the Broncos dethroned Green Bay as Super Bowl champ in the Super Bowl game played in 1998, and when the Broncs again reigned supreme in the game played in 1999 (Super Bowl XXXIII).

Though QB John Elway was named the MVP in that second Super Bowl victory, it was Terrell Davis who was the MVP in the first game. Davis was the dominant force for this offense in both years. In seven post-season games in those two years, he rushed for 1,149 yards, averaging over six yards per carry, and an absurd 164 yards rushing per contest over those seven playoff games. While the West Coast offense relies on lots of short passes, the foundation of the Shanahan offense is a run-heavy strategy.

After being named San Francisco’s head coach in 2017, Kyle Shanihan followed in his father’s footsteps by rapidly transforming an ordinary-looking roster into an offensive juggernaut. After going 6-10 and 4-12 in his first two years as the 49ers’ coach, in 2019 he took his team straight to the Super Bowl. He put in place many of his father’s schemes and beliefs. He turned four unacclaimed running backs and an average-performing quarterback (Jimmy Garoppolo) into (temporary) superstars. That lineup pummeled the Packers in the playoffs – only to be beaten by the Chiefs, 31 to 20, in the ensuing Super Bowl.

Last year Jimmy G only went 3-3 on the season and he was actually benched for a time in favor of C.J. Beathard. By early November Garoppolo went on injured reserve, and then in April the Niners traded up to get the third overall draft pick – and used it to draft Garoppolo’s likely replacement, North Dakota State’s Trey Lance. Last year Shanahan and the Niners were decimated by injuries – it will be interesting to see if they can get that dynamic offense back on track with a healthier roster.

The same can be said of the Rams. The wide zone offense again rose to the forefront, in, L.A., from 2017 through 2020, when boy genius and Shanahan disciple Sean McVay led the Rams into the playoffs three of the last four years. In 2018, McVay’s team made it to the Super Bowl, but his offense failed him in a Super Bowl loss, 13 to 3, to the Patriots.

Currently, I believe that one-fourth of NFL teams have adopted. Or are trying to, Shanahan’s offensive concepts.

As stated earlier, in LaFleur’s first year as head coach, Green Bay’s offense wasn’t very different than all of those Mike McCarthy teams. In 2020, however, LaFleur’s guys began to resemble what Mike Shanahan envisioned. There was more emphasis on the run game, more play action, more misdirection, and more game plan options. 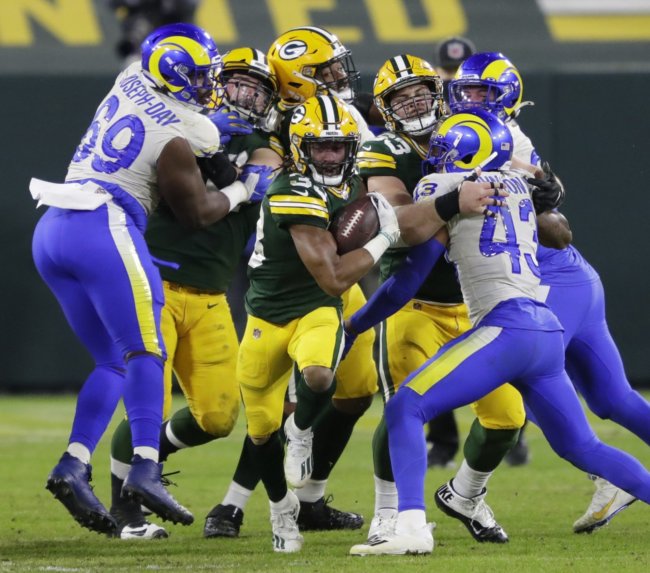 Green Bay Packers running back Aaron Jones (33) breaks away for a huge run in the third quarter against the Los Angeles Rams during their NFL divisional playoff game Saturday, January 16, 2021, at Lambeau Field in Green Bay, Wis.

Despite the Pack’s salary cap distress, in March they re-signed Aaron Jones. The year before, in the second round they got a versatile and powerful accompaniment to Jones in A.J. Dillon – who could well be the game’s next dominant rusher – along the lines of the Titan’s Derrick Henry. These two personnel moves were surely made with the shift to a run-dominant offensive scheme in mind.

The Packers are also stacked with promising run blockers: David Bakhtiari, Billy Turner, and Elgton Jenkins are top-notch, and second-round pick Josh Myers, out of Ohio State, is already penciled in as the starting center. A host of other up-and-coming guys are also in the mix for playing time, including Lucan Patrick, Jon Runyan, Yosh Nijman, Simon Stepaniak, Royce Newman (4th-rounder), and Ben Braden. Green Bay has extraordinary depth in its O-line. Furthermore, in his very first year as head coach, La Fleur immediately switched his O-line over to the zone blocking approach, which is a key component of the wide zone attack.

The makeup of the roster been tailor-made for the Shanahan offense in other ways as well. The Pack has a stable of tight ends who are willing and adept run and pass blockers. There’s Big Bob Tonyan, scond-round pick Josiah Deguara, third-rounder Jace Sternberger, Dominique Dafney and blocker extraordinaire Marcedes Lewis.

Apparently by design, the Packers have also gone all-in for large receivers, and nearly every one of them is a fine run blocker; the list includes Allen Lazard, Marquez Valdes-Scantling, Devin Funchess, Juwann Winfree, and Equanimeous St. Brown, all of whom are at least 6’3” and 214 pounds.

Which brings us to the gadget guy. Going back at least four years, the Packers have failed to find a player who excels at running jet sweeps, doing reverses, grabbing screen passes, getting open as a slot receiver, and being a skilled yards-after-catch guy – key components in the team’s new offense. In absolutely stealing Amari Rodgers in the third round of the draft, Green Bay might have finally found the man they’ve been looking for.

Amari enters the pros with four solid years of top-flight college experience at powerhouse Clemson, culminating in being the 2020 college leader in receptions, second in passing yardage, and third in touchdowns. He’s extremely quick and can stop on a dime. Though only 5’10”, he’s a sturdy 212 pounds. Amari is NFL-ready right now. One might even argue that Clemson QB Trevor Lawrence would not have been chosen with the first pick in the draft without Amari’s help.

If Rodgers lives up to the hopes the Pack has for him, he’ll turn out to be GM Gutekunst’s best draft selection to date.

There’s one final player who should be mentioned as being a strong fit in the Shanahan offense: QB Jordan Love. The Packers obviously saw the qualities they were looking for in a QB to one day run the offense that the team has spent three years implementing.

Instead of worrying over the next five weeks over whose going to be under center for Green Bay in September, how about anticipating just how good the Pack’s offense will be executing Shanahan’s schemes – and with all of the above pieces in place?

The Packers selected Matt LaFleur because they (correctly) felt he was the best person to make the switch from a West Coast to the wide (or inside) zone offense. So far, their entrusting LaFleur with this mission is off to a rip-roaring start. The upcoming season, however, should be when Green Bay’s new offensive scheme comes into full and glorious bloom. Go Pack Go!

Previous Article
Revisiting the Packers’ Drafting of Jordan Love in April of 2020
Next Article
With Rodgers Absent From Camp, All Eyes on Jordan Love