by Rob Born
in Articles & Analysis
64

On June 2 on this site, I seconded the notion that Packer Nation was indeed “approaching ‘the precipice’ of [the Rodgers] drama. I advised readers to “Mark down June 8 on your calendar.”

June 8 was the beginning of the recently concluded three-session mini-camp. Aaron Rodgers was a no-show at this important and mandatory gathering. To me, Rodgers’ absence was a tipping point in this saga, and perhaps it signals whether Rodgers has any future at all with our team.

Why? Because Aaron Rodgers’ holdout is doing real and irreparable damage to the Green Bay Packers – right now – in terms of lost practice opportunities with young or inexperienced teammates. He’s also damaging the team in other ways, such as creating distractions, dividing the fan base, and hindering planning – for we don’t know who will be the starting quarterback three months from now. But for now, let’s confine ourselves to the effects Rodgers is having on team training.

The Value of Practice

First though, let’s talk about training, or “practice” as Allen Iverson famously dismissed it. There’s always a contingent out there that minimizes the notion of training. They point out that these guys have been playing the game since they were ten years old or younger, they are professionals, or they add that the Packers presently have mostly veterans manning the key positions. Alongside this group are the media guys who discount any training that goes on without helmet and pads. They insist that we can’t know anything about this team or its players until they play in real games against real opponents.

I’ll grant you that in bygone days the NFL might have over-emphasized the need for extensive preseason practice. In the 1960s team played four or five preseason games each year. In the 1970s, the league season was upped to 14 regular season games and six preseason games. Now, we’re all the way back down to just three preseason, or “exhibition” games.

One big reason that training camps have become ever-increasingly important is the fear of injuries – many of the starters and key players see little or no action during preseason games. Another reason is that every time a new collective bargaining act is reached between the players’ union and the teams, we wind up with fewer, shorter, and lesser-contact practices. It’s hard to even imagine anymore teams having two-a-day heavy contact drills for weeks prior to the regular season.

The advent of fewer preseason games and minimal contact prior to the regular season renders the kind of training that took place at the mini-camp extremely important. Yes, some OTAs (organized team activities) are mostly exercise classes designed to get players in shape, but even those activities also serve the purpose of getting players to form cohesive and bonded units of individuals

The three days of practice that Rodgers just missed were true “team” drills. This wasn’t just about coaches interacting one on one with players. These practices featured 7-on-7 drills, full 11-on-11 drills with offensive and defensive units matched up against each other, and the ever-popular 2-minute drills.

While Aaron Rodgers might personally be able to prepare himself individually for a season of football, he can’t get the familiarity he needs to have with his receiving corps without such practices.

Even at this stage in the season, new formations and plays are being learned – both on defense and offense. In the case of Rodgers, he and veteran Davante Adams won’t need weeks of training to get on the same page, even if new plays and wrinkles are introduced. But what about the rest – and especially those players who are new to the NFL or to the Packers playbook?

Rookie Amari Rodgers is not only likely to get a bunch of snaps as a rookie, but his versatility figures to be a key component to the team’s success. Perhaps no other Green Bay player will suffer as much from the Rodgers’ holdout as this exciting rookie.

Devin Funchess is a veteran who’s with a new team and quarterback. In failing to return to the team, Rodgers is irreparably harming Devin’s chances of achieving success here.

Allen Lazard, who was only thrown to 46 times last season would also surely benefit from spending more time practicing with Rodgers.

Tight end Robert Tonyan was thrown to just 59 times last season – some are projecting that his targets could, and should, double in the upcoming season. Also expected to see considerable playing time is Josiah Deguara, who missed almost his entire rookie season with an ACL injury. These two young guys need lots of practice time with the team’s starting QB if they are to be assets to the organization.

Two other big-bodied promising young receivers who would benefit from as much practice time as possible with Rodgers are Malik Taylor and TE Dominique Daffney.

Another key to the Packers hopes in 2021 is A.J. Dillon, who had fewer than 50 total rushes and receptions in his rookie campaign. We’re also likely to see a third running back get some substantial action sometime during the regular season. This could be Patrick Taylor, Dexter Williams, or rookie Kylin Hill – all of whom have little or no NFL experience.

Then there’s Marquez Valdes-Scantling. Here’s a guy who led the NFL in yards per catch a year ago. We talk about his drops, which Fox Sports says numbered seven last year (after three each in his first two years), and about his poor completion percentage of 52% (33 of 63). I’ll bet, however, that he and Rodgers failed to connect on deep balls last season at least a half dozen times in which MVS got very open deep. Though MVS might be the most dangerous deep threat in the league, he and Rodgers were not in synch last season on way too many potential game-changing bombs. Practice is the cure for that deficiency.

And how about WR Juwann Winfree, who got open and hauled in several catches from QBs not named Rodgers during the mini-camp? Here’s a former Denver wideout who quietly spent a fair amount of time in 2020 on the Packers’ roster. He too needs all the time he can get with Rodgers.

Aaron will no longer be taking snaps from Corey Linsley. The Pack’s new starting center might well be a rookie, the Buckeyes’ Josh Meyers. There could also be two or three additional inexperienced offensive linemen who will be getting some offensive snaps. They’ll need to get used to their quarterback’s cadence (Rodgers’ is unique); otherwise, instead of getting a bunch of “free plays,” it will be the Packers who go off-sides, rather than the defense.

Along with Myers, other inexperienced O-line players who are in line to get some reps include Jon Runyon, Yosh Nijman, and Simon Stepaniak; in fact, besides Myers, rookies Royce Newman or even Cole Van Lanen might earn some playing time at some point during the season. They’ll also need to spend time working with the starting QB if they are to perform well.

Then there’s the matter of all of the jet sweeps, reverses, slot receiver patterns and the like that Green Bay has talked about since the arrival of Coach LaFleur, but which they’ve yet to install in any meaningful way. These plays call for split-second timing, which requires lots of practice (between the QB, receivers, and running backs). 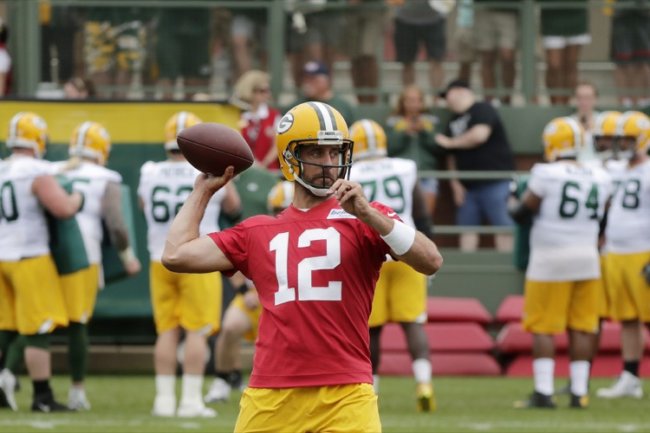 Almost everyone is saying that if Aaron Rodgers returns, the Packers will be Super Bowl contenders. As shown above, the team’s roster includes a dozen or more inexperienced offensive players who show substantial promise, and who might be called upon to contribute this season. For these players to be ready, they need to have sufficient practice time with Mr. Rodgers.

As of June 8, when Rodgers failed to show up for mandatory team training, he has definitely already done real damage to the team’s chances in the upcoming season. His not being around to adequately train with his offensive teammates is inexcusable. Aaron’s right about one thing: at this point, it’s all about the people, but primarily his teammates, the coaching staffs, and the team’s fans.

Aaron’s behavior is an act of betrayal. As of the past week Aaron inflicted hurt on this great organization that can’t be undone. The longer he continues to hold out, the more damage he’ll do to our team.

I hope he returns this season, but I won’t shed a tear if he doesn’t ever wear a Green Bay uniform again.

By holding out, Aaron appears intent on attempting to destroy the team’s prospects as a way of compelling the front office to trade or release him. It’s also possible that his ego knows no bounds, or that his desire for vengeance against the front office is all consuming. None of these three possibilities, however, does any credit to the character of the reigning MVP QB

I’ll leave it to the psychiatric professionals to try to explain why one of the nation’s, and the sport’s, most admired and beloved persons would choose to take this course of action.

Maybe the explanation can be found in just four words from the King James Bible: pride goeth before destruction.

But there is a bright side to all this drama: Jordan Love is getting a boatload of valuable training opportunities, and he’s making the most of them! As I indicated a week ago, it’s looking like the Jordan Love era is about to be launched in Green Bay.

Is There a Bright Side to Aaron Rodgers Holdout?