Blake Bortles Has Lots of Upside – and One Fatal Flaw

The first thing that popped up in the minds of many Packers fans when they heard about the Blake Bortles signing was that he’s been a failure in his seven years as a pro QB. I find many reasons to believe, however, that this acquisition was a savvy move on the part of the Packers’ maligned front office.

After entering the league as the third overall draft pick in 2014, Bortles spent five years with the Jacksonville Jaguars, all as a starter. He then spent 2019 with the Rams and most of 2020 with the Broncos. He barely played in 2019, and didn’t play at all in 2020. While with the Broncs, he was waylaid when he tested positive for the virus; he and three other Broncos’ QBs were subsequently fined for violating COVID-19 protocols.

Blake had his best year, in terms of passing yardage (4,428) and yards per attempt (7.3), in 2015. Rodgers best-ever passing yardage was 4,643 in 2011. His completion percentage went up four straight years, peaking at 60.3 in 2018. He met with the most success in 2017, when he led the Jaguars to a record of 10-6. He also was on the winning end of two playoff games, before narrowly losing to the Patriots in the conference championship.

Blake played conservatively in the playoffs, going 12 of 23 against Buffalo and 14 of 26 against Pittsburgh. His best performance was in the loss to the Patriots, when he had a passer rating of 98.5 (versus Brady’s 108.4). Most notably, Blake threw no interceptions throughout that postseason.

Listed below are seven reasons to believe the Packers’ acquisition of Bortles was a wise move – and why Bortles’ career might well be revived in Green Bay.

Bortles has pro QB size: 6’5” and 236 pounds. He has remained mostly healthy, both during his three years at Central Florida and during his five years with Jacksonville. While with Jacksonville, Blake missed five games. After the Jags’ 2017 postseason run, it was announced that Bortles played through a Grade 1 right AC joint sprain and was also hobbled by tendonitis in his wrist – an indication he’s a gamer.

In his fourth year, all as a starter, Blake took the Jags into the playoffs – and played well throughout that postseason. The Jags beat Buffalo 10 to 3, and then Pittsburgh 45 to 42, before narrowly losing to the home-team Patriots, 24 to 20. How close were they to going to a Super Bowl? They led by a 20 to 10 score against the Pats with less than nine minutes to go. Notably, Blake threw zero interceptions in those three playoff games. 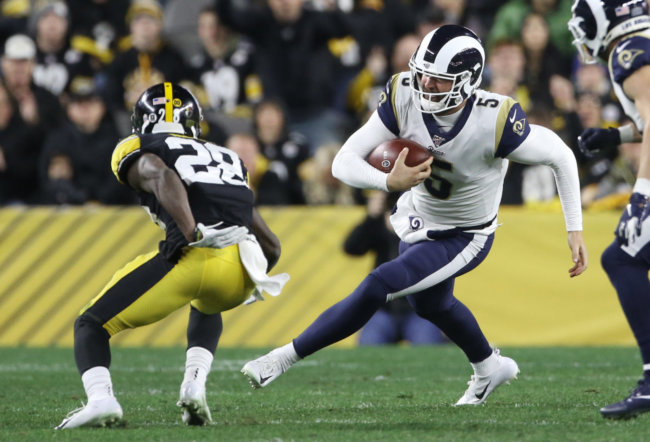 As a rookie Blake ran for twenty or more yards seven times, second to Russell Wilson among NFL QBs. In each of his five years as a starting QB, he rushed more than 50 times, and for more than 300 yards. Rodgers has exceeded 300 rushing yards only four times in 16 years. His career rushing average is 6.2 yards per carry. In his three playoff games following the 2017 season, Blake rushed for 121 yards.

Blake has also rushed for 20 or more first downs in all five years with Jacksonville. Over the past four years, Rodgers has averaged only 16 first downs per year via the run.

Whether due largely to Bortles or poor pass blocking, Blake was consistently under lots of pass pressure while at Jacksonville. He was sacked over 100 times in his first two years alone. In his final three years, however, he got those numbers down to 34, 24, and 31. Bortles led the league as a rookie in being sacked 56 times, and he was second the following year, with 51. Whether his declining number of sacks and interceptions is a credit to Blake, or more due to improved pass protection, I can’t say.

Despite picking high in the draft almost every year, the Jags have had trouble at retaining such players or getting the most out of them. Their top pick in 2016, OLB Dante Fowler (chosen third overall), was traded away in the middle of the 2018 season. RB Leonard Fournette (chosen fourth overall in 2017) was all but given away to the Patriots after the 2019 season. WR Allen Robinson moved on to Chicago after the 2017 season. Two-time Pro Bowler CB Jalen Ramsey (chosen fifth overall in 2016), had a fallout with the Jags’ front office, and was traded to the Rams midway through the 2019 season. QB Nick Foles signed a 4-year deal for $88M in 2019, but was then traded away prior to the 2020 season.

The players weren’t the only ones who made sudden exits from Jacksonville. The Jags replaced their offensive coordinator with Nathanial Hackett in Week 8 of 2016 – and then replaced Hackett in late 2018. Head coach Gus Bradley was replaced with two games remaining in the 2016 season. His successor, Gus Marrone, was fired after last season. Acclaimed college coach Urban Meyer is about to make his pro coaching debut for the Jags.

Going back ten years, the Jags have finished 4th in the AFC South Division five times, and third four times. Recent Jacksonville players have had a dismal record of achieving great success while playing there.

A big question is whether Bortles can ever get better than he was during his five years in Jacksonville, or has he reached his ceiling. When he got to within a few minutes of going to the Super Bowl after the 2017 season, he proved to my satisfaction that he has the talent to go far. Perhaps Green Bay will provide the environment that will aid him in reaching his full potential.

Consider Ryan Tannehill. He was the eighth overall draft pick in 2012, and was thrust into the starting QB job for Miami from Game 1. In six playing seasons there, he was an average quarterback, with his highest passer rating being 93.5 in 2016 – the only time that Tannehill led Miami to a winning record.

Tannehill was named the N FL’s comeback player of that year. Ryan followed up with another strong showing last season, making it to the playoffs with an 11-5 record, and with Ryan registering a fine 106.5 passer rating.

Tannehill was 30 years old when he transformed himself after switching teams – Bortles is 29. It’s conceivable that he could still become a top-tier NFL quarterback. This is especially so with the Packers, where Bortles might benefit greatly from the offensive schemes that Matt LaFleur and Nathaniel Hackett have installed. The Packers have also assembled an impressive supporting cast, including talented pass receivers, running backs, and offensive linemen.

The thing that has most held back Bortles is his penchant for throwing interceptions. During his five year period in Jacksonville, he led the league with 75 interceptions (in 75 games) – 13 of which were returned for touchdowns. He also was second to Russell Wilson in number of fumbles during that time, with 46. I believe that Blake will drastically reduce his number of turnovers if he gets significant playing time with the Packers.

Players who are still hanging around in the NFL and who have an Int% of 3.0 or greater are: Blaine Gabbert, Josh McCown, Chad Henny, Ryan Fitzpatrick, and Jameis Winston (3.4).

The correlation between interception rates and NFL quarterback greatness is astounding.

The promising thing is that Blake reduced his number of interceptions nicely in his five years with the Jags: 17, 18, 16, 13, and then 11 in 2018. In Rodgers’ first three years as a starter, he also had seasons of 13 and 11 interceptions.

Over the last 10 years, the Packers have been grossly negligent as to having competent backup quarterbacks on the roster: Tim Boyle, DeShone Kizer, Brett Hundley, Joe Callahan, Scott Tolzien, Matt Flynn, and Graham Harrell. In all that time the Packers have never had an experienced NFL quarterback as a backup to Rodgers.

They now have such a player in Blake Bortles. Some might cite Matt Flynn, but over an eight-year career he accumulated only 2,500 passing yards – Bortles has almost 18,000. Other than as a fill-in when the starting QB has been injured (7 times), Flynn never started an NFL game. Bortles has started 73 games for the Jags.

The signing of Bortles was smart, and long overdue – if only to have him available in the event Rodgers is injured and misses multiple games.

If Rodgers doesn’t play for the Pack this season, then Blake will provide spirited competition with Jordan Love for the starting job – and I think he’d win it. Having Bortles on hand will allow Green Bay to bring Love along at a comfortable pace, rather than thrusting him into being the starter before he’s ready.

In looking at Blake’s passer rating stats, as well as his touchdown numbers, I’ve concluded that but for his propensity for throwing interceptions, and his below-average number of touchdown passes, he’d have above average passer ratings. The passer rating formula gives great (and excessive) weight to these two stats. I also suspect that Bortles’ passing stats are misleading in that in most of his games with Jacksonville he was playing from behind and was therefore compelled to take great risks in most games.

Perhaps best of all, the Packers’ salary cap problem left little room for bolstering the team’s quarterbacking corps, but I believe Blake’s 1-year deal is for only about $1 million. That’s a real freefall, since he signed a contract in 2018 for $54 million over three years.

At any rate, there’s still plenty of time for the 29-year-old castoff to achieve redemption in the NFL – and Green Bay might be just the place to do it.

Previous Article
Which Rookie QB Will Have the Most Success in the NFL?
Next Article
Packers Are At A Precipice