by Rob Born
in Articles & Analysis
44

Alright, we encountered a bit of a distraction as the NFL draft spectacle commenced on Thursday. Let’s turn our attention back to what went on in that funny-looking building in Cleveland.

I’m not at all a draft fanatic. I don’t view film on 300 guys coming out of college – it would cut into my nap time. So all I’ve done here is passed on some things that more knowledgeable people have been saying about Green Bay’s new draftees.

I’ve relied heavily on the Relative Athletic Scores (RAS) formula, as have many NFL analysts. It’s a useful starting point in assessing draft picks – I think it’s here to stay. Readers’ input is needed to flesh out the strengths, weaknesses, and overall pro prospects of these nine new members of the team.

The team’s greatest need going into this draft was a competent CB, and Stokes appears to fill the bill nicely. Even before round one got underway, it seemed like Green Bay would have to trade up to get a premiere CB. Sure enough, the big names were picked off before pick 29: Jaycee Horn at #8, Patrick Surtain II at #9, Caleb Farley at #22, and Greg Newsome at #26.

Stokes has adequate size, blazing speed (4.31 dash), and he had a productive four-year experience at Georgia and in the SEC. His overall RAS was an impressive 9.37. Among the 74 CBs rated by the RAS creator, Stokes had the 12th highest RAS (85th percentile); for all prospective draftees, he ranked 69th out of 625 – 89th percentile.

There’s a tendency to regard players as slow, average, fast, or very fast (for their positions). Well, Stokes is a very, very, very fast cornerback.

The Packers’ front office pronounced themselves very pleased to get Stokes. His RAS composites were varied: speed, elite; explosion, great; size, good; agility, poor. I would think that Stokes is in line to have a solid ten-year or so NFL career. Whether he’ll ever succeed in becoming a pro bowler or All-Pro is subject to doubt, but the only thing on fans’ minds at the moment should be whether, and how soon, he’ll take over the starting job from Kevin King.

The Packers had their choice of centers on Day 2: Creed Humphrey, who had one of the two perfect 10.0 RAS’s and who many thought would be selected in the first round, or Josh Myers. Many analysts felt the choice of Humphrey was obvious, but GM Gutekunst preferred the bigger man out of Ohio State.

Humphrey had fabulous RAS composites for speed, agility, and explosion, while there wasn’t enough information to render a score for Myers, though he is the taller and heavier of the two. Humphrey wound up being taken in the next pick, by the Chiefs. In a couple years, we’ll be able to compare how each center fared.

It took a while – since Davante Adams was drafted in Round 2 in 2014 – but Green Bay finally selected a receiver before Round 4. The buzz about Rodgers has been especially hopeful, because he is viewed as an ideal slot receiver, in the mold of a young Randall Cobb.

I’m quite willing to disregard Rodgers’ overall RAS of 5.37 – on all four composite scores, he was rated just “okay.” The highlight reels indicate his speed and moves are ample to separate himself from defenders. He has a compact and muscular body.

Best of all, Rodgers spent four years at powerhouse Clemson – the final three years, his quarterback was none other than Trevor Lawrence, the first guy chosen, by Jacksonville, in this year’s draft. Amari got better every year, though he missed much of his sophomore campaign with a torn ACL. As a senior, his line was 77 catches for 1,020 yards and seven TDs – this was the most catches on the year by any Atlantic Coast Conference receiver.

It’s apparent that both the Packers front office and the fans can’t wait to see this guy out on the field – with his namesake throwing to him. He’s said to be a great yards-after-catch man, though I didn’t spot him breaking many tackles on one highlight reel. Gutekunst related that selecting Amari was his draft team’s big moment during this draft.

Expect him to get lots of playing time as a rookie, and in a lot of situations, including screens, jet sweeps, at both wide and slot receiver, and both as a punt and kickoff returner – maybe he’ll at times be put in as a running back too.

That’s right, Gutey selected two offensive linemen in the first four rounds (and another in Round 6). Newman, who like Josh Myers attended a college with a strong football tradition (Ole Miss), was measured as identical in size to Myers. His RAS (8.72) is impressive for a fourth rounder; his composites are rated elite as to speed, good as to size and explosion, and okay as to agility.

Pro Football Network’s Tony Pauline feels that “Newman could be a Day 3 Steal.” It’s felt that Newman will initially provide depth to the roster, but that he could one day become a starter at either tackle or guard.

Many expected the Packers would get some help for defensive lineman Kenny Clark in an earlier round. Instead Gutekunst waited until late in Round 5 before selecting Slaton. His size stands out, as he is 6’4” and weighs 330 – and they say he dropped 30 pounds to get there.

As you might expect, his composite agility description is “poor.” However, his explosion and speed composites are rated “good.” His overall RAS of 7.96 is about right for a fifth-rounder.

Just a few picks after Slaton was chosen, Gutekunst used a compensatory pick to acquire another cornerback prospect. He’s a small guy, and he’s the only Green Bay pick who hails from a lower college division school.

His overall RAS is an anemic 4.27; he’s rated as poor as to size, speed (4.52 dash time), and agility. But wait – a number of TV talking heads are intrigued by the guy, and Gutekunst said that he was a favorite of a bunch of Packers’ scouts. The GM noted that he gets his hands on a lot of balls, he feels he’ll be a great fit for the locker room, and he said the room was thrilled to select him.

The third offensive lineman going to the Packers is a guy from the U of Wisconsin who grew up 10 miles north of Green Bay. He’s a graduate of Bayport High School. His overall RAS is a fine 8.49; his speed and agility composites are both rated great, while his explosion is labeled “good,” though his size is rated “poor.” His 22 bench press reps is also unimpressive. GM Gutekunst feels he’s capable of playing multiple positions on the O-line.

Most fans were expecting the Pack to draft an inside linebacker, to buttress the ranks of Krys Barnes and Kamal Martin, much earlier than Round 6.

McDuffie has an overall RAS of only 7.33, and composites varying from great (speed) to good (explosion) to okay agility) to poor (size). Though he was a prolific tackler in college, he’s undersized for the pro game.. On the other hand Krys Barnes is listed at only 229 pounds, while Kamal Martin weighs in at 240 pounds.

Chosen three players before the year’s final selection, Hill is a running back who might have a realistic chance to catch on with Green Bay. He’ll be competing against Dexter Williams, Patrick Taylor Jr., and Mike Weber for a roster spot, or at least a spot on the practice squad.

In 2019 Hill rushed for 1,350 yards and scored ten touchdowns for the Bulldogs. This performance landed him on the AP first team All SEC team, and he made the second team in the coaches’ poll. However, he played in only three games this past season, before opting out to get ready for the NFL draft.

Gutekunst indicated his staff was excited to find him still available in the final round of this draft.

CBS Sports liked all of the Pack’s top three picks. They liked the added “dynamism” at CB and WR, “with Rodgers in particular bringing some long-awaited juice to the slot spot.”

Sportingnews.com ranked the Packers 15th out of the 32 teams. The Pack’s division rivals, however, were graded as having the 2nd best (Vikes), 4th bwest (Bears), and 9th best (Lions) drafts.

Pro Football Focus gave the Packers a grade of C-. They termed Eric Stokes a “major reach.” As to Amari Rodgers, they had this critique: “Right now he’s a bubble screen, jet sweep and deep-post runner, so the Packers will hope he develops a more well-rounded game.” They did praise Jean-Charles, however, saying he “locked up everyone he saw on the outside at App State in 2020, allowed just 17 catches across 52 targets while making 18 plays on the ball.” Chicago was given an A+, Detroit an A-, and Minnesota a B+.

Walterfootball.com gave Green Bay an F grade – though they seemed more interested in panning last year’s pick of Jordan Love than in focusing on this year’s picks.

Yahoo! Sports handed down a grade of C- to the Packers. Their least favorite pick was Eric Stokes: “For all of Stokes’ athletic gifts and his quality length, he remains quite raw.” Their favorite pick was Amari Rodgers, of whom they said: “His quickness, reliability, competitiveness and burst all could work in Green Bay … assuming QB1 comes around on his scorched-earth mindset.”

The Crux of the [Rodgers] Problem – and the Resolution! 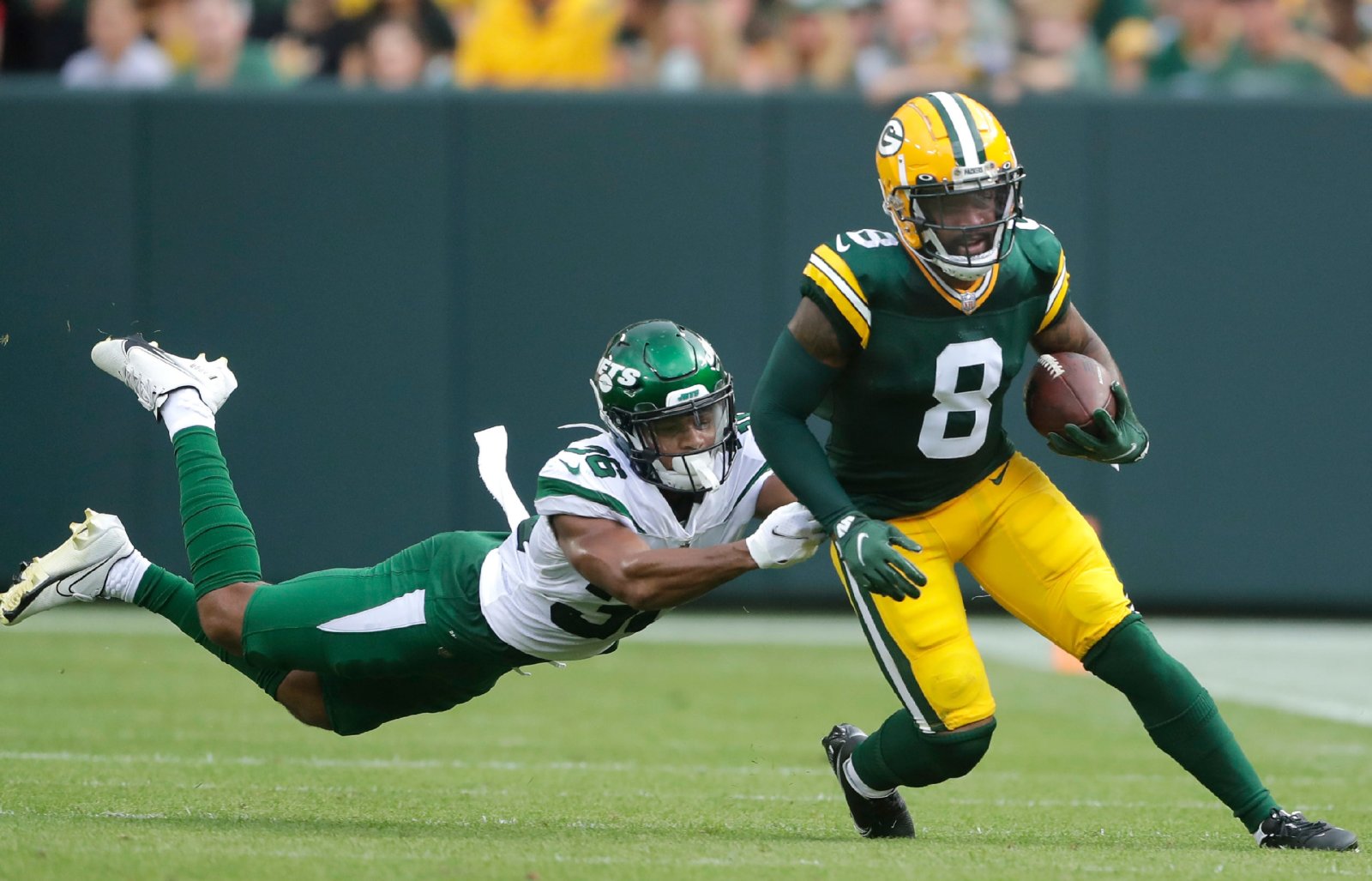 The Crux of the [Rodgers] Problem - and the Resolution!