2021: Will the Packers Draft Your Favorites? A Bit of Fun Ahead of the Draft

It is mid April. While others will begin publishing mock drafts, most of us would agree that a mock draft that actually gets one actual Packer selection correct is ahead of the mock draft masses. Mock drafts are just a fun way to dream about the upcoming season. With fun at the forefront, this article will focus on players that if drafted by the Packers, will be fun to watch in a Packer uniform. Then we take it a step further and list the “All Name” team. The “All Name” team has the best first, last or combo of names for either a football player or for their specific position, or the name will be fun to say for announcers during the game. Hope you have fun with it.

Collins is known to Badger fans from their annual bouts with the Wolverines. In 2019 he had a 32 yard catch among his three catches totaling 66 yards. In 2018 he had four catches in Michigan’s win. Collins is as fast as Davante Adams but three inches taller. He is very fluid in his routes and breaks and can make contested catches look easy. Playing at Michigan he has practice adjusting to inaccurate throws. He could be available in round 2.

Moore has such potential in LaFluer’s offense. He is not only straight line fast he is quick. Moore ran the three cone in 6.66 seconds (fastest in NFL history is 6.42) and a short shuttle in 4.0. (NFL record 3.82)

LaFluer’s offense would allow Moore to be used as a slot, motion receiver or motion starting in the backfield just like Lane Kiffin did at Mississippi. He also has special team return experience which the Packers could desperately use.

Radunz comes with questions due to the inferior competition he faced at NDST. He needs to fill out a bit but his Senior Bowl practices were impressive and he has no problem playing in snow or wearing green and gold.

Tucker has experience at left guard and left tackle. He has good movement skills and projects well in a zone blocking scheme. He played only one college season at left tackle so a year of development could produce a quality guard or tackle.

Wisconsin Whitewater’s media favorite has hooked me with a combination of his Senior Bowl practices, his workout video, and his belly of pride. 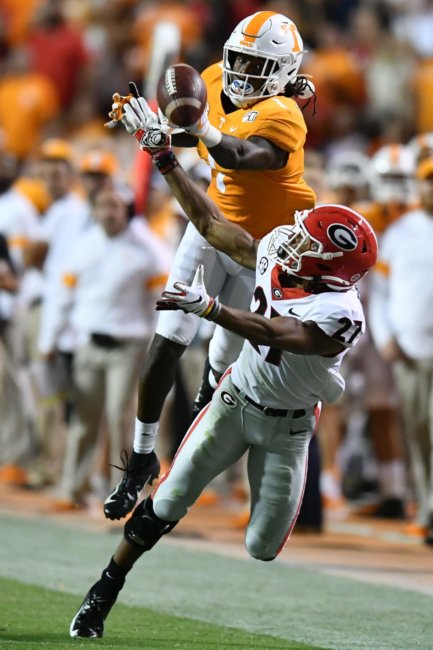 Georgia defensive back Eric Stokes (27) attempts to intercept a pass intended for Tennessee wide receiver Marquez Callaway (1) during a game between Tennessee and Georgia in Neyland Stadium in Knoxville, Tennessee on Saturday, October 5, 2019.

Georgia’s second corner has big play making history in big games and a self confidence and forty time to run with any receiver in the league.

Robinson has good man cover skills and show the speed to match NFL receivers at his pro day. He had extensive slot corner experience and he tackles like a safety. The one concern, a prior concussion that caused him to miss games.

Ohio State’s most reliable linebacker Werner impressed with a 4.58 forty at his pro day. Werner can take on a block with his 33 ¼ inch arms and cover short routes in the passing game. He also has stayed on the field (35 starts) and made big plays, like his two fumble recoveries against Wisconsin in 2019.

McNeil played at the Nose position on NCST’s defense but has the quickness to play end in a 3-4 defense. His length is below the average for the position but he is bigger than former tackle Mike Daniels.

Williams is too small by NFL size parameters but has numbers that equal or better Aaron Donald speed and explosion. His sack numbers are high but against lower level competition. I have watched some tape (TCU vs. L-Tech) and his monster numbers did not equate to stops. TCU ran for 330 yards against L. Tech. But he sure is a workout warrior with tools that could be developed.

OC: Creed Humphrey: From Apollo Creed to the sequels, they pack a punch.

RB: Kenneth Gainwell. His last name is his goal

TE: Pro Wells: Guess his dad really wanted a pro for a son.

DE: Shaka Toney: Named after the King of the Zulu’s.

DT: Osa Odighizuwa. Osa was a name for a Russian missile class warship in the 50’s and 60’s.

ILB: Jamin Davis: “I hope you like Jamin too…”

S: Divine Deablo (phonetically an angel and a devil)

Honorable mention: Punter Max Duffy: Too close to Duffer for a job where you can shank your drives