On the Gridiron or Hardwood, Athleticism Usually Prevails

You probably watched the Baylor Bears demolish the Gonzaga Bulldogs in the finale to March Madness. There are lessons to be learned from that game that are applicable to the Green Bay Packers.

All through the season, only a couple of the sports writers who vote every week on who is the top college basketball team got it right. What you saw was an above-average team of Gonzaga athletes meet up with an elite group of Baylor athletes. It was the tough guys versus the smoothies, iron-pumpers versus the Pilates class, beef eaters versus vegans. It was no contest.

The first thing that became apparent was that the Baylor rebounders ruled the boards, and they unsurprisingly remained that way throughout the game. While both teams were roughly the same height, the Baylor big men were chiseled. They had muscular legs, v-shaped torsos, and impressive upper-body bulk. Baylor players, unlike the Zags, obviously spend a lot of time in the weight room.

The disparity was even more pronounced between the front courts. While Jalen Suggs was clearly the most athletic Gonzaga player, Baylor had three guards who made him look puny in comparison. Unfortunately for the Zags, the Bears weren’t just physical specimens – they were lightning-quick. To that, you can add that the Bears led the nation in three-point shooting percentage. This rout should have been fairly predictable. 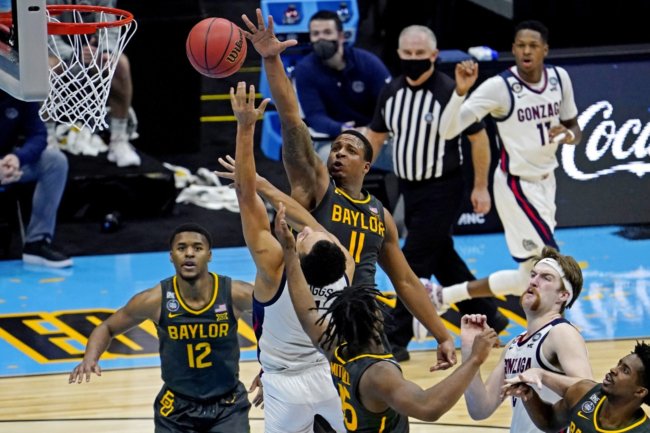 Apr 5, 2021; Indianapolis, IN, USA; Gonzaga Bulldogs guard Jalen Suggs (1) shoots the ball against Baylor Bears guard Mark Vital (11) during the second half in the national championship game during the Final Four of the 2021 NCAA Tournament at Lucas Oil Stadium. Robert Deutsch-USA TODAY Sports

If basketball had the equivalent of the NFL Combine (which wasn’t held this year, though Pro Day events are prevalent), the elite nature of Baylor’s guys would have been quantifiable: their vertical jump scores would have been much better than the Zags’; their bench press reps would likely have doubled that of their opponents; their 3-cone drill, 20 yard shuttle, and 10-yard dash splits times would have provided proof of their superior quickness. I suspect that even their hand sizes, arm lengths, and weights would have been the match of any other college team in the nation.

In addition to their rebounding dominance, any one of their three top guards had such lightning fast moves that they could all launch 3-pointers at will, just by taking one fast step toward the basket and pulling up for the shot, or by making one quick-step back and letting fly. Gonzaga, on the other hand prepared to launch at least a dozen 3-pointers only to have defenders react so quickly that they decided to pass up on the shot.

I have no idea how Baylor assembled such a deadly mix of elite athletes and precision marksmen, but it’s apparent that when Baylor recruits they hone in on the nation’s best high school athletes. Actually, they manage to do it mostly without leaving the Southland, as they have multiple players from Texas, Louisiana, Georgia, and Ohio. They also brought in their big men from Cameroon and the Republic of Congo.

Lessons for the Packers

In some cases, players are not terrific athletes across the board, but they have one or two exceptional traits that account for their achievements. Examples are: Davante Adams (lightning quick feet and jumping ability), Marquez Valdes-Scantling (speed and acceleration), and Darnell Savage (speed and burst).

As draft time approaches, we’ll soon see if Gutekunst continues to highly value elite athleticism. You know what they (I) say: when it comes to athletic endeavors, athleticism is important. Let’s make that “crucially important.” Gonzaga Coach Mark Few must be thinking that right about now.

Previous Article
Rashan Gary Needs to Cut Loose Come September
Next Article
Will the Packers Repeat Their Late Round Trend?