The Packers have two starting safeties under contract for 2021. Adrian Amos has been dependable if not flashy. He has made his share of game saving plays. Darnell Savage Jr. will be starting his third year and needs to make a jump. He had some good plays in 2020 but was picked on by Brady in the NFC championship and still struggles with missed tackles, tackling angles and big receivers. Perhaps a new scheme from new DC Joe Barry will help. Packer fans have their fingers crossed. Currently, if Amos or Savage were injured, the ranks become a bit thin. Rookie Vernon Scott played well in limited minutes and undrafted free agent Henry Black made a play or two. Will Redmond still struggles with open field tackling and the occasional assignment error. If the Packers draft a safety, it may be to play dime LB or the hybrid sixth DB to replace injury ridden Raven Greene. If this safety could play the slot, an upgrade would improve the 2021 defense no matter what scheme is played.

The 2021 draft has more than a dozen prospects that could be picked in the seven round NFL auction barn. Some candidates are best suited as center fielders, others as box hybrid tackling machines. There are players to meet every team’s need, the question that will begin to be answered on April 29th is whether they will be available when the needy team selects.

One of the most interesting subplots of the 2021 safety draft will be where the two TCU safeties are drafted. Almost every site lists Trevon Moehrig as the top safety. At 6’1” and 208 pounds he has the NFL frame scouts are looking for. But if you review game tape he might not be the best safety on his Horn Frog team. Pundits seem to agree that TCU had the best safety tandem in college football. His safety partner had more game changing plays but does not fit the NFL parameters for a safety. Ar’Darius Washington is listed as 5’8” and 179 pounds. Those numbers scream IR in the NFL. Bob Sanders was a 5’8” safety that played at a high level for a few years but he weighed 208 pounds. In his 4th season he was voted NFL defensive player of the year. It was the last time he would come close to playing a full season. After 2008, he never started more than 2 games. Washington makes great plays on the ball and is a willing tackler but the laws of physics don’t change for any player. Moehrig had many passes defensed but analysts say he needs to improve his tackling and is susceptible to double moves. Some analysts say Moehrig will go in the first round. Washington is more of a 4th round gamble who may need to transition to a slot corner. ESPN does not even list Washington as a draft-able player. CBS has him as a top 150 player. 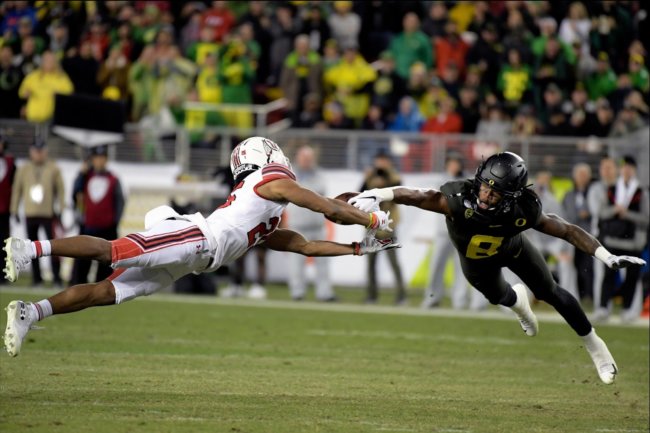 The next group of safeties include Jevon Holland of Oregon (6’1”/200) and Hamsah Nasirildeen Florida State. (6’3”/220). These two safety prospects are almost polar opposites in their strengths and weaknesses on the gridiron. Holland has experience as a slot corner where he excelled. He had 4 interceptions two years in a row. He fits the NFL size requirements at 6’1” and 200 pounds. His injury history is relatively clean but he opted out of the 2020 season. His tackling is criticized by more than one analyst but one site has him as a top 10 pick. Nasirildeen is a tackling machine who also has good short area burst. His 2019 season included 101 tackles, 2 interceptions and three pass deflections. Unfortunately, his season ended with a torn ACL that only allowed him to play in two games in 2020. Would the Packers risk a pick in day two on a safety who had questionable top end speed before an ACL injury? There has to be less risky picks out there. Another top rated safety coming off of an ACL injury is Andre Cisco of Syracuse. (6’1”/209) As a freshman at Syracuse, Cisco had 60 tackles, 7 interceptions, and 9 pass deflections. In 9 games in 2019 he racked up 65 tackles, 5 interceptions- including a pick 6, and 5 pass deflections. Unfortunately, he suffered the ACL in a 2020 pregame collision with a teammate after only playing two games. Medical reviews will factor into his draft status.

Sporting News, ESPN and CBS all list the next group of four safeties:

Ford is only 199 pounds but he is very aggressive. Pundits have used terms like, “fearless” and “instinctive” to describe his play. In 2020 he played 7 games, collected 3 interceptions, 30 tackles, 3 passes deflected and 3 TFL’s. He then shut it down.
Ford is said to run fast. Speculation is he will run under 4.5 in his pro day 40 yard dash. That is scheduled on March 17th. If he runs under 4.5, his stock could rise significantly. 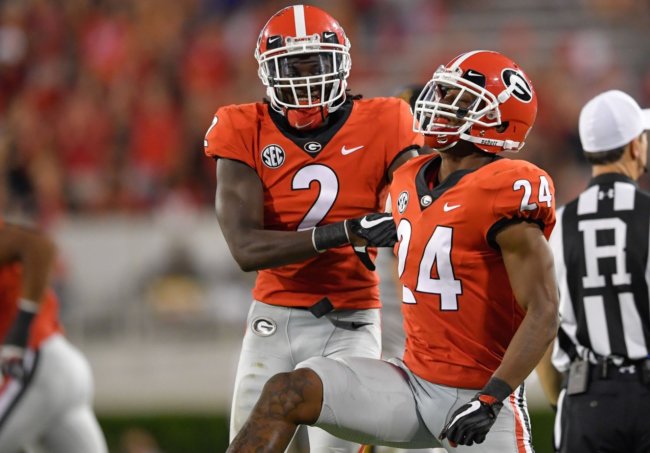 LeCounte III, has an ability to process the offensive keys in front of him and use great reaction times to thwart opponents play designs. He is a football film junkie and student of the game. His tape at Georgia is excellent. Can he make game changing plays? In 2019 he was responsible for seven of the Georgia defense’s 14 turnovers. Capital, “ P” playmaker. His limitations? He may not have NFL top end speed and for a safety, he is small. His listed weight of 190 may be five to ten pounds above his playing weight. His pro day in March 17 will be critical to his draft status.

Sterns is a solid run defending safety who shows some coverage skills. He is very aggressive in his reads and can find himself over committed on double moves and occasionally on angles for tackling. Stern’s major draft concern is his injury history. Two knee injuries and then a turf toe injury had him miss multiple games in every college season. He has true injury based boom/ bust potential. He just helped his cause by running a legit 4.4 forty at his pro day.

Blankenship played mostly against small school competition although in 2019 they did play Michigan, Duke and Iowa, all double digit losses. He totaled 24 tackles in those three games but Iowa posted 293 passing yards and 351 rushing yards to go with 48 points. Iowa set a new record for points scored in the Kirk Ferentz era. Two weeks prior Duke QB Quentin Harris had more TD passes than incompletions against Blankenship’s secondary. The best team that MTST Raiders played in 2020 was Army, who throttled them 42-0. Can this kid really be ready for the NFL?

Other safeties drawing interest include:

Damar Hamlin (6’-5/8”/201) is the second Pitt safety in this draft but does not receive the “buzz” of Paris Ford. Hamlin has two solid years of good tape at the safety position for Pitt, earning All-ACC Second Team honors in 2020 while amassing 67 tackles, 7 pass breakups, and 2 interceptions. His first two years at Pitt were marred by injuries but he has been relatively healthy for two years.

Shawn Davis (5’10.5”/199) played mostly high safety at Florida. He has experience as a one high and two high safety. He has good burst and can cover ground and make interceptions but he also has sloppy tackling habits and often seems to try to pick balls with one hand. That said, he has 5 interceptions and 126 tackles in his Gator career. Davis’ injury history may make him slide. He missed the final 5 games in 2020 and first month of the 2018 season. He has never started all of the games in any of his college seasons.

Jacoby Stevens (6’1.25”/216) led the LSU Tigers defense in 2019, all the way to the college championship. His 92 tackles 5 sacks, 3 interceptions, 6 passes defenses and 9 TFL’s were an integral part of that championship. He has played linebacker and safety and he has potential as the hybrid linebacker in the Packers defense. His only limit is his size/speed makes him a bit of a tweener between safety and linebacker in the NFL.

Tyler Coyle (6’2”/215). Connecticut’s leading tackler in 2019. (85 tackles, 1 interception. 9 pass break ups) He ended his Huskies’ career on a high note but did not repeat his performance for his transfer school, Perdue, in 2020. He played in only 4 games in 2020 due to a foot injury. Missing multiple games to a foot injury is not a good prequel to an NFL career. Just ask Vince Biegel. Coyle did come back in the last game of the season and had 11 tackles. Coyle could be a box safety at best, hybrid LB at worst.

Richie Grant-UCF (6’/200) turned heads with a great senior bowl week of practice. Scouts said he played man to man assignments like a corner and also has great tape as a run support safety. In 2018 Grant burst onto UCF’s defensive backfield and filled out the stat page. (108 tackles, six interceptions and two forced fumbles). His tackle totals in 2019 (78) and 2020 (73) are still respectable but until the Senior Bowl, Grant was under the pundits radar. Grant has good instincts and initial burst but scouts worry about his overall speed as there are times he seems to take too long to get to the flats. Part of the reason Grant was named All- ACC was his run support. Grant checks a number of boxes, but his draft position may be linked to his 40 yard dash time.

Christian Uphoff (6’2”/213) of Illinois State is another overlooked prospect who has jumped up in pundits minds and voices thanks to his great senior bowl practices. His college tape was against lesser competition but he looked like a man amongst boys on film. Uphold was voted the top safety of the Senior Bowl’s National squad. He made a couple of good special teams plays during the game too. He did not have a 2020 season due to Covid.

Mark Webb (6’1”/210) Georgia’s second safety prospect had injury issues in 2020. He sat out their bowl game, watching with a protective boot on his injured leg. He started only three games in 2020. In 2019 he started nine of fourteen games for the Bulldogs. In 2017 Webb missed time with a torn meniscus. His four year career totals at Georgia include 82 tackles and 1 interception. Webb mostly played the “STAR” position at Georgia which is their version of the hybrid linebacker/safety.

Divine Deablo (6’3”/226) came to W.Virginia as a receiver and was transitioned to safety as a sophomore. He ended his career being voted team captain and wearing jersey number 25 five times, a V-Tech tradition to honor the best special teams player of the past week. He has 206 tackles and six interceptions in his college career and was named All-ACC first team. His strength would be lining up against tight ends or slower running backs. He does not seem to have the top end speed or the quick twitch hips of a true back end cover safety. He might be best used as a hybrid linebacker/safety.

Tyree Gillespie (6’/207) spent his first two years at Missouri excelling on special teams. He became a starter mid sophomore season and kept the job for 2.5 years. He improved both his technique and stats every season. His film shows good technique in angles, tackling and coverage. One writer claimed he only gave up seven passes last year. He has experience in man and zone coverage schemes. If he runs fast at his pro day, his draft status could rise. So where is the knock? He never made an interception in his college career. Not a big play maker and his defensive team was mediocre. 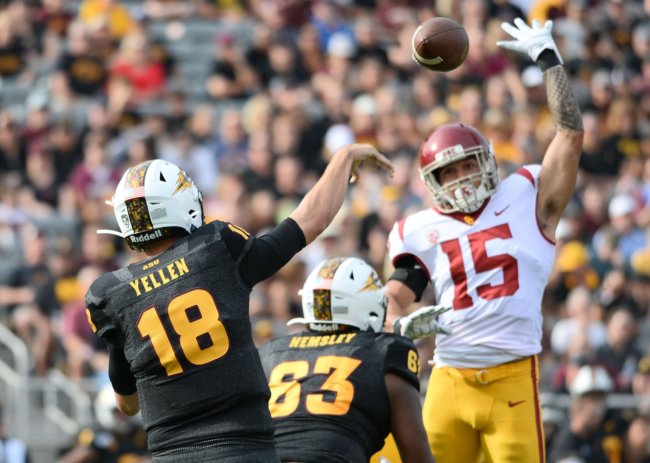 Last but truly not least is Talanoa Hufanga (6’1”/215) who is characterized as a box safety out of USC. But game film shows a player with some coverage skills and decent looking speed. I don’t think it is just the hair that brings some to start making Troy Polumalu comparisons. Hufanga has some skill and is a willing tackler who can stop running backs in their tracks.

This draft doesn’t have super star first round safety talent but the third day should have a deep pool of potential to develop. Let’s hope the Packers find a nugget in the deep end of this safety draft.