Though no one else seems to be, I’m a Packer fan who’s worried.

In fact, I’m very worried about the NFL’s restricted free agency provisions. In the vast majority of cases, players due to become restricted free agents are retained by their current teams. My fear is that Robert Tonyan might well prove to be the exception in 2021.

Tonyan is not your typical RFA. Though he’s been with the Packers since 2017, he’s only been allowed to show his stuff to any extent for one year. In 2020, Tonyan’s stats were 52 catches for 586 yards, 11 touchdowns, and a fine 11.6 yards per catch average. While the 11 TDs has drawn the most attention, I’m more impressed by his catch ratio – he was only targeted 59 times last season, so his catch rate was an incredible 89.6% (counting playoffs).

I mention the Giants’ Engram because he was named a Pro Bowler, ahead of Tonyan, which a few months ago caused Packer fans considerable consternation. The fans were right. The obvious reason that Tonyan was overlooked was that he was under-utilized. Though healthy all year, he was thrown to only 59 times in the regular season By comparison, Kelce and Darrin Waller (both AFC Pro Bowlers) were thrown to 145 times, which tied them for sixth in the league among all receivers. Engram was thrown to 109 times, nearly double that of Tonyan.

Now, there will be those who will say that Tonyan, after just one good year, isn’t a proven top tight end. I’m not one of them. Tonyan has all the tools: size, speed (4.58 dash time), great hands, big catch radius, big play ability, great competitiveness, hands of glue. He’s also a dedicated off-season workout guy, and he’s becoming a fine blocker. For what it’s worth, I have Kelce and Kittle in my top tier at the position, followed by Tonyan and maybe three others in the second tier. 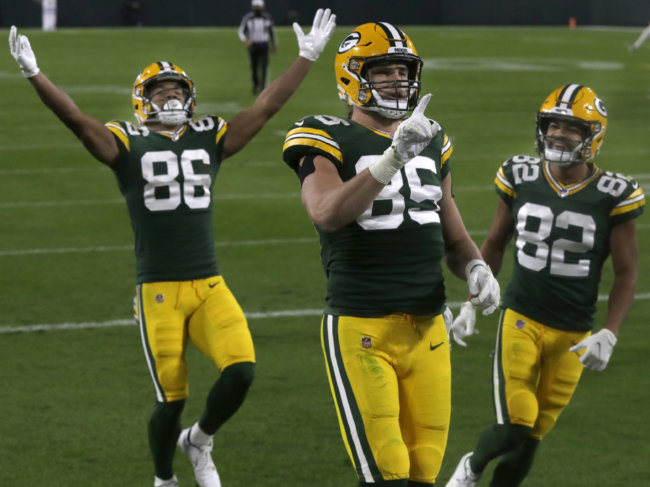 The Packers surely know what they have in the 26-year-old, who has been largely overlooked since he came out of Indiana State. Or do they? We’ll find out in just a few days – that’s when Brian Gutekunst needs to designate him as a first-round tender or a second-round tender. The first choice would mean he’d be paid $4.766M in 2021, while the second choice would cost the team $3.384M.

Almost every commentator out there seems to think Gutey (and Russ Ball) will opt for the second-round tender. If they do, I think – I fear – the Packers will lose Big Bob.

Here’s the problem. While Green Bay as I write this sits at just over $1 million below the cap (according to spotrac.com) there are 25 teams with more available money than Green Bay. The four teams that have the most cap money available are the Jags, Jets, Pats, and Colts, who are $70, $69, $65, and $48 million under the cap. Should any of them, or any other team (eight more are over $30M under the cap), submit a bid for Tonyan, it would be implausible for the Packers to match it.

There’s arguably a saving grace to the RFA provisions: compensation. The reason they are named first- and second-round tenders is that, depending on how the Packers designate their tender, if another team’s offer isn’t matched by Green Bay, that team must turn over their upcoming first- or second-round draft choice to the Packers. I greatly doubt that another team would be willing to give up their first-round choice in exchange for Tonyan. However, I do think one of more teams would be willing to give up its second-round pick in order to acquire a player with Tonyan’s talent, productivity, and prospects to become even better.

Looking at just the four teams who have the most available cap space, here’s what thedraftnetwork.com says are their primary and secondary positional needs: the Jags and Pats are rated as having a primary need for a tight end, while the Jets and Colts are said to have a secondary TE need. As for where these four teams are lined up for the draft, the Jags have the top pick in the upcoming draft (and also the 25th overall pick); the Jets are right behind them at number two (and they also have the 23rd pick). The Patriots are fifteenth in line; and the Colts are 21st. I therefore doubt that any of the four teams would compete for Tonyan if the Packers give him the first-round tender designation.

If Gutekunst chooses the second-round designation, however, I fear that he’ll place our team at great risk of losing Big Bob.

According to ourlads.com, the current depth charts of these four teams indicate the starting tight ends as James O’Shaughnessy (Jags), Christopher Herndon (Jets), Ryan Izzo (Pats), and Jack Doyle and Mo Alie-Cox (Colts). Unless I’m mistaken, these are far from being blue chippers. Yeah, the four teams who are most under the cap could all benefit from a big upgrade at tight end.

For once, I hope I’m mistaken – either about how the RFA provisions work, or in thinking that some other team will value Tonyan as highly as I do. The Packers have a tough choice coming up. If they exercise the first-round tender, it will cost them about 4.8 million (all against the salary cap), but given the compensation aspect, it is highly unlikely that any other team will pursue him. However, if Green Bay opts for the second-round tender, the cost will be about $3.8 million. I hope the Packers can scrape up the extra million to all but assure that Tonyan remains in Green Bay – even if it’s only for the upcoming season.

Additionally, should Tonyan be retained, it will be criminal if he isn’t thrown to at least 80, and preferably 100, times during the next regular season. It took Green Bay a long time to fully utilize Davante Adams, we never took full advantage of Jordy Nelson, and we under-utilized Aaron Jones for four years. Let’s not repeat those mistakes with this gifted tight end.