The debate rages: how can the Packers refrain from a decline in its player personnel compared with last season – or perhaps even have personnel improvement in 2021?

Given the team’s salary cap woes, it might seem impossible. But what if a number of Green Bay players on last season’s roster play considerably better this season? I propose, as Exhibit A, Preston Smith, who at age 28 is about to embark on his seventh pro season.

Almost everyone, myself included, opined that Preston Smith would be released prior to the official start of the 2021 season. We were wrong, because we were ignorant of the terms of Smith’s contract. Those terms made it highly unlikely that the Pack would part with Smith: to do so would have resulted in a big salary cap hit even though he was no longer on the team.

By reworking Smith’s contract, GM Gutekunst was able to keep him for another year at nearly the same cost as it would have been to release him – so retaining him was actually a no-brainer. I believe that the Packers will be able to release him after this season, without incurring a big cap hit – and this will greatly aid the team in its salary cap struggles next year. 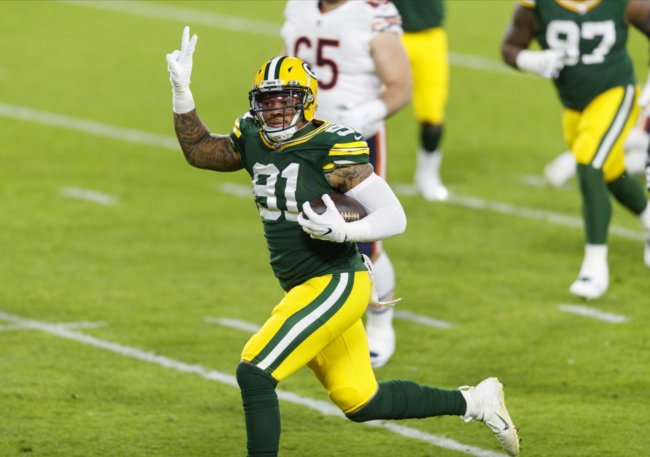 From his up-and-down record, I have to conclude that Preston needs lots of motivation in order to play well. This might work to the Packers’ advantage this season, because if Smith wants to ever get another big-money NFL contract, he’ll need to put up numbers like he did in those odd-numbered years.

Smith’s 4-year deal with the team had him averaging an overly-generous $13 million per year. If Preston turns in a second consecutive clunker of a season, his free agent pay potential will be about a fourth of what his original contract with the Packers provided.

As proof of his ability and potential, when Smith participated in the NFL Combine in 2015, he was above average (for one-gap defensive ends) in all eleven physical measurements and test marks. The then-Reskins selected him with the 38th overall draft choice. At the NFL Combine, he was measured at 6’5” and 277 pounds; he’s now listed at 265 pounds. It’s not a question of whether he can again perform like he did two, four, and six years ago – it’s a question of will he be inspired to do so.

Pro football Focus rated Smith as follows last season: 89th out of 109 edge defenders overall; 41st at run defense, 94th at pass rush, and 93rd at coverage. Gutekunst and Packers fans are hoping that Smith will bounce back in a big way.

That’s right, Rashan tops all 108 other comparators when it comes to pass coverage. And yes, those NFL Combine numbers are a good indication of a player’s potential: Gary was 95th percentile in the dash (4.58 seconds). His percentile rank at the vertical jump was 95th, his 20-yard shuttle rank was 86th, and his wingspan measurement was 87th.

But getting back to Smith, based on PFF grades, in pass situations the Pack would ideally play Z and Gary; in run situations, they’d want Preston and Z; should the Packers want an edge player drop into coverage, they’d want Rashan to be the one, as both of the others rank in the 90’s as to coverage.

The Packers need to find a way to inspire Preston to give maximum effort on the field. An example of Preston’s laziness is his propensity for jumping offside. He’s done this about a half-dozen times since joining the Packers. He’s not fooled by the quarterback’s cadence – he simply tries to guess at when the ball will be snapped, which often gives the opposition a “free play” in which to launch a deep pass, or a second chance to convert a third down.

If Preston Smith wants to be on the field for the bulk of the defensive snaps this season, he’s going to have to outperform third-year edge rusher Rashan Gary – which I frankly don’t think he’ll manage to do. Even if Gary overtakes him, however, the Packers should possess one of the league’s better edge rush threesomes. I would also expect the new defensive coordinator to freely platoon them according to the opponent and down and distance. In the event that Za’Darius or Rashan are injured, Preston also gives the team decent depth at the position.

By the way, Preston has now played in 96 games as a pro – he’s yet to miss an NFL game due to injury. He also stayed pretty healthy during his four seasons at Mississippi State.

If Preston is able to return to the form he displayed in 2019, it will give Green Bay a big boost on pass defense – which is where they most need help at this time.

Previous Article
Various and Sundry Offseason Observations
Next Article
Can Packers Step Up Even Higher This Season?