Last Monday Wes Hodkiewicz published an in-depth article on the Packers’ website about Aaron Rodgers’ journey to his third NFL MVP award. Hod attempted to explain how Rodgers and his team turned in “one of the most decorated quarterback season in league history.”

From the first days of training camp, Hod noted that Rodgers was off to a strong start. When asked about his fast start, Rodgers said it had to do with his review of a film session from the 2010 season. He refused, however, to share the precise secret with us.

He apparently even kept Coach LaFleur in the dark. When asked about it, LaFleur replied: “I’m not exactly sure what he saw but I like how he’s playing right now. LaFleur summed up Aaron’s worth this way: “He’s the heart and soul of our football team. . .Just so appreciative of him buying into what we’re trying to get done around here and leading that group.”

Two days after the NFC title game Rodgers made his regular weekly appearance on “The Pat McAfee Show,” and McAfee asked his buddy to reveal the secret as to what he saw in the 2010 film study. Rodgers said it had to do with sinking into his hitch at the top of his drop-back, and needing to put more weight on his knee when he stepped into the throw. Aaron also relayed that he did more conditioning and training in the offseason to strengthen his legs and regain trust in his knee.

And there you have the explanation of how Rodgers was able to return to his MVP form of 2011 and 2014. Only I’m not buying it.

I don’t doubt that Rodgers’ story about the film review and putting more weight onto his knee as he steps into his throws is true, but I hardly think this was the key to Rodgers’ transformation.

Right off the bat, why would this observation be kept such a secret? Why would the QB not even share it with his head coach? The fact that Aaron finally revealed the secret on his BFF’s program smacks more of hyping his buddy’s weekly show than anything else.

I don’t think you go from a passer rating of 95.4 to 121.5 due to an adjustment in your throwing mechanics. You don’t so easily go from 21st in the league in completion percentage to the top of the heap. You don’t go from 18th in the league in scoring to first – based on a weight shift. It takes more than that to go from around a top-10 quarterback to MVP.

You sure as hell don’t go from one of the league’s most-sacked QBs, year after year, to being sacked 20 times in 2020. In fact, take away the Panthers and Bucs games, and Rodgers was sacked 11 times in the remaining 14 games – that can’t be explained away by a change in Rodgers’ throwing motion.

Aaron is known to be a consummate media relations guy. When things get dull, he’s always there to create a bit of mystery, drama, or even controversy. Aaron does as much to create deception and misdirection off the field as he does on it. I think he “pranked” most of Packer Nation with that Super Bowl season film study revelation.

In a 2019 post, in a subsection titled “Time to Throw,” I used Next Gen statistics to show that Rodgers, though still possessing one of the NFL’s best arms and best minds, was wallowing near the bottom of the league in the time it took him to select his target and launch the ball on its way. I advocated that he use Drew Brees as a role model for quickly selecting a target and getting the throw off. I concluded the post as follows:

“My remedial plan is simply to establish ‘time to throw’ as the primary yardstick of Rodgers’ performance. It should be the main focus at practices, and diligently graded and studied following each game. . .Put succinctly, Aaron has become too slow in making his throws. He needs to grip it and rip it. Maybe the above proposal, or some version of it, would help.”

In 2020, Aaron actually surpassed Drew, the master of the quick release, in completion percentage: 70.7 versus 70.5.

After lots of referencing back to my earlier post, I related that, just two games into the 2020 season, my eyes beheld Aaron Rodgers releasing the ball much more quickly than he had in the past. I made bold to predict things to come the rest of the season based on just those first two games[Link]:

“I’ll be closely tracking Aaron’s TT (time to throw) stats over the course of the season, watchful for signs of regression. I’m hopeful that LaFleur and his coaching staff will do the same.

If Rodgers can stay on track all season, we’re looking at passing efficiency that can match that of his 2014 or 2012 seasons. Even without a big change by Rodgers, now that Matt LaFleur is in his second year of installing his potent brand of offense, I’d expect a 10-point increase in Aaron’s passer rating, which slid to 95.4 last year, from that alone.

The legendary veteran might even approach his record of 2011, when he established the all-time NFL passer rating standard of 122.5. The only thing that stopped that juggernaut of a team from grasping the Lombardi Trophy was a porous defense.”

There you have it. Rodgers did indeed threaten to surpass the league’s best-ever passer rating. He also led the league with a 70.7 completion percentage, which handily bested his previous efficiency marks in 2014 (65.6%) and 2012 (67.2%). I also predicted a big uptick in the team’s third down conversion rates, and a greater time-of-possession differential – all keyed by Aaron’s time-to-throw improvement. All these speculations came to pass.

About a month ago, I did a preliminary review of some of the predictions I made based on what I saw in the first two games of the season. In the subsection titled “Quick Passing,” I made some further predictions:

“Though Aaron strayed a bit from his quick-release practice during the season (finishing at 2.72 seconds), I believe his big improvement in this area accounts for his very low number of sacks, 20, on the season. If Aaron releases his passes in the 2.5 seconds range versus the Rams, Aaron Donald and his mates won’t be getting any sacks – regardless of how well or poorly the Pack’s O-line blocks. The quick release is the optimum way of thwarting a strong pass rush. It also frustrates the hell out of those mammoth pass rushers.”

One day later, the Packers trounced the Rams by a score of 32 to 18. Wonder of wonders, against a team known for its stifling defense, Rodgers went 23 for 36, for 296 yards and two touchdowns, the team went 8 for 12 in third-down conversions, they ran up 484 total yards, they had 12 more minutes of time of possession – and Rodgers was never sacked. (Sorry, I don’t know what Rodgers’ time-to-throw average was against the Rams or the Bucs.)

Forget all that jazz about Rodgers doing lots of leg training and stepping into his knee more when he releases his throws. For now at least, I’m sticking with my theory.
More than ever, I believe that Rodgers won that MVP trophy because he made and kept a commitment to more quickly select a receiver and send the ball on its way to him. If he keeps the commitment again in 2021- and beyond – many more good things are in store for Packer fans. 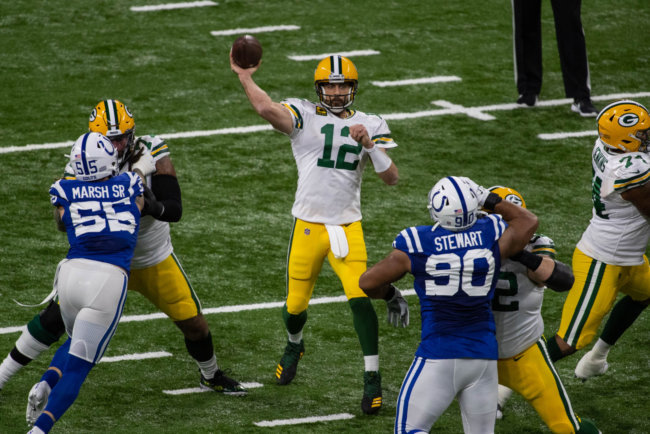 Previous Article
Super Bowl (and Playoffs) Provided Some Lessons for Green Bay
Next Article
Will Thompson’s last draft cost the Packers another Watt All- Star?