The Packers will probably have 10 picks in the 2021 draft. One pick in each of the seven rounds, each selection based on the Packer’s final post playoff standings. The Packers will have the 29th selection in each round. They are also eligible for 3 compensatory picks awarded to teams who lose quality free agents and do not replace them with free agents who previously played for another team. In 2020 the Packers lost Brian Bulaga, Blake Martinez and Kyler Fackrell. All three signed free agent contracts and played in 2020, although Bulaga missed multiple games with injuries.

The NFL draft selection process is purposely weighted against winning teams in favor of teams with losing records. This theoretically makes the job of Brian Gutekunst harder than that of Joe Douglass, GM of the Jets. But history demonstrates this simple method of attempted parity often fails.

In the 2021 NFL draft a quality offensive tackle has become a Packer priority. Rick Wagner’s Packer career is over and David Bakhtiari went from stalwart to unknown quantity with his major knee injury. Another developmental offensive tackle, a shut down corner, a defensive tackle and a speed wide receiver with good hands would be a nice start for the Packer holes that are obvious before free agency begins. Let’s look at some of the options at offensive tackle. 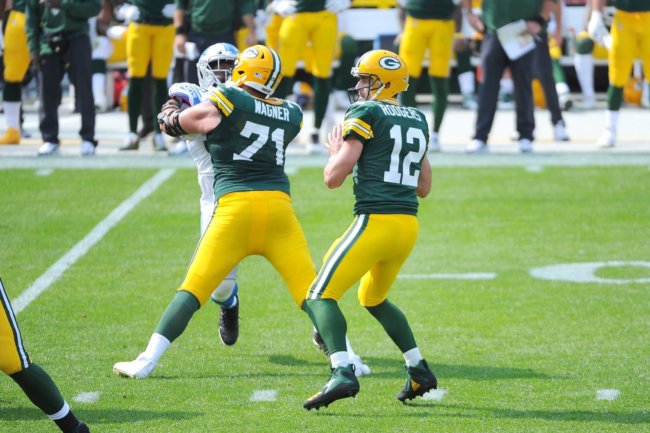 CBS sports currently ranks their top 150 players. While the NFL draft varies every year due to the number of compensatory picks awarded, in 2020, the 150th pick was the fourth pick of the fifth round. In that group there are twenty seven players listed as offensive lineman. A number of tackles are ranked too high for the Packers to reach. Those players include:

Slater is a player many Big Ten fans will recognize. To see his abilities you must review the tape of his play against OSU’s Chase Young. Slater completely neutralized Young, a great player, who was the NFL rookie of the year in 2020.

Players that the CBS Sports list predict will be available for the Packers at 29 include 5 college tackles:

CBS has Smith the highest ranked but he has buyer beware red flags. Smith started his college career at left tackle his freshman year. Then Smith had serious recurring health issues, blood clots in his lungs, that caused him to miss many games and practices. After his return to the team he was moved to guard. That said, he has the size to play tackle and had 19 starts at left tackle in the SEC. Smith has a total of 41 starts over his college career. Big Risk/Reward pick.

Mayfield has been projected to the Packers by a number of draft pundits. Mayfield has the size for the position at 6’5” and 320 lbs. He was a 4 star recruit from Grand Rapids Catholic High School who first committed to Minnesota, then changed to the Wolverines. Mayfield only played right tackle at Michigan and his tape is limited due to injuries and Covid. He should be labeled a high risk/reward first round pick.

Cosmi is 6’7” and just over 300 lbs. He started 34 college games in his career. He plays smart and for a man his size has quick feet. His tape is not all clean and in his sophomore year he could be beaten by speed. (See 2019 Texas v. LSU). He has improved since that game and the experience against quality competition gives him an opportunity in the NFL.

Jackson Carman was a highly recruited Ohio high school football player. He had offers from everyone. Carman stands 6’5” and 335 lbs. He has guarded Trevor Lawrence’s blind side for the past two years. There is plenty of tape on him against high quality college football players in big game situations. For the most part, he excelled. Carman received second team All-ACC recognition. His run blocking is better than his pass blocking at this point. Some pundits question his arm length and “functional length” but against Notre Dame he seemed fluid with his kick out and showed good quickness on a stunt that was not picked up by the guard. He was beaten to the inside on a play that looked like he was confused about his assignment. Pundits list him as a potential first or second round pick.

Alex Leatherwood had the pundits thinking of him as a top ten pick before the season but some poor reps at the Senior Bowl has some thinking his best position may be guard, where he started as a sophomore. As a junior he was named first team All-SEC at left tackle. In 2020 he started every game and gave up only two sacks. If Leatherwood is available, he would be tough to pass on.

Other notable tackles that are lower on the CBS list that would be available in early round 2 of the draft include:

Jackson comes from the Iowa NFL OT factory. He played left tackle at Iowa while NFL rookie stalwart, Tristan Wirf, played right tackle at Iowa. Jackson is a four year starter at left tackle. But scouts are not as enamored with Jackson, hence is potential availability to the Packers. His arms measured at 32 ½ inches at the Senior Bowl, further fueling pundits to cast him as a guard in the NFL.

James Hudson is listed on some boards as a top 5 OT prospect. He opened some eyes with good reps at Senior Bowl practices. Hudson transferred to Cincinnati from Michigan after a 2017 redshirt year and a backup right tackle with limited opportunities in 2018. He sat out most of 2019 after his hardship waiver was denied. Hudson’s starts are limited to the Bearcat’s 2020 season and his arm length maxes out at 33 inches. His technique is often described by pundits as, “raw”.

Radunz is from the NCAA Division 1 subdivision (formerly Division I-AA) but has some good tape against lesser competition. He won the Senior Bowl Practice Player of the Week award. His 2020 game tape is lacking because Covid limited the Bison’s games. Can one practice week make a first or second round pick? Radunz may be the answer, although his 2019 tape had many quality reps.

Eichenberg has anchored Notre Dame’s left side for three years. He has played against the best college football defensive players. He has not allowed a sack since early in the 2018 season. Sometimes he wins with style, sometimes he wins but looks ugly (See the Alabama game) but he continued to win; no sacks. His foot speed and nastiness have been questioned, but he has 3 years of reps and won multiple awards and honors for a reason. He’s earned them. He stands 6’8” and 302 lbs. He is already 23 years old. While CBS Sports thinks he will be available, other pundits think he may go as high as the middle of the first.

Walker Little may be the biggest mystery of the draft. He opted out of 2020 after missing 2019 with a significant knee injury. Expect him to drop.

Teven Jenkins has top tier strength and tape confirms his mauler reputation. Movement and footwork are questionable. There is tape (see Texas game) where he dominated potential first round pick Joseph Ossai. He may be a better guard than tackle.

Jones measured 6’5” and 319 lbs at the Senior Bowl. Despite winning most of his reps during the week pundits are already saying he is an NFL guard. He has 33 inch arms and a 79 inch wingspan. Any team that drafts him will try him at tackle first if they have a need.

There are also a couple of small school notables that are potential high picks. Spencer Brown from Northern Iowa has been ranked as high as the number seven tackle in the draft by some pundits. His is athletic, making kicks and second level transitions look smooth on tape. Brown is 6’8” with an 82 3/8 inch wingspan and hands that are 10 3/8 inches. Pro Football Network described his athletic ability as, “rare”. Brown also lost 2020 to Covid and his 2019 tape showed the need to improve angles and hand placement.

Finally, local prospect Quinn Meinerz created quite a buzz at the Senior Bowl with some dominating reps. The Wisconsin-Whitewater product was voted best lineman on his Senior Bowl squad. Meinerz is a guard/center, not a tackle prospect, but you have to love his workout video.

The good news for the Packers is that this draft has depth at the offensive tackle position. The bad news is a good percentage of potential picks have limited 2020 reps and will need time to develop into dependable NFL blind side protectors. Next up, Cornerbacks.