When Will This Team and Coach Convert the Non-believers?

While the Packers have the best fans in the NFL, 2020 was a strangely trying year for what we have come to call the Packer faithful.

I’m guessing that the coronavirus is a big factor in the pessimism that seems to have seeped into all our lives, and caused so many followers to doubt, fret, and worry about the team’s abilities and prospects. Here at Total Packers, as elsewhere, commenters have been unusually, and I think unreasonably, negative and hesitant to embrace our merry group of over-achievers.

On January 8, it will be two years since Mark Murphy’s announcement that Matt LaFleur would be the team’s new head coach. I’ve never had a trust problem with the young football genius. Though I recall most Packers fans responding with cautious optimism, many of the national pundits and sages panned the selection – maybe I’ll go back and dig up some of their quotes. They blew it.

In a post of 1/12/19 titled “Relax Fans, Those Who Know LaFleur Best Sing His Praises,” I said this:

“Oh my, have you seen how many of the Packers faithful, egged on by some skeptics in the mainstream media, are on edge over the Matt LaFleur hiring? Is the guy ready? Should we have picked someone with prior head coaching experience? Will Rodgers respect a guy who’s only four year older than himself?

Well, for all of the risk-adverse crowd out there, my advice is to relax: the Packers not only made the right choice, but they were damn lucky that such a rising talent as LaFleur was available.

. . .(After relating the high praise from Kyle Shanahan and Sean McVay) So, even if you are less than confident about the Packers’ current management triumvirate, you can take the glowing words of Shanahan and McVay to heart. They are currently among the smartest – and most successful – offensive minds in pro football. The two are intimately aware of [LaFleur’s] abilities, and they flat out love the guy!”

You’d think going from seasons of 7-9 and 6-9-1 to 13-3 in 2019 would have won over the LaFleur doubters. However, I still don’t feel our coach is getting his proper due. I suspect that he’s just too self-effacing and team-oriented to go preening and prancing around like a rooster. Among his many virtues, the man is modest to a fault. 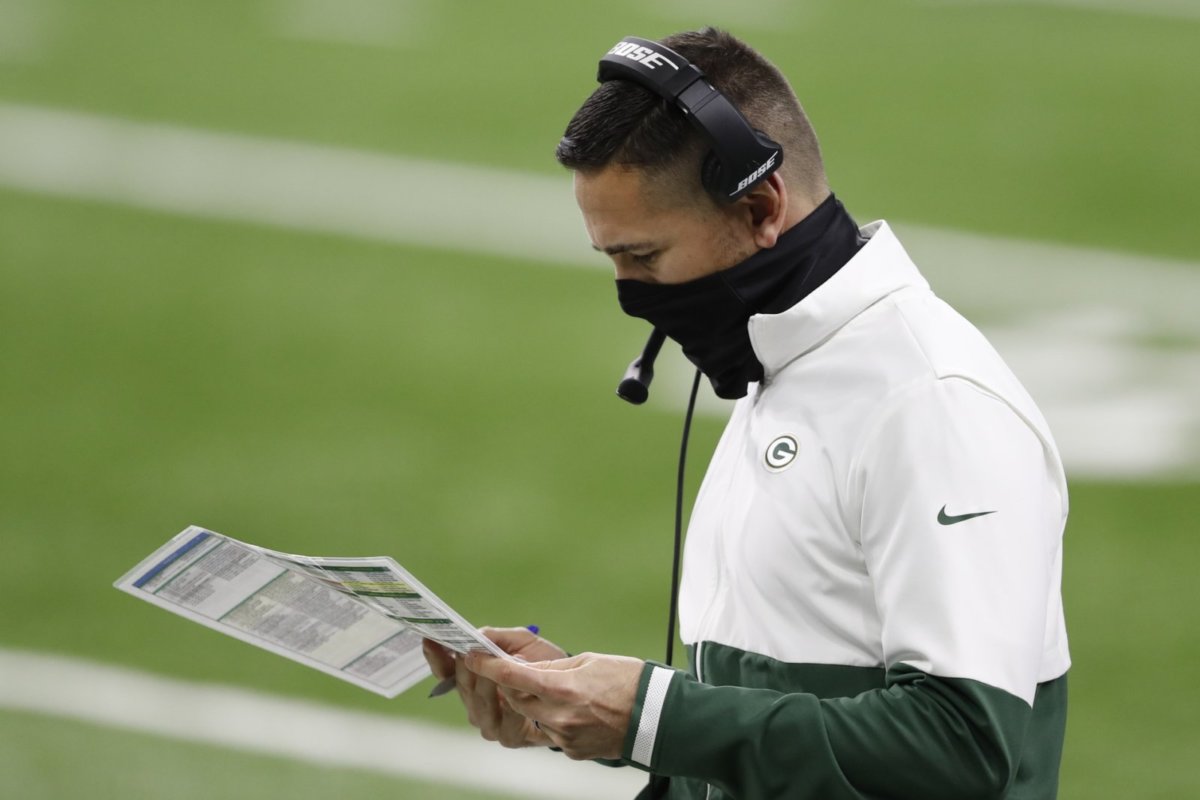 Though the Pack opened the current year with four wins, they were then clobbered by Tampa Bay and Tom Brady, by a 38 to 10 score, and there went much of the fan base’s budding confidence. With the 6-point loss to the Vikings on November 1, the team fell to 5-2. The team rang up a third defeat on November 22, though they gave good effort and would have prevailed over a sound Colts team except for four uncharacteristic turnovers. Many thought at this point, and with a 7-3 record, that the sky was falling down.

Since that time, it’s been all joy, as LaFleur’s charges have run off six straight wins, mostly by comfortable margins, to close out the regular season.

One indication that the team has greatly improved, despite having an identical record to the 2019 group, is the differences between points scored and points allowed. In 2019, the team scored 376 points (15th best), while giving up 313 (9th best), for a net positive difference of 63 points; this season, the team scored 509 points (tops in the NFL), while giving up 369 (13th best), for a positive margin of 140 points. Per game, that averages out to an 8.75 average winning margin, versus just a 3.94 point margin in 2019.

If I didn’t miss anyone, here’s how the six top teams line up in what I’ll call the “point spread” statistics: Saints 145; Packers 140; Buccaneers 137; Bills 126, Chiefs 111; Steelers 104. This statistic is informative in that it takes into account both a team’s offensive might and its defensive prowess. I had expected the Chiefs to be out in front, and the Saints to be about number four.

So, Packer fans, embrace the moment. Enjoy it. Revel in it. Your team is (now) a top-notch outfit, from the front office down through the equipment managers. They’ve produced a prime contender for the Lombardi Trophy – and it’s only been two years since the franchise was reeling in confusion, ineptitude, and mediocrity. Also, they are peaking at the right time.

The last thing fans and commentators should be doing right now is making comparisons with the team’s postseason results since they won it all after the 2010 season. We have different players, a different general manager, a different head coach, and an almost entirely different coaching staff –The McCarthy-Thompson years have no bearing whatsoever on the prospects of this LaFleur-Gutekunst organization.

By the way, it was LaFleur who selected all those assistant coaches and coordinators, and they seem to be doing a remarkable job at getting the most out of both the team’s stars as well as the role players. It’s just another example of how the head coach’s actions trickle down through the organization.

The second-last thing fans should try not to do is to draw comparisons to the 2019 squad. The current group is deeper, has more top talent, and is more experienced. I trust that they’ve also learned some lessons in those two defeats by the 49ers last season. This group is eminently better offensively, and is notably better defensively – two out of three ain’t bad.

What does have bearing is that the team’s leader, Matt LaFleur, has an .8125 win percentage as a head coach – and he’s learning more and getting better with each game. His players believe in him, and they’ve fully embraced his team-oriented approach, his game plans, his strategic thinking, and even his calm but confident demeanor. LaFleur soaks up information and observations like a sponge.

Yes, the makeup of the roster is every bit as critical as is the coach’s ability. But the two are closely related: Coach Matt is getting the most out of his players – he and his assistants have made any number of their players better than they ever would have been under the previous leadership. I’ll soon compile a list Green Bay players who have flourished, beyond all predictions, in the second year of Matt LaFleur’s reign. 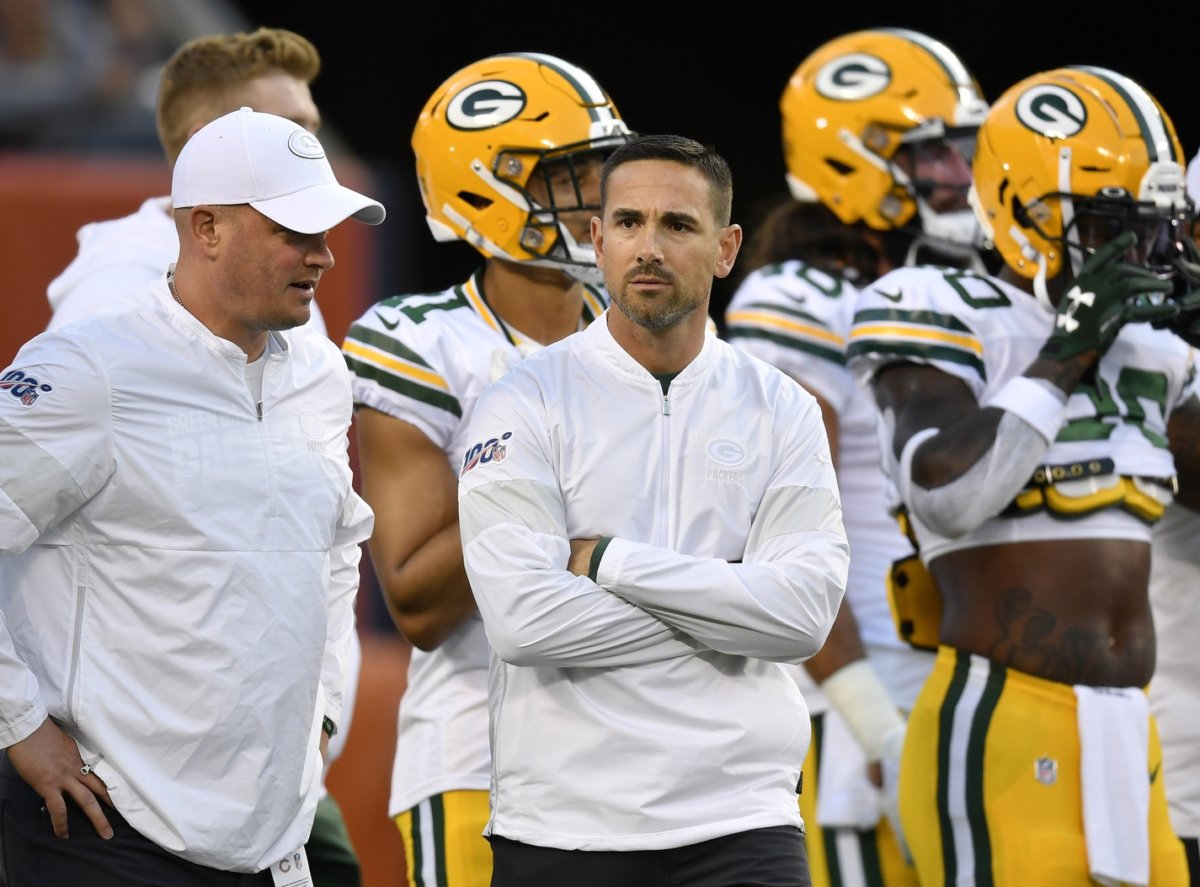 Comparisons with His Contemporaries

Since we’ve got two weeks before the Packers next take to the field (Lambeau Field!), there’s plenty of time to speculate whether, twenty years from now, LaFleur will have built up a lengthy history of continued excellence with this franchise, along the lines of: Bill Belichick (21 years at New England), Mike Tomlin (19 years at Pittsburgh), Sean Payton (15 years at New Orleans), Pete Carroll (11 years at Seattle), and Andy Reid (8 years at Kansas City).

It took Belichick nine seasons as a head coach, five with Cleveland, before he got to a cumulative record of more wins than losses. Tomlin had 12 losses by the time he won his 26th game. Sean Payton didn’t get his 26th win until early in his fourth season, by which time he had 23 losses. Pete Carroll didn’t get above .500 to stay until his seventh season and with his third team. Like Payton, Andy Reid also had lost 23 games by the time he notched his 26th win.

With his 26-6 start as a head coach, it’s hardly wild speculation that Matt LaFleur will one day be acknowledged to be in the ranks of the above group of outstanding NFL coaches. Let’s all hope that Matt and Green Bay have a successful and long-lasting relationship.

One thing is undeniable – this head coach has sure gotten off to a blazing start!

Previous Article
At Age 37, Rodgers Just Had One of the Best Seasons of His Career
Next Article
My Nomination for NFL Coach of the Year: Matthew LaFleur