Just like that, the 2020 season is over, and the 2021 off-season work and planning begins. We now have plenty of time to dissect what went wrong in the playoffs, and I’m sure that’s a conversation that will dribble on right up to the 2021 draft, which runs from April 29 through May 1.

Right now my mind is all mixed up: should I be dwelling on the game that just concluded or on what lies ahead for the organization. I’ll try to blend in both.

I know for sure that I’m proud of what our Packers accomplished this past season. The team confounded almost everyone’s expectations, the players got better with almost each ensuing game, and they entertained us with more offensive brilliance than we’ve seen since. . .whenever we last had a dominant offense. I suppose that would be 2011, when we led the league in scoring and finished third in offensive yardage.

There’s a very good reason why Green Bay fans should not be down over Sunday’s loss: they were playing an excellent – and I’m now convinced superior – team and organization. Bruce Arians is as seasoned, wily, and gutsy as head coaches come. By winning the Brady sweepstakes, the Bucs were able in one fell swoop to transform a roster that had been ho-hum from at least 2009 through 2019. During those 11 dark years, the Bucs won 62 games and lost 114, and they never finished better than third in their division, or played a postseason game.

By the way, one of my basic precepts of drafting is to use your first round choice (and second if possible) on a player who can start immediately – get full usage out of players while they are on a rookie contract. Tampa Bay does this. For example, tackle Tristan Wirfs played every offensive snap in this his first pro season.

These are the quality of players the Packers haven’t had a shot at since 2009, when B.J. Raji was chosen with the ninth overall pick. The Packers, along with a few other perennial contenders, have to try to overcome this stacked deck year after year.

Leading up to Sunday’s game, all the talk was about Tampa Bay’s inside linebackers: Devin White and Lavonte David. Both guys attained All Pro status (second-team) this season.

For once, all the talk was accurate – maybe even understated. All game long, the Packers struggled to gain yardage on the ground. It was actually worse than when the Packers got trounced by the Bucs in Week 6 – the Pack managed 4.2 yards per carry this time, but only had 13 carries for 67 yards, whereas before they gained 94 yards on 21 carries (4.5 average). On Sunday, White was a monster, as he registered 15 tackles (9 were solo) and recovered a fumble. I’d say that White was Sunday’s MVP.

Inside linebacker is arguably the position that calls for the most versatility: you’ve got to be able to fend off blockers and bring down rushers while also being able to provide pass coverage against wide receivers, tight ends, and running backs.

The Bucs have made the inside linebacker job a top priority – Devin White was a fifth overall pick in 2019 – a spot usually reserved for potential franchise quarterbacks. Devin was chosen ahead of the likes of quarterbacks Daniel Jones (#6), Josh Allen (#7), and Dwayne Haskins (#15).

Meanwhile, the Packers have for years treated the ILB positions as an afterthought. DC Mike Pettine doesn’t even believe in having two (true) ILBs on the field at the same time.

We can blame the Packers’ offensive game planners all day long, or we can accept the indisputable: the Bucs have the league’s best rushing defense – and by a goodly margin. In 2020 they gave up 1,289 rushing yards, or only 80.56 yards per game. They also completed the trifecta, by allowed a league-low 3.6 yards per carry, and the fewest rushing first downs, 78 (4.9 per game).

Yes, the Packers failed to establish a run game threat on Sunday, and that failure made it that much more difficult to have solid and steady passing production. But that’s a credit to Tampa Bay, more than a knock on Green Bay. 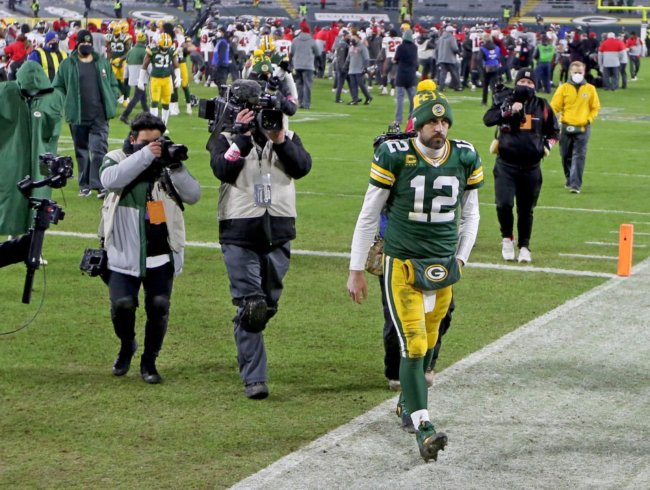 All week leading up to the game, the pundits, forecasters, and analysts were obsessed with looking for ways to exploit the other side’s weaknesses. While we were jabbering away, Bruce Arians and his staff apparently were focused on one Green Bay player. They eventually appeared to design their entire offensive game plan around getting receivers one-on-one against cornerback Kevin King.

It was no contest – and it was the big difference in the game. King was outmanned. He let people get deep on him, he played them soft – as he has all year. He’s too slow foot-wise, reaction-wise, and burst-wise. He’s also a crappy tackler. There’s only one reason he was out of the field on Sunday: his backups are even less athletic, less physical, and slower than he is. It will require a separate posting dedicated entirely to King to illustrate just how poorly he played – and how it came to pass that such a weak link was left unattended.

As I work on that next post, I’ll just conclude with the thought that every team has a weak link or two. Tampa Bay discovered Green Bay’s weak link, and exploited it to the max – even right up to the final two-minute mark.

With 1:46 to go, the Packers still had a slim chance to win this game: it was third and four for Tampa Bay at its own 37-yard line. What does Kevin do? He doesn’t just hold the receiver, he grabs onto his white undershirt and pulls it about two feet out from under his jersey. The refs didn’t even want to throw a flag at this juncture of the game, but King’s actions forced them to.

In the past, I said I thought that lining up off-sides was the stupidest thing a football player could do. I was wrong. Grabbing hold of and hanging onto another’s shirt tail is even dumber – not that King needed any more nasty adjectives to describe his deplorable play against the Bucs.

So, come April we’ll need to expend a high draft choice – once again – on a defensive back.