The NFL scheduling geniuses knew what they were doing when the penciled in the Packers and the Titans for a Week 16 Sunday night game at Lambeau. They probably figured that Green Bay would still be fighting it out with the Vikings for tops in the NFC North division. Plus, a national audience would undoubtedly like to see a leading contender for league MVP stack up those rushing yards. Finally, with a little luck Lambeau Field might take on the look of a snow globe just two days after Christmas.

The league’s wishes mostly came true, though not exactly as the schedulers planned. Yes the game had playoff implications, but it was for the top playoff seeding in the NFC. And yes, TV viewers got to see an MVP candidate at the top of his game – but it was a guy wearing green and gold, not red and blue. They nailed it, though, about the snow, which came down fairly heavily for most of the matchup/mismatch.

By the time the sky cleared as the game ended, several things had became crystal clear. Green Bay put NFL fandom on notice: they made an unmistakable statement. The Packers no longer have a roster full of holes. They are as talent-laden as any team in the league. They are no longer defenseless. Green Bay is a legitimate contender, not a pretender, for capturing the Lombardi Trophy. 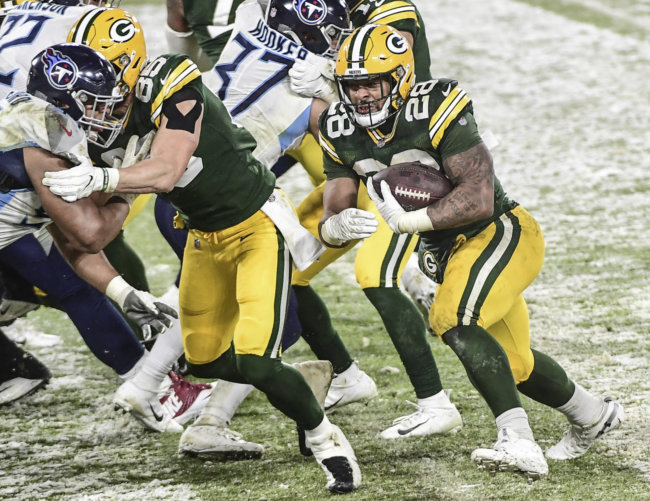 The biggest shocker on Sunday was that Derrick Henry was the third best running back on the field.

From the moment GM Brian Gutekunst selected AJ Dillon, the huge running back and second-round draft pick from Boston College, fans have been intrigued by what he might bring to the team. However, due to some pesky injuries, and having to spend more than five weeks on reserve/COVID-19 status, Dillon had to wait until Week 16 before making more than token appearances in the backfield. It was worth the wait.

Dillon wasted little time showing us all what he’s capable of. With Aaron Jones suffering a minor injury in the second quarter, he had this big stage mostly to himself for the rest of the game. By the time the flurries had abated, AJ had churned out 124 yards in 21 carries, including his first two NFL touchdowns.

Dillon easily outshone Henry, who managed only 98 yards in 23 carries. While Dillon averaged 5.9 yards, Henry was held to an average of 4.3. As a team, the Packers rushed for 234 yards, nearly 80 more than the Titans. Nor should we (ever) overlook Aaron Jones, whose ten rushes produced 94 yards – just another day at the office for the first-time Pro Bowler.

Dillon’s power, speed, and agility were on full display throughout the one-sided affair.

Midway through the second quarter Dillon had to reach down and behind him to corral a sinking pass from Rodgers. Given the field conditions, it was a display of supple hands – a good omen since he was seldom used as a receiver during his three years of college. By the end of the first half, Dillon already had picked up 51 yards on ten carries.

When the Titans closed to within five points in the third quarter, the Packers responded by looking to their husky rookie often the rest of the way. Facing a fourth and one with 3:42 left in Quarter 3, Dillon made a nice cut behind a couple of fine blocks, and rambled 30 yards for his first NFL touchdown.

LaFleur also put Dillon’s power to good use. Example 1: with 11:28 left in Quarter 2, and facing an important third and three from the Tennessee 13, LaFleur sent Dillon smack up the middle. Aided by fine blocking, Dillon easily gobbled up six yards. Example 2: with 2:30 left in the game, and the Pack at the Titan’s seven yard line, Dillon was again sent straight up the gut, where he dragged three Titans as he crossed the goal line. These are plays that Jones or Jamaal Williams would not have been able to convert.

Aided greatly by Dillon, the Pack finished the day converting on four of eight third downs, and on four of five trips to the Red Zone.

Some very successful NFL teams have featured running back tandems consisting of a power runner alongside a finesse runner. The quintessential such pairing was of course the Packers’ Paul Hornung and Jim Taylor back in the Lombardi era, and they were quickly followed up by Donnie Anderson and Jim Grabowski. In the late sixties and early seventies, Miami fullback Larry Csonka and halfback Jim Kiick became known as “Butch Cassidy and the Sundance Kid.”

Though the Packers might not be able to re-sign Aaron Jones at the end of this season, it’s now likely that Jones and the team’s new rushing sensation will share the running back duties for up to four more games. The ascendancy of Dillon will make it very difficult for defenses to game plan for two running backs whose styles are so different. This is quite an addition to what is already among the league’s top offenses. 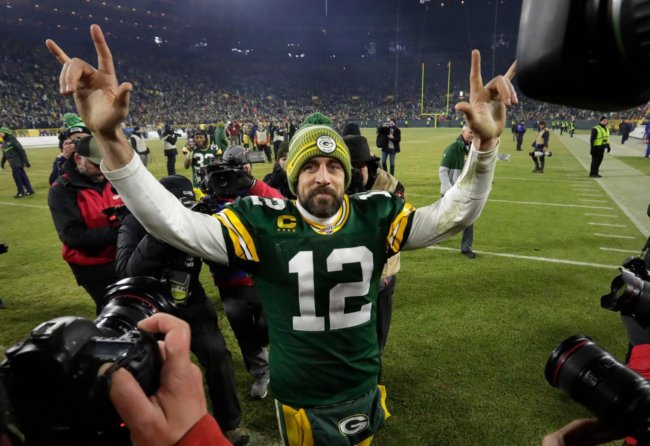 With his passer rating of 128.1 against the Titans, Aaron Rodgers has now opened up a gap of more than 11 points (119.4 to 108.2) versus MVP contender Patrick Mahomes (who rated only 79.5 against the Falcons). Aaron’s closest passer rating pursuer is now the Texans’ Deshaun Watson, at 112.1. This award is announced at the end of the regular season.

Congrats to Aaron Jones, who went over the 1,000 yard mark on Sunday despite missing two games on the season. He’s averaging 5.6 yards per carry, which is tops among qualifying running backs; those trailing him include: Nick Chubb (5.4), Derrick Henry (5.2), and Raheem Mostert, Dalvin Cook, and Alvin Kamara (all at 5.0).

Davante Adams is now averaging 102.2 receiving yards per game (he’s missed two games). His closest pursuers are Calvin Ridley and Travis Kelce, at 94.4 each. In total yardage on the season, Davante’s 1,328 yards trails only Kelce and DeAndre Hopkins.

On to Chicago, then on to the playoffs!