If this was a playoff test, the Packers passed it with high grades. Aaron Rodgers tossed 4 touchdown passes to 1 interception, repeatedly finding Davante Adams. Adams caught 3 of Rodger’s four TD throws and made some spectacular catches that only he can make look routine. Adams totaled 11 catches on the night. The first Packer touchdown was caught by Equanimeous St. Brown, one of eight receivers who caught a pass from Rodgers on a snowy night game at Lambeau Field.

Last week Packer fans, and this writer, questioned why A.J. Dillion was only given one carry against the Panthers. It was a question that boiled over from limited carries this season. In the 14 games prior to Sunday’s, Dillion had a total of 24 rushing attempts. Only twice had Dillon been given 5 carries in a game. Was he a player worth a second round pick? While the RB room is deep with veterans, fans wanted to see what the former Boston College star could do. On this snowy December night, A.J. Dillon was given his first extended opportunity to prove himself. In 21 carries, the 247 pound bruiser had Packer fans virtually high fiving their friends as they watched him bash the Titan defense for 124 yards and two touchdowns. To put his game in perspective, he outplayed MVP candidate Derrick Henry on the same field. His only stumble was an awkward Lambeau Leap. Teammates to the end, Allen Lazard gave him a nice boost for his second attempt. 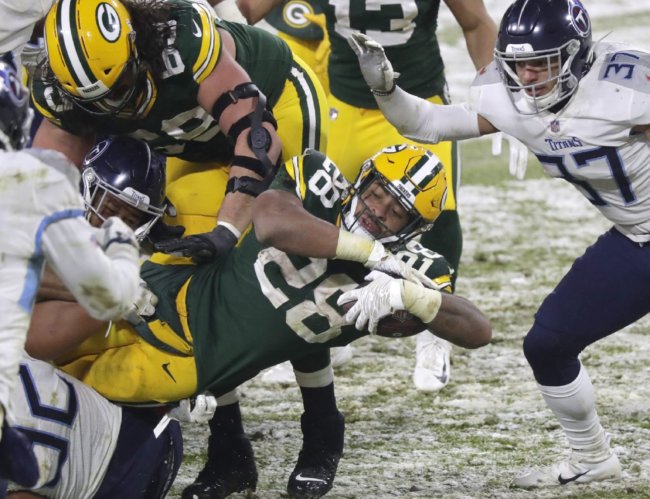 Mike Pettine dialed up a new-look defense to force Tennessee out of their game-plan. At times the Packers lined up six defenders on the defensive line, almost daring Ryan Tannehill, the number one rated statistical quarterback according to NBC game broadcast, to pass. Tannehill did not produce a good stat line Sunday night. He was repeatedly hounded by Packer defenders. The Smith brothers and their prodigy, Rashan Gary, harassed Tannehill into 2 interceptions and one fumble. Darnell Savage had another good game, totaling 5 tackles, 3 passes defensed, an interception and a dropped pick that could have been a pick six. Jaire Alexander also excelled in coverage.

It was a night where the offense and defense played well enough to overcome special team errors. Even though the field goal block was nullified by a seemingly phantom off-side penalty, the tape is there for playoff teams to review and try to exploit. Fix it now, not in January.

Packers fans must be happy with the message this victory sends to potential playoff teams looking to prepare for the Packers. Rodgers and company have the weather figured out and Lambeau will be another tough obstacle. But to guarantee that future, the Packers must win next week. Up next, Da’ Bears.

Happy Holidays to all.