If you saw the first three Packer touchdowns, the last two shoehorned between the dramatic defensive goal line takeaway initiated by rookie Krys Barnes, you probably thought the game was over right then and there. How many teams can come back from that type of dramatic fail down three scores at halftime? Against the NFL’s most prolific offense? With the Packers receiving the second half kickoff? If you turned the game off after that third score you saved yourself some stressful moments, but in the end missed a repeat performance any Packer fan wants to see; a fantastic 51 yard Mason Crosby field goal late in the 4th quarter which put the game out of reach.

The Packers were at their offensive best early. Rodgers directed long drives, turning them into a passing TD and a Rodgers scramble running TD. Aaron Jones had a good statistical day, and breezed in with a mocking high step for the Packers third TD in the first half. The defense seemed to rise to the occasion with a quick forced punt on the Panthers first possession and a goal line stand for the ages. Rookie Krys Barnes, the undrafted rookie free agent, made the play of the game when he knocked the ball out of QB Teddy Bridgewater’s hands as he tried to lift the ball above his head and over the goal line. That play created a 14 point swing and cost the Panthers the victory. After Green Bay’s third score the game seemed reminiscent of a number of last year’s games where the offense had a good game plan, scored early, but could not adjust after halftime and stalled out, creating uncomfortably close games for fans. 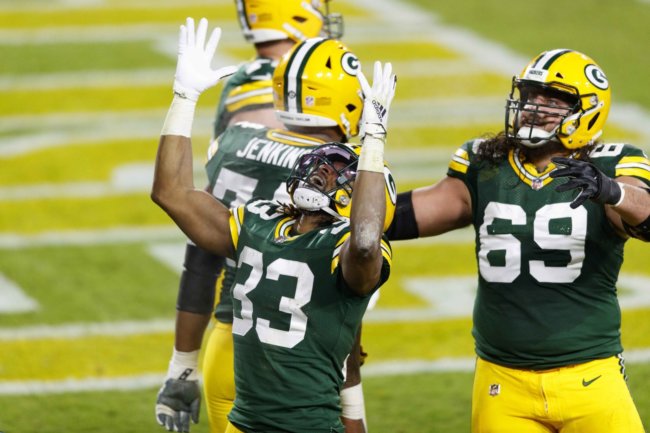 Aaron Jones ended the game with 145 yards on 20 carries, but in the second half the Panther defense made him work for every inch. After Jamaal Williams left the game with an injury, Jones went the rest of the way, except for one 18 yard run by A.J. Dillon. Where was Dillon the rest of the game? Packer fans want an answer.

The offense scored 24 points Saturday night on a 32 degree December evening described as “Balmy” by Larry McCarren. The defense held the Panthers to 16 points. On paper this reads like a solid win, but the game was closer than the score indicates and Carolina seemed to have the momentum for the entire second half. The defense gave up just over 360 yards but much of that was due to repeated opportunities for Carolina thanks to the Packer’s offensive failure to get second half first downs. In total, the Packers had 5 drives of four plays or less. The only Packer points in the second half came on the aforementioned 51 yard Crosby field goal. After multiple games of clean pockets and passes coming out quickly, Rodgers and company could not solve the puzzle of the Panthers defense. Lucas Patrick was beaten multiple times. His toe injury is obviously affecting his performance and the Packers need to design a game plan giving him help in passing downs. Bakhtiari, the iron man of our offensive line, seemed to also struggle. The final tally, 5 sacks, matching their season high against Tampa Bay.

On the other side of the field, the Panthers had a good plan for the second half: Run on the Packers Nickel defense and use the run to set up the pass. In the air, attack Kevin King repeatedly. King and Kirksey seemed to be behind and a step slow on repeated completions, especially between the hash marks. 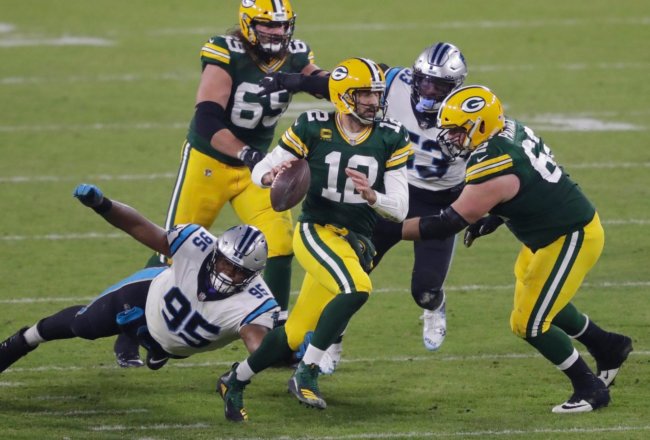 On offense, Aaron Rodgers seemed stubbornly set on repeatedly throwing quick hitch passes to Davante Adams although they failed repeatedly. While crossers seemed to be open, Rodgers repeatedly settled for check down throws that would require a missed tackle by the Panthers to gain yards. But the Panthers’ tackles were consistently sound, repeatedly foiling Packer drives. While Rodgers was visibly upset in the second half and seemed to be blaming his receivers, he also missed a few opportunities. Valdes-Scantling had a half a step on one of his only targets but more importantly, had the outside position and three yards between him and the boundary. If Rodgers had placed the ball over his right shoulder, 5’11” defender Myles Hartsfield would have had no chance. Instead, Rodgers threw the ball to the inside and the ball came close to being picked. On another play Rodgers did not see Aaron Jones leak into the end zone wide open. Rodgers was focused on Davante Adams who was covered, forcing a throw away incompletion. On another incompletion Rodgers failed to connect with a wide open Adams who was over 15 yards downfield.

Give credit where it is due. Packer fans have to applaud the efforts of Adrian Amos Saturday night. Though he did not have an interception, he may have played his best overall game as a Packer. Amos made play after play forcing incompletions or making a sure tackle to help thwart a Panther drive. Crosby’s long distance heroics in back to back games led the special teams which had sound coverage on dangerous return men. The result: the Packers keep their lead in the NFC and the offense and defense can watch the film and improve from this performance which was played against a good defense. Next up, The Titans.

Previous Article
Game Day – Week 15: Packers vs Pathers
Next Article
When Aaron Was Off, the Other Aaron Came to the Rescue