When Aaron Was Off, the Other Aaron Came to the Rescue

With the Packers’ gritty win over the Lions a week ago, everything changed: Green Bay gained control over their postseason destiny. The goal – no, the target, the very focus – from that point forward has been, and remains: to preserve that hard-won inside track to the #1 NFC playoffs seed. With that distinction comes a bye week and home field advantage throughout the conference playoffs.

The team’s target over these last two games is: W’s. WINS. Style points don’t matter at this stage of the campaign. Say what you will about Saturday’s sloppy performance, the LaFleur-led Packers demonstrated once again that they know how to stack up wins. They just captured their fourth in a row, and this fine young head coach has now accumulated 24 wins in just 30 outings. It wasn’t pretty, but the essential mission was accomplished on Saturday night. 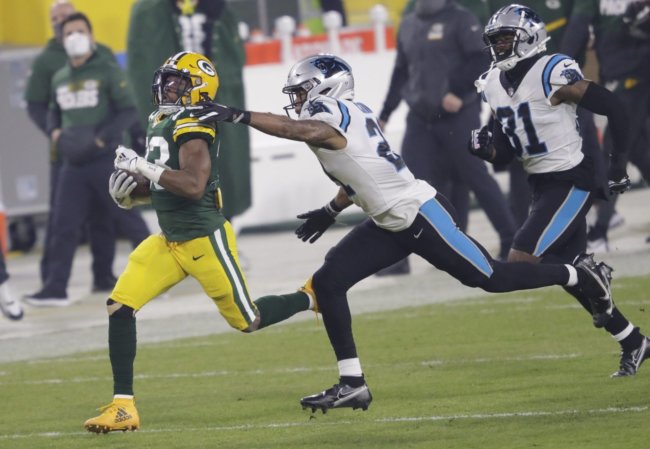 Give that first pigskin to that consummate professional, that former round-six draft choice: Mason Crosby. Just six days ago, it was Crosby who preserved the win against Detroit with a 57-yard kick with just 3:30 left in the game. On Saturday, and with temperatures not conducive to long placekicks, he repeated his clutch play – this time from 51 yards with 3:39 remaining.

Rendering Crosby’s field goal especially heroic was his erasure of a big blunder by Aaron Rodgers. Moments before, Green Bay faced a third and six from the Carolina 25 yard line, but Aaron suffered a sack and an eight yard loss – turning a routine field goal attempt into an iffy proposition.

if my memory serves, over the past two years Aaron has suffered third-down sacks which moved the team out of field goal range, or to the very edge, from three to five times. These are inexcusable errors for such a seasoned quarterback – he’s needs to be reminded by the coaches of the importance of field position in such third-down situations.

A second game ball should go to Aaron Jones. Coach LaFleur had been giving Jamaal Williams over a third of the carries (between the two) all year long (41.4% to be precise), but Jamaal Williams was injured after just one carry, allowing Jones to assume his rightful role as the team’s predominant and preferred running back. Aaron proceeded to get his highest number of carries on the year, 20, and he turned them into 145 yards.

That’s two yards more than what Rodgers got through the air. Subtract the lost yardage on the Pack’s five sacks, and the pass game netted only 96 yards. Jones saved the day!

Jones earned every yard, breaking tackles for extra yardage all night long and keeping the ball secure while absorbing gobs of violent hits.

Despite taking lots of abuse, Jones hasn’t lost a fumble all year long. That’s in contrast to many other star ball carriers, such as Ezekiel Elliott (4 lost fumbles), Dalvin Cook and Josh Jacobs (2), and Derrick Henry and Nick Chubb (1).

Despite his lack of carriers, with two games to go Jones now sits just 32 yards shy of another 1,000-yard rushing season. After averaging 7.2 yards per run against the Panthers, he’s upped his season average to 5.4.

It was this other Aaron who came to the rescue when quarterback Aaron had one of his two poor outings on the season.

I write this just after the finish of the Titans-Lions game. I imagine many Packer fans were also following what was happening in Nashville.

On the season, Henry has now rushed for 1,679 yards in 311 carries. He’s averaging 5.4 yards per carry, and he has 15 rushing touchdowns. Having gained only 112 yards through the air on the season, at least he’s not much of a receiving threat.

Henry is far and away the league’s running back workhorse this season. Going into Sunday, Derrick had carried the ball 297 times, while only one other running back, Dalvin Cook, had more than 225 carries. Commentator Stephen Smith (nobody’s favorite?) thinks the MVP race should be between Patrick Mahomes and Henry.

Fans of AJ Dillon take note: it took Henry until his third year in the league to become a regular starter. Dillon has seen only token action with Green Bay to date, in large part because he was on the reserve/COVID-19 list from November 2 until December 10.

In his lone carry on Saturday, however, Dillon generated some excitement with an 18-yard burst through a hole created by left tackle David Bakhtiari – and he was only a shoestring tackle from going a lot further. I’m guessing we’ll see a bit more of Dillon against the Titans.

The Packers relaxed and lost their focus against the Panthers. It’s even pretty clear when that happened: midway through the second quarter, when QB Teddy Bridgewater fumbled away the ball within a yard of the end zone. It might have been better for the Packers had he scored, as Green Bay might not have concluded the game was going to be a laugher.

I’m looking for the Packers to be highly motivated, all game long, against the Titans. It should be very fresh in their minds that if they let up next Sunday Henry will be looking at 200+ yards on the ground. In fact, he might do so even without any glaring lapses by Green Bay. It’s a mark he’s exceeded twice this year, most recently against the Jags on December 13.