On October 27, I did a post on the biggest reason the Packers are an improved team in Matt LaFleur’s second year as head coach. Though I listed four possibilities, I decided the predominant improvement was having more depth throughout the roster.

After our quarterback’s nearly flawless game against the 49ers, however, I’m going to switch to my first runner-up: “that Aaron Rodgers has resurrected his game.” 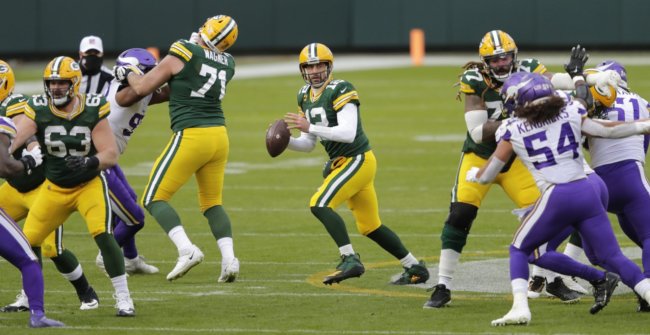 This comparison overlooks a number of things. For one, Rodgers was rested by sitting out the final regular season game of 2011. The biggest difference by far, however, is that ten years ago Rodgers had Jordy Nelson, Greg Jennings, James Jones, Randall Cobb, Donald Driver, Jermichael Finley, Ryan Grant, and James Starks to throw to. Taking that into account, I’d opine that Rodgers is personally having the best year ever.

Apportioning the defensive snaps. I have to assume that defensive coordinator Mike Pettine feels he has a lot of players of roughly equal ability (some might say inability). Against the Niners, he handed out the defensive line snaps as follows: Kingsley Keke 33, Kenny Clark 31, Montravious Adams 26, Dean Lowry 25, and Tyler Lancaster 22. – Clark was presumably not yet back at full strength.

He did much the same with the OLBs: Preston Smith 35, Za’Darius Smith 32, Rashan Gary 24, Randy Ramsey 16, and Jonathan Garvin 14. Some of the sharing had to do with it being the second game in five days; still, it’s a vote of confidence in Gary, Ramsey, and Garvin. We’ll need a strong showing by Rashan in the playoffs.

The ILB duties are also being widely shared. Oren Burks and Ty Summers each got 34 defensive snaps, while starter Krys Burks, who left the game with an injury, had 24. Filling in at cornerback for first-stringers Alexander and King were: Josh Jackson (56 snaps), Chandon Sullivan (35), Ka”Dar Hollman (26), and Stanford Samuels (13). That’s an indication of confidence in Jackson – another guy who could give the team a boost come January. I must admit I had forgotten Hollman, a sixth-round choice in 2019, was even on the team.

The opportunities for playing time being given to the second- and third-stringers are going to pay dividends as injuries continue to take their toll as the season progresses.

The other Aaron. The stats of Aaron Jones on the season are vexing. Just returned after missing Weeks 7 and 8, Aaron has had but one solid game out of six on the year – in Week 2, he ran up 236 yards, including 168 on the ground in just 18 carries. His next best rushing mark is 71 yards, and he’s yet to average five yards per rush in these other games. He also continues to be under-utilized in the passing game – most of his targets have been dump-offs, rather than planned plays. 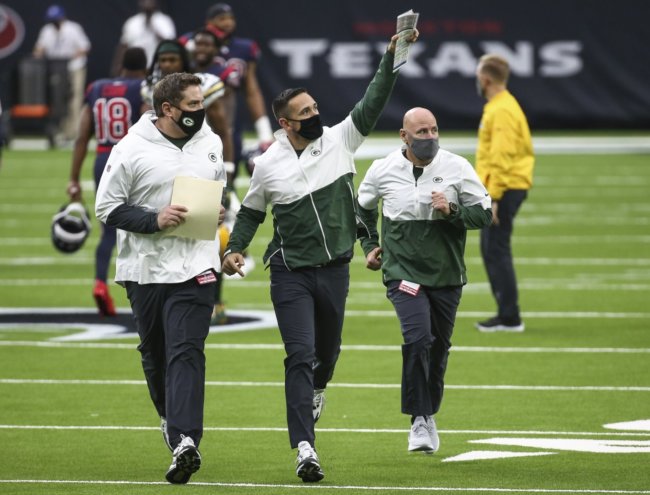 I put the majority of the blame on play caller LaFleur. As I’ve previously said, Jones should be sent outside the tackles on about one out of every three rushes. He’s a finesse runner, not a power runner, so he needs to be put in open spaces to do his thing. Open spaces exist outside of the tackles, not up the gut. Instead, LaFleur keeps sending him straight into the muddle in the middle.

He also needs to hit the holes quickly, before the defenders break loose of the blockers. Instead, LaFleur likes to use an I-formation, which starts Aaron out eight yards back of the line of scrimmage.

Finally, LaFleur isn’t using as much deception, misdirection, or options as he should on the team’s run calls. What’s with all the guys going in motion all game long but never getting the ball?

Sorry, but I’m back to what I’ve been saying for over three years: the talents of Aaron Jones are being squandered. Currently, Jones is getting a loss or a gain of no more than a yard on about every other carry. Those plays need to be ripped out of the play book.

Prevent defenses. I think many fans will agree: to me, a prevent defense means allowing the opposing team to quickly cover the length of the field and score a TD in a couple of minutes or less. More often than not, the Pack has been dominating the adversary, especially on defense, when the “prevent” tactic is employed. The predictable result is that the defense starts willingly giving up lots of easy yardage, with the additional result being that the offense also goes into its own prevent mode – by resorting almost exclusively to predictable runs up the middle. This unsurprisingly results in a series of three-and-outs.

More than anything, though, what prevent defenses accomplish is switching the momentum and control that a team had worked hard to achieve back over to the other guys. There’s a time and place for prevent defenses, but in my opinion the Packers highly overuse the tactic. The best way to prevent a comeback by the other team is for the offense to maintain control of the ball – and the clock.