Everybody – yes, every Packer fan – knows the Packers are weak against the run. It’s been that way for years. The Pack ranked 17th in yards given up per game in 2017; they ranked 22nd in 2018; and last year they ranked 23rd. To date this year, they rank 15th, but are falling rapidly. You can’t be a serious postseason Super Bowl contender while having these percentages.

Everybody knew Blake Martinez would be leaving the Packers prior to the 2020 season. Given that the Packers use a 3-4 alignment, an enormous amount of the run-stop responsibilities fall to the inside linebackers. As I mentioned last week, through Week 7 Martinez, now in his prime and with the Giants, was ranked sixth best by Pro Football Focus out of 81 linebackers. It was incumbent that the Packers fill that large hole for 2020, but they did not.

Everybody knows that defensive coordinator Mike Pettine is insistent on playing only one true inside linebacker on most plays, and using a defensive back instead of a second ILB. Such usage all but guarantees that Green Bay is going to be susceptible to offenses with strong run attacks.

Everybody knows that the Vikings have a strong run attack, and one of the league’s top RBs. Dalvin Cook was a two-time first-team All American at Florida State. He was a Pro Bowler last season. In his fourth NFL season, he’s nearing the peak of his abilities. Going into Sunday’s game, he had the league’s second highest rushing yardage.

Cook was unstoppable on Sunday: 30 carries, 163 yards, 5.3 yard average, four touchdowns. Add in his two catches for 63 yards and he went and you’ve got a 226-yard 4-touchdown (one through the air) performance. Everybody knew this was a possible scenario. Coach Mike Zimmer obviously based his game plan on the Vikings’ run game crushing the Pack’s suspect defense.

Minnesota ran the ball 34 times, but attempted only 14 passes. The rest of the league will take notice. Unless the Packers can shore up its run defense, we can count on many more run-heavy game plans in the final nine games.

The question that is begged is: why has Green Bay done so little, especially over the past three years to strengthen its run defense? 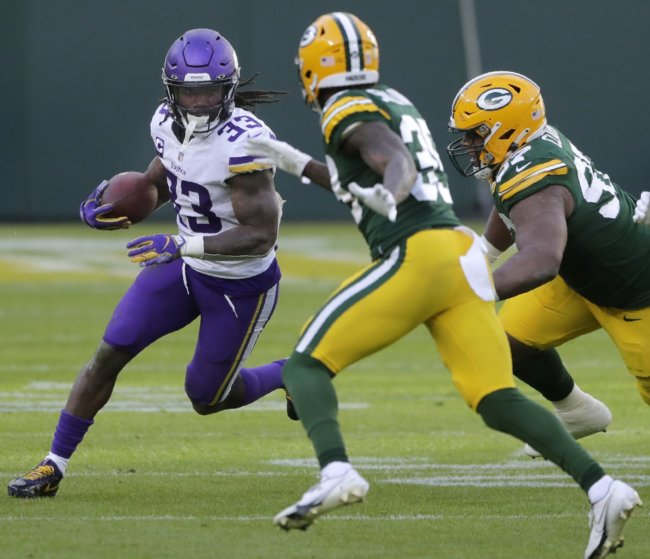 Brian Gutekunst was selected by Mark Murphy as the team’s general manager, replacing Ted Thompson, in January 2018. It has been his responsibility since then to acquire the personnel who will improve the Pack’s run defense. Everybody should agree that he has abjectly failed at this assignment.

In the 2018 draft, Green Bay was in a healthy position: they had 11 picks, and seven of them in the first five rounds. Gutekunst did select an ILB, and in fact he traded up to get Oren Burks in round three, with the 88th overall choice.

Gutekunst’s first two draft choices in 2018 were both cornerbacks. The only other defensive help he got in his first draft ever as GM was to nab two defenders in the seventh round to no one’s surprise DE James Looney and OLB Kendall Donnerson made no impact whatsoever on the team. You might recall that Green Bay even tried to convert Looney into a tight end.

Now in his third season, Burks has been a colossal disappointment. After starting four games as a rookie, he has not started a game since. He has a total of only 32 tackles, and no sacks, no QB hits, and no tackles for losses. He’s had but eight tackles so far this season.

In fact, it came as a shock to the rest of the league when Burks was chosen, as no other team seemed to think he was more than a mid- to late-round prospect. Gutey took a real gamble on Burks, and it’s a mistake the Packers are still living with three years later. And let’s not forget that the Packers traded their fourth (101st overall pick) and fifth round (147th overall) picks to move up to get Burks.

In 2019, and still faced with the need for run-stopping ILBs, Gutey selected five defenders with his eight choices, though once again he skipped over ILBs. Top pick Rashan Gary was viewed more as a pass rusher than a run stopper. Fifth-round pick Kingsley Keke is a defensive lineman, not a linebacker. Ty Summers has actually seen some action at ILB, but that was due to an injury to Christian Kirksey. His play has been about what one would expect of a seventh-rounder.

In the team’s most recent draft, almost everyone expected that the GM would expend one of its high choices on a run-stopping ILB to replace Martinez – but we were all mistaken. Gutey did draft a linebacker, but he waited until the fifth round to settle for Kamal Martin with the 175th overall pick. While Kamal has played little due to injuries, he’s shown some promise. Still, he was never expected to be a key component of the Pack’s 2020 defense.

Instead of drafting a high-quality linebacker, Gutey went to the free agency market, and signed up Christian Kirksey, who had been with the Browns for his first six seasons. Both Kirksey’s record there and the terms of his contract ($13M for two years) with Green Bay indicate he’s a mid-range talent at best.

Seven games into the season, Christian has missed the last four of them due to a pectoral injury, and he remains on injured reserve. This was hardly unexpected, as Kirksey only played in nine games total in 2018 and 2019. As I indicated last week, in the games he has played, Pro Football Focus gave him a 31.9 rating, food for 77th place out of 81 NFL ILBs.

In the absence of Martinez and Kirksey, Mike Pettine has tried a variety of unacclaimed guys – many of them defensive backs, not linebackers, including (defensive snaps on the season in parentheses): Chandon Sullivan (247), Krys Barnes (217), Josh Jackson (212), Will Redmond (200), Ty Summers (136), Raven Greene (134), Kamal Martin (71), and Oren Burks (46). Barnes, an undrafted guy out of UCLA, has been the best of the lot at stopping the run. Just think of where the team would be without his modest, but unexpected, contributions.

To try to harness Cook against the Vikes, Pettine principally used three linebackers: Krys Barnes (49 snaps), Kamal Martin (42); and Oren Burks, (9). Martin with three tackles, but also with several rookie miscues, was the only one who looked like he belonged on the field. Pettine’s ILB-by-committee approach allowed Dalvin Cook to have his best day ever in his fourth year as a pro.

As everyone saw, it was the Packers’ team-wide inability to get off blocks, fill the gaps, and tackle Cook that spelled defeat on Sunday.

Maybe Martin, Jackson, and/or Barnes will eventually emerge as a capable NFL linebacker. For the rest of this season, however, the Packers are going to give up a ton of rushing yardage simply because they lack players who have subnstantial ability to stop the run. But didn’t everyone expect that to be the case – with the possible exception of Brian Gutekunst – when this season got underway?

On Thursday, the Packers might face similar danger when they take on the 49ers. Everyone, including all of the Packers’ remaining opponents, is now fully aware that our team has a dearth of competent ILBs. One can go further: this simply is not a good tackling team across the board – an item that should figure into Green Bay’s decision to retain or release Mike Pettine at season’s end.

Despite all of their problems, Green Bay has some reason for optimism come Thursday: the 49ers are going through a plague of injuries. RB Raheem Mostert, who performed in Cook-like fashion in last year’s playoff trouncing of the Packers, went on injured reserve on October 24. RB Tevin Coleman, who had just returned last weekend after a month off due to an MCL injury, lasted only three runs against the Seahawks before being removed – I imagine he’s questionable at best against the Packers.

Next up, Jeff Wilson Jr., went down in the 49ers win against the Patriots on October 26, and is expected to miss several weeks. I’m not sure what the status of RB Jerick McKinnon is – he missed all of the 2018 and 2019 seasons, and he had only three rushes (for minus yardage) last weekend. McKinnon is yet another short but speedy (4.41) 49er rusher.

It looks like the 49ers will have to start JaMycal Hasty at running back. After going undrafted last April, Hasty recently moved up from the 49ers practice squad. He has the unusual 49ers’ RB distinction of not being blazing fast – his Combine 40-yard dash speed was 4.55 seconds. Hasty rushed 12 times, but for only 29 yards, in last Sunday’s loss.

In addition to their running back attrition, the 49ers should be without some other very recognizable names on Thursday: QB Jimmy Garoppolo, TE George Kittle, and WR Deebo Samuel.