The Green Bay Packers rode into Tampa Bay on an offensive train that some said could not be stopped. The offense was the first to go four straight games to open a season scoring at least 30 points a game without a turnover. Their offense has scored on every opening drive in 2020.

Their offensive dominance continued in the first quarter. The Packers led 10-0 at the end of the opening quarter. The Packers had two scoring drives, 21 total plays 10 points and just over 12 minutes in time of possession. Call it the shoe dropping, call it the bottom falling out, or just call it getting out played, Aaron Rogers gave up the equivalent of two pick sixes in the next 4 offensive plays from scrimmage and the Packers had no answer from there. The Packers defense gave up 24 unanswered points without a sniff at a turnover after the fourteen point gifts by Rogers and the offense 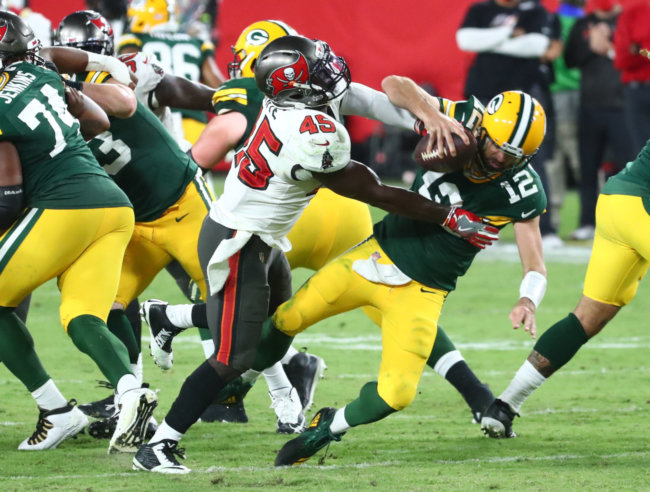 The interceptions both came with Rogers forcing throws to Davante Adams. The game had a strange similarity to the 2019 return of Adams from injury where the Packers were dominated by the Los Angeles Chargers — 26-11.

This is a game where Rogers needs to own his failure. For all his immense talent and leadership skills, he has been criticized in the past for not owning his own human failures. LaFleur stepped to the microphone after the game and admitted he was out coached. He also said the team had a lacking effort in practice and it showed on the playing field. What showed on the field was the offensive line being manhandled for three quarters. A few of Rick Wagner’s run block attempts while replacing the injured All Pro David Bakhtiari were complete missed assignments, blowing up the play. Outside of defensive rookie, Krys Barnes, making a few of the toughest tackles Packer fans have seen from an ILB in years, there were few defensive highlights after the first quarter. The Packer’s pass rush was non existent.

No one expected this team to go undefeated. But it is shocking to see the team literally fold its tents up and submit to a beating. How this team deals with adversity will determine their success in 2020. That adversity, started Sunday in Tampa.