By now, I think we’ve all come to see that GM Brian Gutekunst’s job performance has been all over the map: a crazy series of successes and failures. At the very top of the GM’s failings list, however, has to be the team’s efforts to acquire competent wide receivers.

If you want to point to why the Packers went from perennially being in the Super Bowl hunt to losing records in 2017 and 2018, you need look no further than the team’s acquisition and development of its pass receivers.

At the top of the list has to be Gutey’s decision to part ways, after the 2017 season, with the sainted Jordy Nelson – when the Rodgers/Nelson combo still should have had at least another two years of solid productivity. Jordy, one of the Packers’ greatest receivers of all time, was let go at age 32 – and just one year removed from a 97-catch, 1,257-yard, 14-touchdown season. Gutey released Jordy after just three months on the job. He ought to be placing a call to Kansas right now!

Gutekunst’s plan ever since he let Jordy go seems to be: quantity over quality – and it’s been a disaster. It started in that 2018 draft, when Gutey selected three WRs – all taken in the middle to late rounds.

After the 2018 season, when the Pack finished below .500 for the second straight time, his response was to not pursue a new contract with 8-year vet Randall Cobb. His strategy: let’s stand pat with what we’ve got.

As to the team’s three receiver draftees of 2018, J’Mon Moore never did a thing, and is out of the league at this time. Marquez Valdes-Scantling is blazingly fast, but in his third season with the team he appears to be at a tipping point – it’s unclear whether he’s an asset or a debit. The third receiver in Green Bay’s draft class of 2018 is Equanimeous St. Brown, who has been plagued with injuries – he’s been on Injured Reserve ever since before the 2019 season.

After the 2019 campaign, the GM parted ways with Geronimo Allison, an undrafted guy who it took the Packers four years to realize lacked NFL-grade athleticism or talent. The fifth-year pro then signed on with Detroit, but in August he cited the COVID-19 pandemic and opted out of the 2020 season.

Here’s one I’ll bet you forgot: Trevor Davis, taken by Green Bay in the fifth round in 2016. Beset with hamstring problems, in his three-plus years here Davis had but nine catches, and no touchdowns. But for his kick and punt return prowess (though he had no TDs there either) he undoubtedly would have exited earlier. He has since played for three teams, but mostly as a return specialist. Currently he’s a free agent.

Leading into 2020, Gutekunst decided to replace his several departed receivers with one average, stop-gap guy. He chose 5-year veteran Devin Funchess, and worked out a goofy deal with him: one year, with a base of $1.25M, though with incentives that could have made it worth as much as $6.25M.

A word or two on Funchess. Ed Rooney reports that he opted out to spend “time caring for family members that have contracted COVID-19.” Normally I wouldn’t question one’s family-related decisions, but this virus isn’t like cancer – you basically either recover or die in a matter of a few weeks. I’d say that Devin is burned out on football, and that Gutekunst and the team got badly burned by him.

In response to his initial failed efforts to find an NFL-quality receiver, Gutekunst opted to do some frenzied bargain rack shopping.

He experimented with Canadian Football League star Reggie Begelton, signing him in January, waiving him in September, and then adding him to the practice squad. The team doesn’t appear to be very impressed with him. 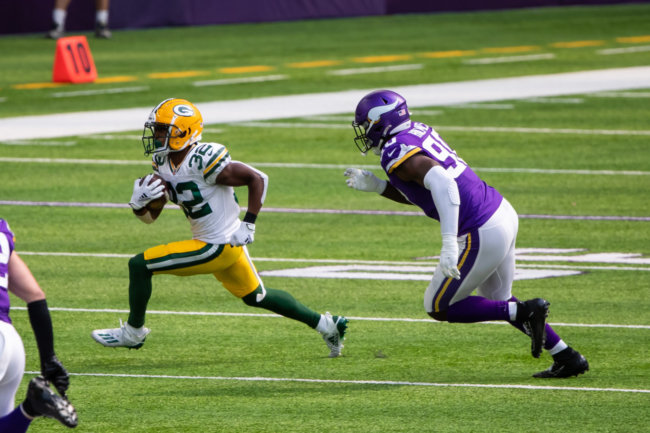 Tyler Ervin, a round four pick by Houston in 2016, has been with Green Bay only since December of last year. I like this versatile guy (RB, WR, kick and punt returner), but he’s in his fifth year, and on his fourth team. Barring injuries, Ervin isn’t likely to ever become a multi-year starting receiver with the team.

Gutenkust also set his sights on Robert Foster. Yes, who? Though he went undrafted in 2018, he signed with the Bills and actually had a decent rookie year with them: 27 catches for 541 yards (20-yard average) and 3TDs. But 2019 was a bust for him, and the Bills waived him just prior to the start of this season. Gutekunst signed him up and put him on the practice squad on September 9. He has yet to be moved up to the active roster. The 26-year-old is a deep-ball specialist, in the mold of Marquez Valdes-Scantling.

Then there’s Malik Taylor. In 2019 Green Bay signed, waived, and re-signed him to the practice squad. This season he was one of the last players to make the initial 53-man roster. To date, the guy who was a big wheel in college at Ferris State (get it?), has gotten 20 offensive snaps, but no stats.

Let’s throw in the similarly named Malik Turner. He spent two years with the Seahawks before signing with the Packers, then being waived prior to the current season, and finally being swept up by the Cowboys – his only snaps with Dallas have been on special teams. 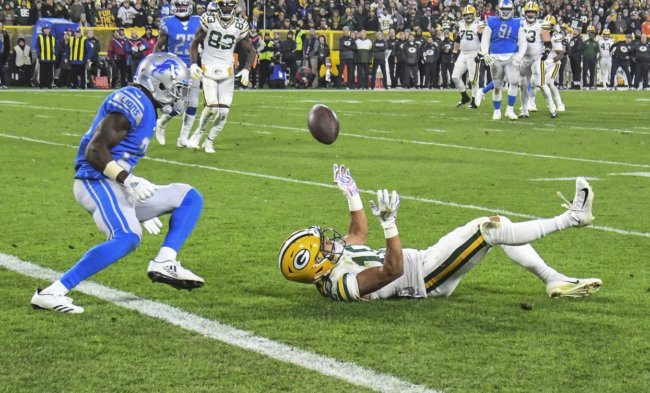 Let’s not forget about Darrius Shepherd. After he was unceremoniously dumped by the Packers in October of last year, it appeared the NFL, had seen the last of him. Not so, as the scatback/receiver out of North Dakota State was re-signed by Green Bay in January, then waived in December, then put back on the practice squad. On September 26 he was brought up to the active roster. He actually got 23 snaps on offense, and was targeted once, against New Orleans.

In the front office’s next move, the Pack signed former Seahawks receiver Caleb Scott. He has decent, but not jaw-dropping athleticism. As to college achievements, in four years at Vanderbilt, he caught 72 passes for 1,061 yards and four TDs. Is there any surprise that this guy, who averaged just over 250 yards and one touchdown per season, went undrafted in 2018? In all his time in Seattle, he never appeared in an NFL game.

It came as a surprise to many that the Packers’ original 2020 roster list failed to include Jake Kumerow. Out of Wisconsin-Whitewater, Jake has spent five years, with four NFL teams, without gaining much traction in the league. Kumerow joined up with the Bills after being let go by Green Bay.

The latest move by the Pack’s personnel swami (sorry, PF) came on October 1, and it’s a doozy. Receiver Juwann Winfree is now on the Pack’s practice squad. His resume includes: playing for three different colleges from 2014-18; a best NCAAF season of 325 yards and two TDs (he also played a season with a community/junior college); being dismissed from one of these teams for a conduct code violation; an injury-riddled college career, including a torn ACL; somehow being drafted in the sixth round by the Broncos, and quickly going on Injured Reserve; and mediocre Pro Day athletic scores (4.50 dash, 33-inch vertical jump). 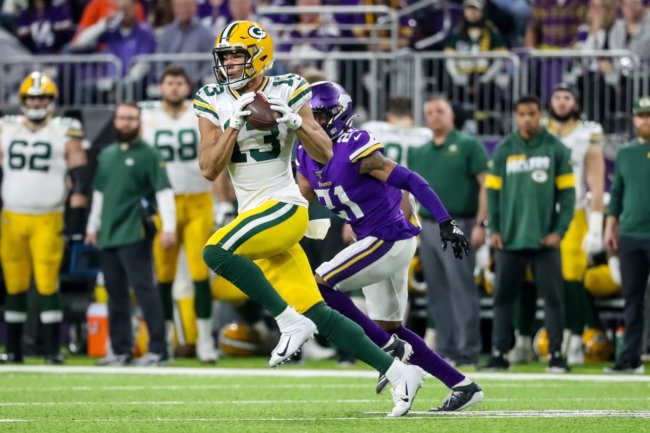 Allen Lazard is the one undrafted (in 2018) receiver who appears to be panning out nicely – in fact very nicely, for Green Bay. You know his recent exploits, though he got his start with the Jaguars and was waived and made available to the rest of the league as recently as the end of August 2019.

Despite all of Gutey’s wheeling and dealing, the Packers seriously lack depth at receiver. After Davante Adams, Lazard, and MVS, the other receivers on the roster are Tyler Ervin, Malik Taylor, and Darrius Shepherd – two of whom sometimes line up in the backfield.

And now we have the breaking news that Lazard just had surgery and will be out indefinitely! (Note: I wrote the rest of this post a day before the bad news about Lazard came out.)

For all three of his years as GM, and even a year or two before that, there’s been a painfully obvious need for the Packers to acquire higher-quality wide receivers. Gutekunst’s continual thrift-store shopping and playing of musical chairs with his wide receivers now puts the 2020 season in jeopardy.