This was not the way Brian Gutekunst and Matt LaFleur planned to solve the Packers inside linebacker deficiencies. Only 28.2 percent of players drafted in Rounds 4, 5, 6 and 7 were retained at the end of their first contract. Seventh round picks have the lowest retention rate of any round of draft picks. By your third year, odds are your seventh round picks are no longer with the team that drafted them, or on any NFL roster. A seventh round starter in year two? You’re better off buying a lotto ticket.

The Packers 2019/2020 offseason tried to focus on upgrading the inside linebacker position. The Packers showed dependable Blake Martinez the door. Packer braintrust refused to invest big money on a player with coverage liabilities who lacked a history of impact plays or the ability to create turnovers. The Packers signed a lower priced experienced free agent, Christian Kirksey, gambling on his troubled injury history. That wager has not paid dividends. Kirksey is on IR and his pectoral injury may be similar or even related to a pectoral injury that ended his season and required surgery in 2019.

The Packers drafted a highly regarded player in Kamal Martin in the 5th round. Martin would have gone higher but he also had an injury history. Again, the Packers gambled on that injury history, and so far have lost their ante, although his hand has not been fully played. He is eligible to return after the bye week against Tampa Bay. 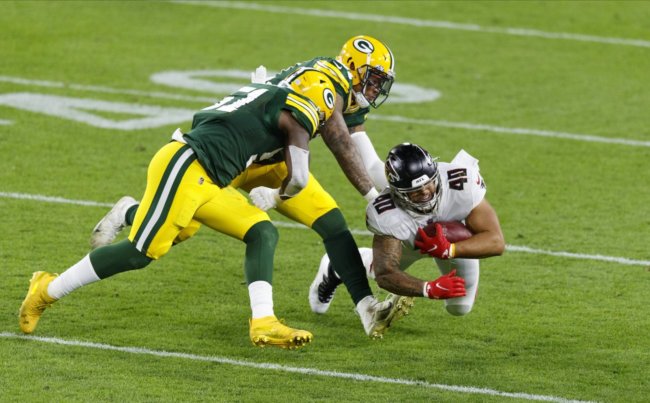 Now the Packers’ best options at inside backer are 2019 seventh round pick Ty Summers and rookie UDFA Krys Barnes. Summers and Barnes have shown incremental improvement and faults based on a review of the small number of game day snaps they have played. Summers is fast and can get to the hole — on many plays better than Martinez. He has been exposed trying to tackle premier NFL RB’s. To be fair, he has gone up against the Saints Alvin Kamara and the Falcons Todd Gurley. That is a master’s degree crash course for a first time player. Each of those prior MVP quality backs can make one defender look foolish and any D-Coordinator would emphasize gang tackling to ensure success. That said, improvement is required or he will be replaced.

Barnes is already drawing positive feedback for his play. He was named by PFF as one of their defensive rookie All Stars. They praise both his tackling and pass defense. If Barnes continues to progress he could be the best defensive player in the Packers 2020 draft. But that development must come quickly if the Packers Super Bowl dreams are to become a reality.