by Jason Parker
in Articles & Analysis
58

The surprisingly successful Packers will face the surprisingly unsuccessful Atlanta Falcons at Lambeau Field tonight for some Monday Night Football. Packers’ offense has been on fire so far this season while the Falcons’ defense has been abysmal so we should see another high scoring game for the Pack. Sportsbooks are heavily favoring the Packers to win this one.

WR Davante Adams tweeted this earlier about not being able to participate, but the tweet seems to have since been deleted: 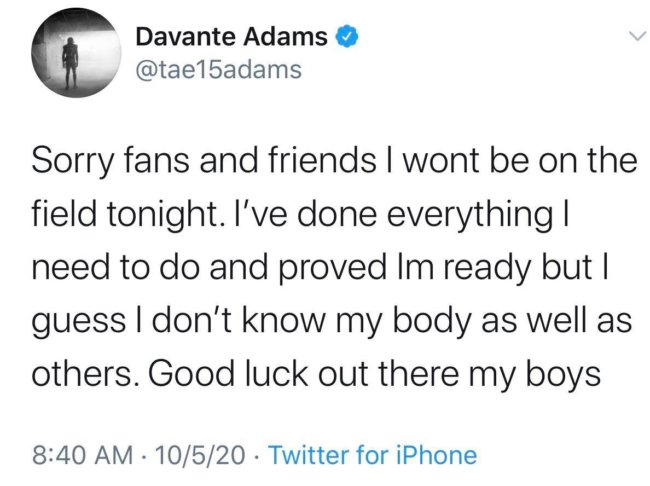 The tweet’s deletion is more likely due to the passive-aggressive nature towards the end, but Adams’ frustration is perfectly understandable.

Packers’ WR Davante Adams announced he’s out for tonight’s game against the Falcons. He has felt ready to play but the Packers’ medical staff has been cautious with him, especially with Green Bay on a bye after this week.

This means that both WR1 Davante Adams and WR2 Allen Lazard(who is now on injured reserve) will not be participating tonight. The Packers are able to move two receivers from the practice squad today. Either way, the Falcons defense has resembled swiss cheese lately so our chances are still pretty good.

I’ll say this now: Given the circumstances, if WR Marquez Valdes-Scantling does not come through with a big game: he’s officially useless. This is the day that MVS is supposed to shine. The stars are all aligned for him.

#Falcons WRs Julio Jones (hamstring) and Calvin Ridley (ankle) — both listed as questionable — will play tonight against the #Packers, per source.

There will be no fans in attendance
This is the second MNF meeting between the Packers and Falcons in Green Bay — The previous meeting was in 2014
The Packers have started 3-0 in back-to-back seasons for the first time since 1965-66
QB Aaron Rodgers is currently the highest rated player in the league, according to Pro Football Focus
Green Bay has won seven of its last nine home games on MNF
Rodgers has played in 17 Monday games, recording a passer rating of 98.1 that ranks No. 3 among active players
Green Bay head coach Matt LaFleur served as Atlanta’s quarterbacks coach for two seasons (2015-16)
Falcons defensive coordinator Raheem Morris and offensive line coach Chris Morgan coached alongside LaFleur for the Washington Football Team between 2011-13
Packers tight ends coach Justin Outten served on the Falcons’ coaching staff from 2016-18
Falcons senior defensive assistant Bob Sutton coached under Packers defensive coordinator Mike Pettine when Pettine held the same position for the Jets from 2009-12

When: 7:50 PM (CT) [This was recently changed due to the Patriots – Chiefs game being rescheduled]
Where: Lambeau Field
Television: ESPN
Radio: 101 WIXX / Newsradio 620 WTMJ